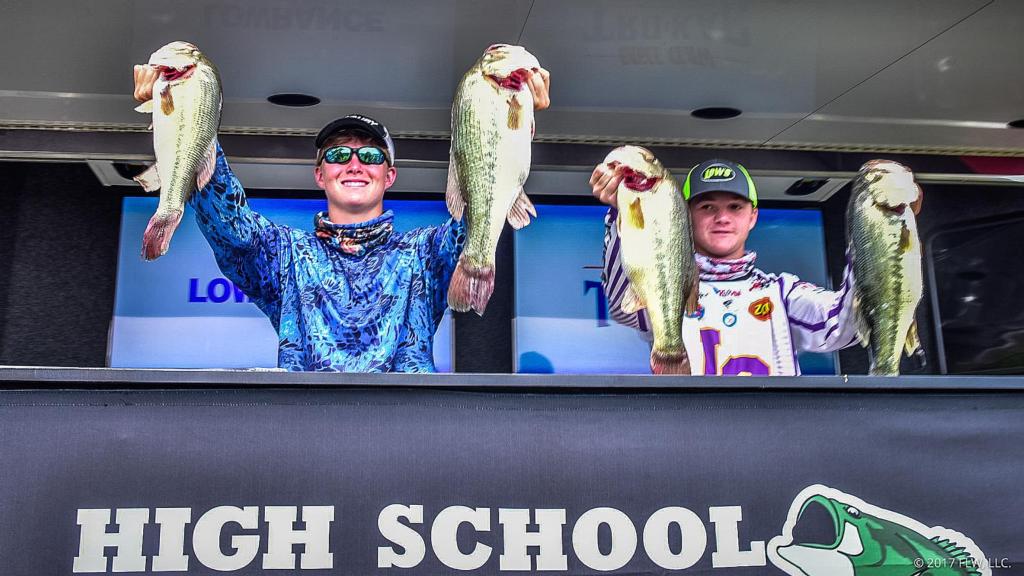 The weather was scorching hot, the shad were sulking on the bottom, the current was practically nonexistent and the wind was blowing against it anyway. On what was arguably the worst fishing day of the week, the team of Jon David Bedford and Walker Brown of Tennessee’s Lawrence County High School rose to the challenge and won the Student Angler Federation’s 2017 High School Fishing World Finals with a five-bass limit weighing 24 pounds, 9 ounces.

Hayden Reed and Brandon Johns of Summit High School of Spring Hill, Tenn., finished second with 22-00, while Fisher Omans and Steven Steinard of the Seminole Junior Anglers of Oviedo, Fla., were third with 20-04.

More than $170,000 in scholarship money ­– including $24,000 from Bethel University in McKenzie, Tenn., to each member of the highest-finishing junior or senior team, $20,000 from FLW and The Bass Federation, and $20,000 from Boone College in Muskogee, Okla., to each of the highest finishers – were awarded to the teams at the top of the standings, but all of the top 31 teams in the championship round won prizes ranging from fishing tackle to big-screen televisions, trolling motors to fishing kayaks.

Not only was the stringer weighed by Bedford and Brown their personal best, it was also the heaviest sack of the week, including the High School Fishing National Championship that was contested over the past three days along with the World Finals. In catching it, the Tennessee youngsters added their own dramatic flourishes to Saturday’s finale. 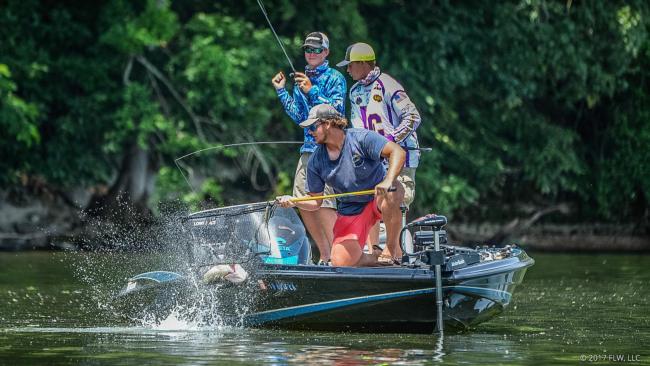 As their day started on a ledge downriver from the John Coffee Memorial Bridge (Natchez Trace), the Tennessee youngsters each lost fish that would have given them a head start of about 10 pounds over the rest of the field. After missing a couple more bites, their coach, Sloan Pennington, gave them a pep talk that refocused them. Fishing was still slow, but a finishing flourish around 11 o’clock sealed the deal for them.

“By Saturday morning they were pretty well wore out for the week,” says Pennington, who’s a sophomore at the University of North Alabama in Florence and an aspiring pro fisherman. “When I would run from one spot to the next, I noticed them nodding off. Their execution wasn’t what it should have been, but in all fairness they spent the last few days getting up at 4, fishing hard all day and then going to Babe Ruth baseball practice back in Lawrenceburg [Tenn.] in the evening. So after we talked about it, they got their focus back and they won the tournament. It says a lot about their determination.”

The team fished Pickwick’s mid-lake area from the bridge to Waterloo, hopscotching from spot to spot, though they were few and far between. As the anglers started fishing their way back upstream in anticipation of returning to Florence’s McFarland Park for the championship weigh-in at 1:30 p.m., they hit a patch of ledge where the bass were “fired up” and ready to feed. Bedford and Brown obliged with Jenko Fishing Booty Shaker Swimbaits (white with golden belly) and Davis jigs with Strike King Rage Craw trailers (green pumpkin).

“We caught all our biggest fish there,” recalls Bedford, who, like Brown, will be a sophomore when school resumes later this summer. “It was really game on for a while; for long enough to do us some good.”

That same pattern of being on the right stretch of ledge at the right time characterized the fishing at Pickwick all week, though the runners-up, Reed and Johns, left the ledges and concentrated on fishing isolated wood cover in Coffee Slough. They caught a limit by 6:30 Saturday morning, and then spent the next few hours culling fish.

“We fished in about 7 feet of water with Texas-rigged Zoom Brush Hogs – anything dark in color – all week,” says Hayden. “We got on those fish Friday and had about 18 pounds. No way we weren’t going back there.”

It would have been difficult to pick a pre-tournament favorite, but chances are nobody would have picked a pair of shallow-water specialists from Florida who fished out of a flats skiff. Omans and Steinard proved they were equal to the task with their third-place showing. The National Championship that was held concurrently with the World Finals began Wednesday morning, and that’s when the pair settled on a ledge just upriver from Natchez Trace. Each day they ran to it and spent the entire day there.

“We must have caught 60 pounds of bass this week from that one stretch,” says Steinard, a junior. “If they were biting when we got there, we could really catch them. If they weren’t biting, we really had a hard time getting them to fire up. We might go for hours in between bites, but we couldn’t leave because we knew the big fish were there.”

Omans proved that Saturday morning with a 7 1/2-pound bass that was the day’s biggest. He caught it on a Zoom Mag Trick Worm (black) rigged on a shaky head.