The Most Memorable Fish of 2017 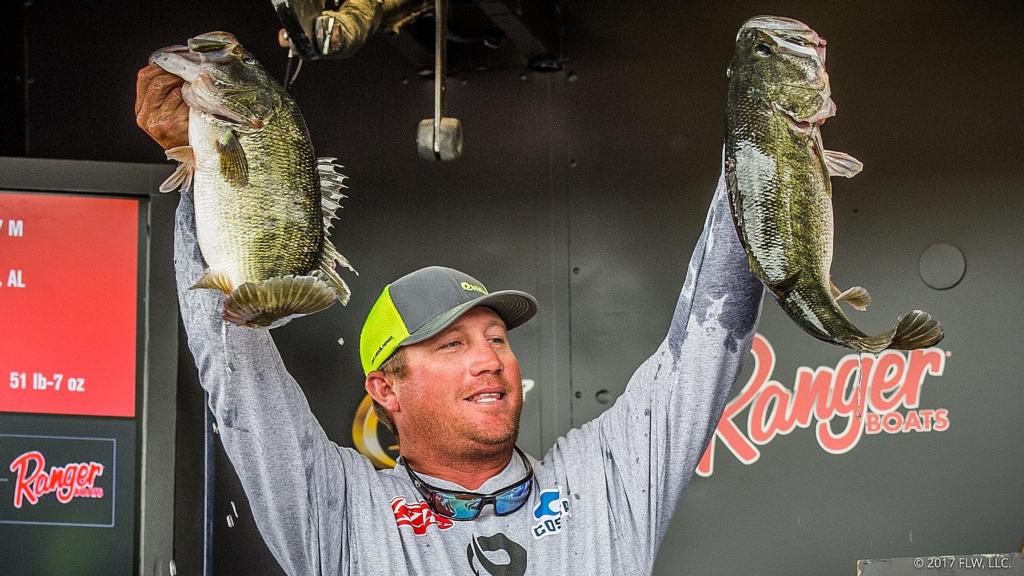 The single most memorable fish of the 2017 FLW Tour season might have been caught at the first tournament of the year, when Mark Rose made one last cast and caught a 6-pounder to best Bryan Thrift at the opener on Guntersville. Of course, there were thousands of other bass hooked the rest of the season, so it’s not like Rose’s fish stands alone. The following fish are the ones that are still stuck in the minds of Tour pros – for both good reasons and bad. 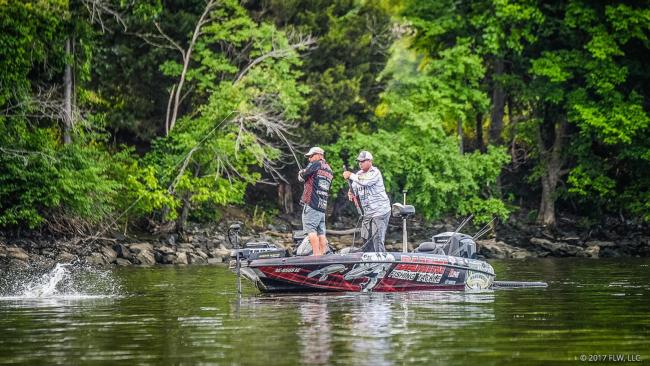 Bryan Thrift took the Angler of the Year lead after his top 10 at the Harris Chain and never relinquished it, so it’s natural that his highlight would be related to his second AOY crown.

“My fifth keeper on the second day at the Potomac River was my most memorable,” says Thrift. “It was a 3-pounder, and I caught it on a Damiki Stinger, and I knew I had won Angler of the Year when I put it in the net.” 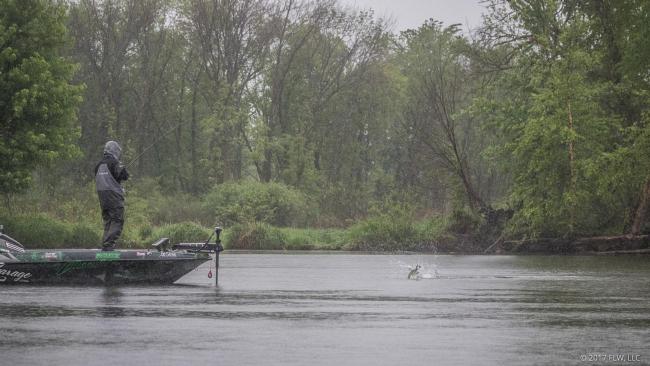 Jeff Sprague has gone into the weekend of an FLW Tour event with a chance to win a few times now, but he’s never quite sealed the deal. This year at the Mississippi River, Sprague went into day three in fourth place, within easy striking distance of the lead. It all fell apart from there.

“I broke off the first fish I hooked, and I saw it was a 4-pounder. That set the tone for the rest of the day for me,” says Sprague. “Then I broke off two more behind him, and that was the first time I’ve been spun out in like two years. I was like a beat dog. I didn’t even know what to do with myself anymore. That one fish set the tone for the day, and cost me who knows what.”

Sprague finally figured out what was wrong, but by then it was too late.

“I had gotten some bad tungsten at a tackle shop, and I didn’t know it was bad until I found out the hard way,” he says. “I may have broke off more than that. I know I broke off four fish in total, because I bought two packs of those weights and broke off all four of them. Then I went back to the original weight – I had one that was all shiny and silver – and caught the rest of my fish on it.” 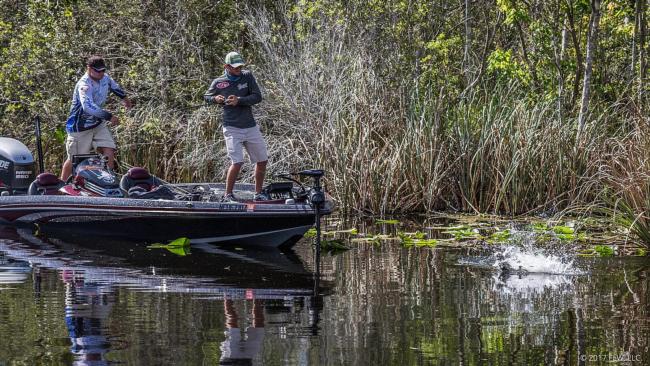 For Shane LeHew, the fish of the year was simply an oddball that he flipped off a bed on day one at the Harris Chain.

“I guess it was probably a 6-pounder,” says LeHew. “I was flipping for a keeper, and out of nowhere it just decided to swim up to the bed and lock on. I caught it in two flips. It only helped me by a couple pounds, because honestly I had all 4-pounders by the end of the day, but it was the weirdest bed fish I’ve ever caught. It just swam up there out of the canal. I’ve never seen one just come from out of nowhere and immediately lock on. She was pretty stupid I guess.” 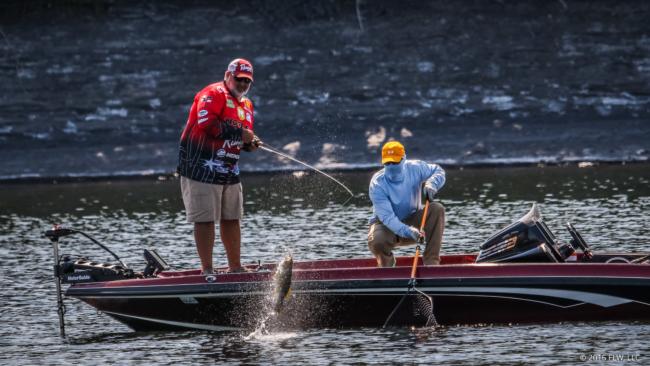 Putting together a pattern is often the key to tournament success, but sometimes it takes a little longer than you’d like. Such was the case for Jamie Horton as the clock was ticking down on day two at Lake Cumberland.

“I needed two fish with 30 minutes to go, and I was throwing a spinnerbait, trying to cover water, mainly just trying to get slapped because then I could catch him on a Senko,” says Horton. “I needed at least two 2-pounders to possibly get a check. I was going down the bank, and I got to a waypoint of where I caught one that morning. When I got to where I had caught that fish I looked down and saw a rock in the water, and it dawned on me that I caught that fish off a rock. So, I ‘crunk’ my boat up and idled down the bank to where I saw some rocks and fired the spinnerbait in there. On my first cast I caught a 6-pounder. And then on my next cast I caught like a 13-incher [spotted bass]. I caught two keepers because of that rock.” 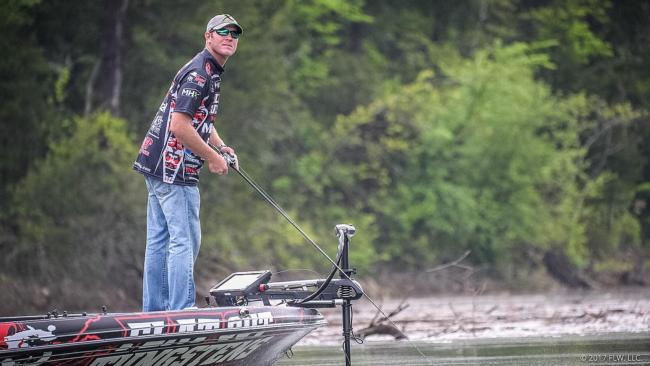 You can usually count on Brandon McMillan to crush in Florida, but this season he booked great finishes all across the country. One lasting memory for him when he missed a cut at Lake Cumberland.

“I lost three great big ones on the second day of the tournament,” says McMillan. “I kind of figured out how to catch some better fish, and I found one tree the first day of the tournament and got a bite and broke off. I went back to the same tree the next day, flipped in there and set the hook, and like a 6-pounder came up and came off. I came back about an hour later and lost about a 4-pounder. Then just before I had to leave I went back there, set the hook and lost her, too. I don’t know why I kept losing them there. One of them would have been close to enough to make the cut. If I’d caught all three who knows what would have happened. We’re going back there, so hopefully I can get another bite there next year.” 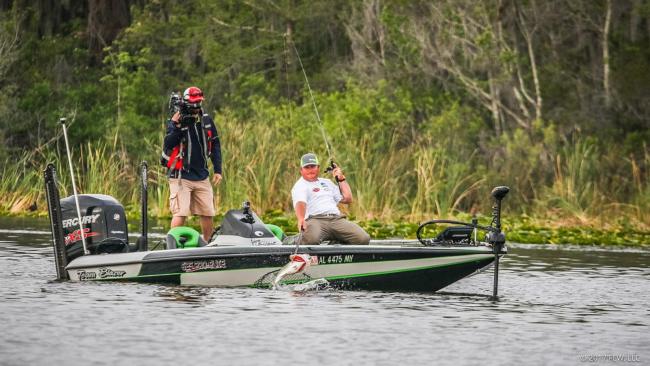 It’s no surprise that for Bradley Dortch, the winner at the Harris Chain, the defining moment of the season happened in Florida.

“It was on the final morning,” recalls Dortch. “It was the one I foul-hooked with a Rat-L-Trap. I thought it may have been a gar by the way it was acting, so I started to try and snatch it out because I didn’t want to tolling motor into my best patch of grass. And then something told me it might be a bass, and I trolled in there and got it. It was buried in the grass, and when I pulled up I said, ‘Oh Lord, it’s a bass.’ If I had just snatched it then I wouldn’t have won. The day before I lost one that was foul-hooked in the tail, but I’d caught a big gar in there in practice, and for some reason I figured it was better to be safe than sorry.” 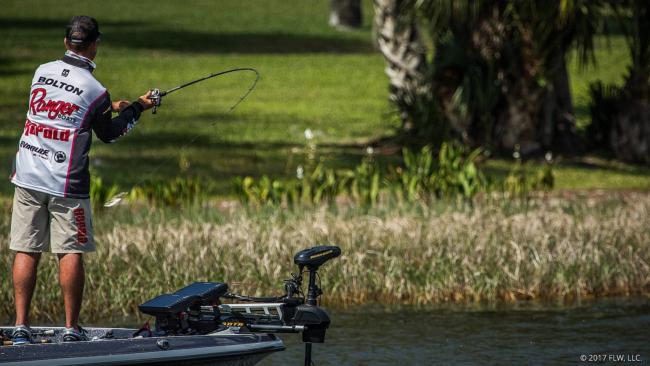 “I caught a bass the second day at the Harris Chain with about 15 minutes to go before weigh-in that was probably in the 6-pound range, and without that fish I don’t get in the top 20,” says Bolton. “I think I had enough time to get the fish, make a cull and then strap my rods and run into check-in with a few minutes to spare. I caught it on Harris. I had found a place down near the boat ramp where I caught two decent fish in practice, and the first day I fished it and caught nothing, but I fished it again at the end of day two. I was throwing a 1/2-ounce Accent Spinnerbait, and it was one of those spinnerbait bites that really clicks it – that really hits it hard. I knew it was a big fish, but I didn’t see it until my co-angler netted it, and then right away I thought I might make the cut.” 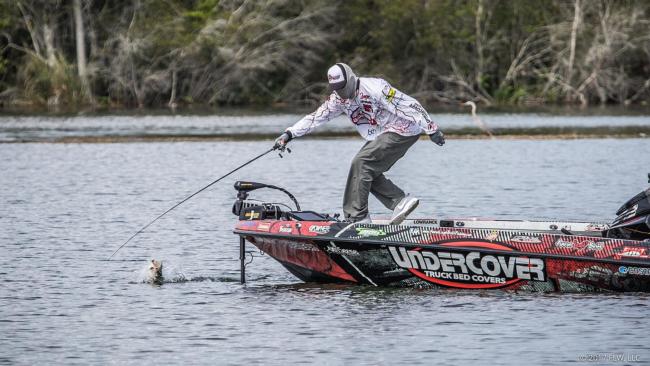 Coming east from California, Aaron Britt had a superlative rookie year on Tour, even making the top 10 at the Forrest Wood Cup. For him, the fish of the year was one in the 10-pound range he wrangled the first time he made the cut.

“It was that big one in Florida; day three on the Harris Chain, on Little Harris,” says Britt. “The morning had been pretty bland. I had five, but I had five for about 4 pounds, 12 ounces. So I got out into the middle near where I’d caught a 5-pounder the day before, bombing around a Rat-L-Trap.”

Just as Britt was explaining to his marshal that the fish seemed to bite when his lipless was running into the grass, as opposed to when he ripped it out of the grass like is normally the case, the magic happened.

“I think it happened next cast. I couldn’t turn the handle. It just annihilated it,” recalls Britt. “I knew it was big, but it was in the grass almost until I got it up to the boat, and I couldn’t tell how big it was until I got it to the boat. I saw it was huge, and then it pulled back down into the grass. I got it back out, and I got it in the boat, and the hook fell right out. That was a special fish. Fishing that Saturday was great, but it allowed me to make the cut and make my first top 10.”

Britt only weighed 14-6 on the third day, but it was the fifth-largest bag of the day and enough to bump him from 14th to 10th. 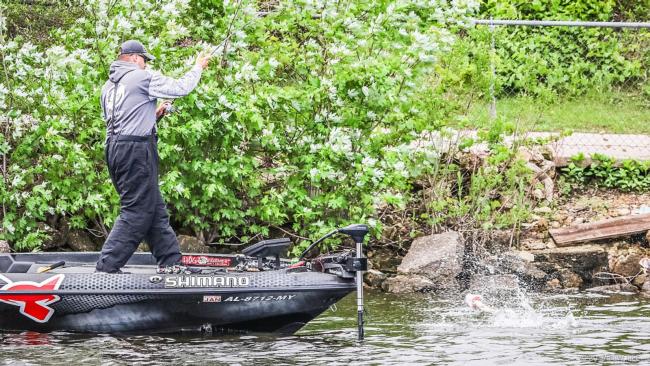 Having a good practice partner can be helpful, but occasionally you have to check up on their results for yourself. Such was the case for Alex Davis at the Mississippi River.

“It [his most memorable fish] was in Wisconsin in practice, and it really wasn’t me. It was dad [Jeff],” says Davis. “We had about two hours left on the third day, and he had about four bites in a row on a Senko. He kept missing them, and he said they were bream. He kept saying they had to be bream, because he kept missing them. So, I threw over and let the fish pretty much swim out to the middle with it, and it was like a 4-pound smallmouth. So all those ‘bream bites’ I thought he was having got me in 12th. It clued me in on the whole deal. I went from having to go fish largemouth in Stoddard with everybody else to having a whole deal to myself. You hear people say they figured it out in the last two hours of practice, and I always think ‘sure you did,’ but it finally happened for me.” 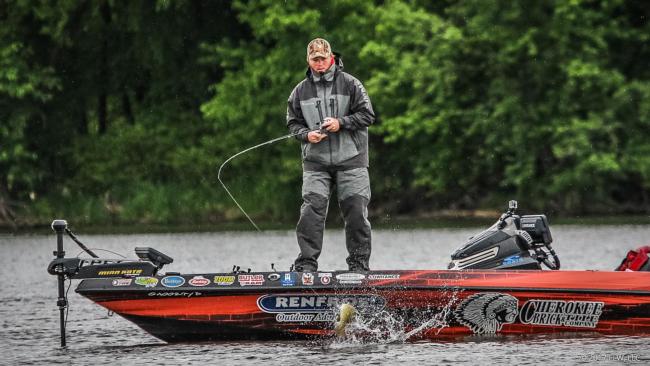 Fishing his sophomore year on Tour, Josh Weaver put up a pair of bombs that contributed to him missing the Cup, but one key loss really sealed his fate and caused him to miss the chance to fish on Lake Murray in August.

“I lost about a 3- or 4-pounder that I had in the net at Beaver Lake,” says Weaver. “It cost me a check and ended up costing me the Cup. My co-angler had it in the net, and instead of picking it up he dropped it down a bit, and the hook came out and it jumped out. That’s the one I have nightmares about to this day. I would have ended up finishing in the 20s instead of the 50s. It cost me, at a minimum, 20 grand.” 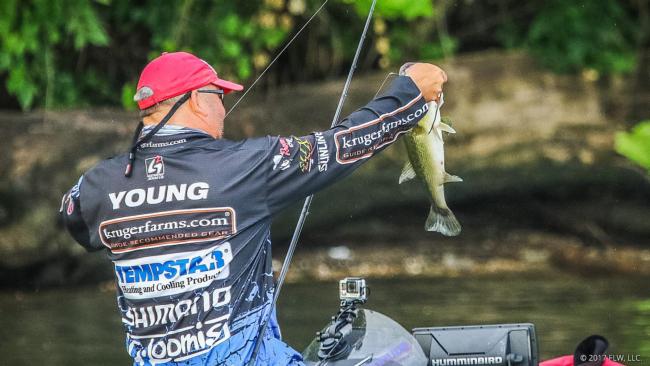 Andy Young’s highlight is a happy one.

“My best finish was at the Potomac, and the most memorable fish from that tournament was the very first fish I caught,” says Young. “I was driving by to go to my first spot, and I saw the waypoint on my GPS, and something told me to go to that little area real quick. I pulled up, and on my second flip I caught a 4-pounder. And then I went on to catch all my big fish in the tournament out of that little area.”

What’s the most memorable fish you caught in 2017?