Top 10 Patterns from the PanAmerican

How the Americas’ best tackled Lake Okeechobee during the spawn
February 9, 2018 • David A. Brown287619 • Uncategorized

Intimate knowledge of Lake Okeechobee bass not only led Scott Martin and Roland Martin to productive areas; it also helped them decipher a tough bite and amass the winning two-day total of 15.51 kg (34 pounds, 3 ounces) at the inaugural PanAmerican Black Bass Championship at Roland and Mary Ann Martin’s Marina & Resort on Lake Okeechobee.

En route to taking the individual gold medal and leading Team USA to overall gold, the Martins caught most of their fish in the Monkey Box – a large bay surrounded by reed lines and interspersed with lily pads, pencil reeds and junk mats. The winners fared best by throwing Yamamoto Senkos and D Shads on 5/0 Trokar offset hooks into the reeds and meticulously working them with a slow pace. 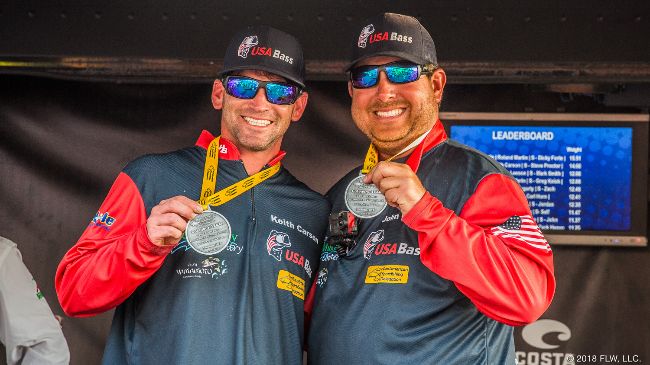 Right out of the gate, fate seemed to stack the odds against FLW Tour pro John Cox and his teammate Keith Carson, as an engine issue crippled them at takeoff on day one. Fortunately, fellow Tour pro Brandon McMillan, who lives in Clewiston, loaned Cox a boat, and, despite the late start and rattled nerves, the U.S. duo sacked up 6.8 kg and placed fourth.

Cox and Carson would go on to add 7.88 on day two and rise to second place with a total weight of 14.68 kg (32-6) to earn the silver medal. They caught their fish in the Monkey Box flipping reeds and mats, but most of their bites came from isolated reed heads.

Carson described a key point that proved impactful both days, particularly on day one, when windier conditions challenged casting.

“We were fishing the same baits on two different lines. I was using 6-pound braided line, and John was using 15-pound fluorocarbon,” Carson says. “My line was so thin it wasn’t catching the wind, so my bait was staying in the strike zone, while the wind was pulling John’s bait right out. I fished behind him and picked up the ones he missed.”

Also, Cox noted the day-two importance of long casts. With the wind dropping to barely a breeze and sunny skies maximizing visibility, fish were on high alert.

“They were so spooky, especially in the slick, calm conditions, so we had to stay way off the reeds when we were casting,” he says. “Also, when we’d move into a new area, we had to let it settle down before we started fishing.” 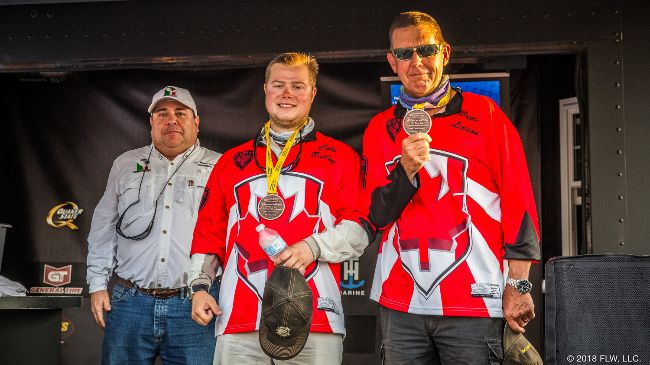 3. Bailey and Leeson flip the script for third

Team Canada’s Cole Bailey and Bruce Leeson turned in a consistent performance by taking fifth on day one with a limit of 6.5 kg and then following with 6.48 on day two. Earning the bronze medal, they ended with a tournament total of 12.98 (28-10).

Bailey says their success hinged on shifting gears and adapting to changing conditions. Day one saw the anglers catching their fish on 1/2-ounce Dirty Jigs Swim Jigs with Gambler EZ Swimmer trailers, but the second day required a different approach

“That swim jig was our primary bait the first day when it was a little cloudy and overcast,” Bailey says. “Today [Thursday], I figured the flipping would come into play because when it gets really hot and sunny, those fish pull into the mats.

“Today, we got on a pretty good punching bite in the mud mats [dead lily pad roots]. We were flipping 3/4- to 1 1/2-ounce weights and rubber punch skirts with either a Gambler BB Cricket, Reaction Innovations Sweet Beaver or a Set the Hook Zaga Craw.” 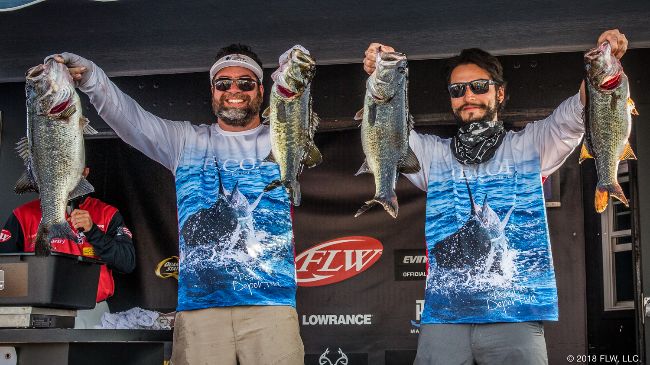 Anytime a team fares well on unfamiliar water it’s impressive, but Team Costa Rica’s Carlos Cabero and Henry Marin hail from a nation with no black bass fisheries within its borders. Therefore, finishing fourth with 12.86 kg (28-6) proved to be one of the event’s most impressive story lines.

Cabero, captain of Team Costa Rica, says he and Marin used 5-inch Gambler Ace stick baits in junebug. Their tactics produced 7.99 kg of bass on day two, which pushed them up from 12th on day one. Their final-day catch included a 5-pound, 7-ounce kicker.

“We were worried, because around 10 o’clock we had only caught little ones,” Marin says. “But we moved to another spot, and it went really well for us.”

Marin noted that precise casting proved essential to their success.

“It was trial-and-error the first two practice days because we didn’t know how to fish for bass,” he says. “At the first part, we tried drifting and letting the baits sink through the hydrilla. That didn’t work that well for us, so we tried to use topwaters, but that didn’t work either.

“Then, we noticed that there was a lot of breeze coming in between the pads and cattails. We started making precise casts, and that started working. We got three big ones in the same spot.” 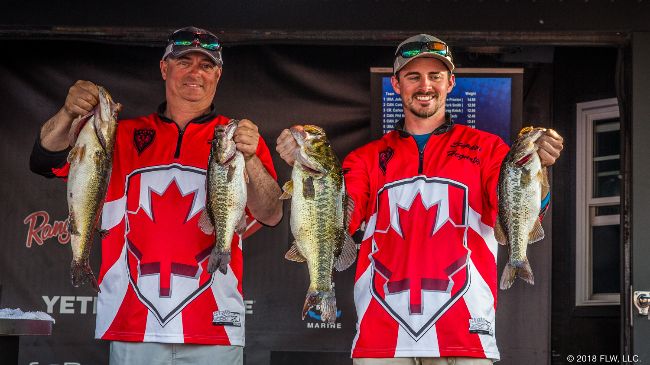 With day two starting strong, the team secured a limit fairly quickly, but then the bite fizzled. Overcoming the urge to relocate paid big dividends.

They tried different baits, but they caught all of the fish they weighed on 3/8-ounce Z-Man ChatterBaits with black/blue Yamamoto Zako trailers.

“I threw a Senko when my arm got tired, but all of the fish we weighed came on the ChatterBait,” Stephen adds. 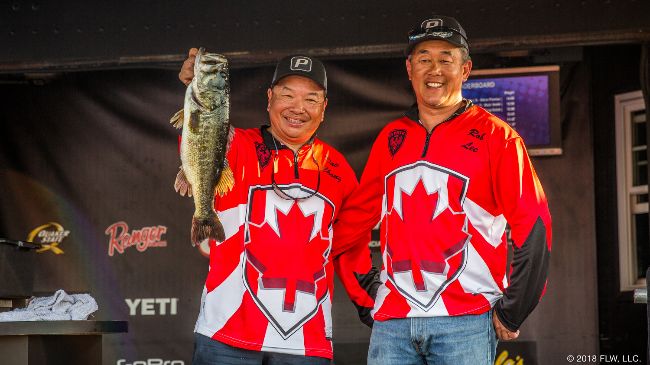 After a strong start that put them in second place on day one with 7.48 kg, Team Canada’s David Chong and Rob Lee struggled on day two when their area turned stingy. After catching 4.93 kg, they dropped to sixth with 12.41 kg (27-6) total.

“We caught them on day two the same way we did on day one. All the fish came on ChatterBaits,” Chong says. “Unfortunately, our area where all our big fish were muddied up today [Thursday]. We checked it a couple of times throughout the day, hoping it would clear up, but by the time we got on some fish, we were on Plan D.

“We stayed south all day. I’ve never been here before, so for me to look at too much of the lake would have been counterproductive. The south is really what we knew, so we stuck with it.” 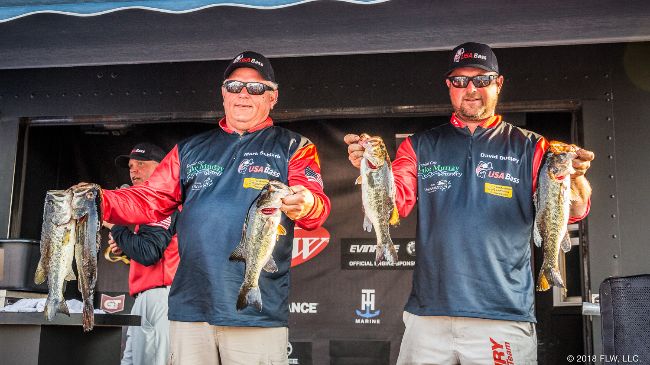 7. Dudley and Schlarb slip to seventh

After leading day one with 7.59 kg, FLW Tour pro David Dudley and his partner, Mark Schlarb, struggled on day two. They weighed a limit that went 4.79 kg and slipped to seventh with a tournament total of 12.38 kg (27-5).

Admitting that the frustratingly fickle tendencies of Florida strain largemouth bass often stump him, Dudley says he probably spent too much time moving when a more stationary strategy might have better served his team.

“I’ve been fishing for a long time, and Florida bass have my number; they are a different breed,” Dudley says. “I think I get a little too antsy. I want to move around and make something happen. But in Florida, you have to get in an area and let it happen.

“We were in the right area [the Monkey box], but if I had to blame anybody, I’m going to point all my fingers at me.”

Dudley and Schlarb caught their fish on a topwater frog, Zoom UV Speed Worms buzzed over hydrilla and a Texas-rigged craw flipped into holes in weed mats and reed heads. 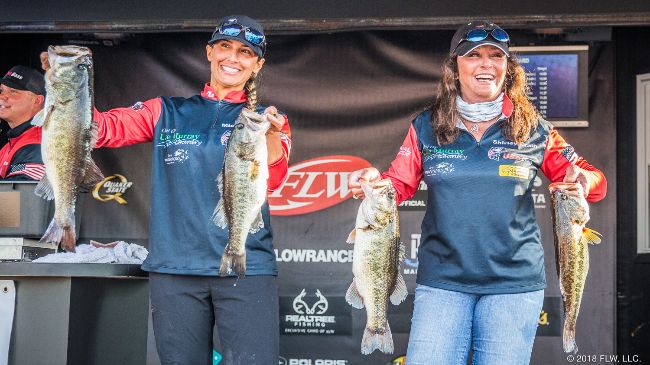 Making the biggest move on day two, Team USA’s Shirley Crain and Michelle Jalaba rose 13 spots from 21st place to eighth by sacking up the event’s second-heaviest catch (behind the Martins’ 23-3 on day two). The only all-female team caught a limit of 8.63 kg (19 pounds) to finish with a total of 11.47 kg (25-5).

Crain and Jalaba caught most of their fish by casting Senkos to isolated reed heads, but when the afternoon brought a little more wind, a Rapala Shad Rap produced a couple of their keepers. Their day-two bag included Jalaba’s kicker that went 5-12.

“We fished south yesterday [Wednesday], and I pretty well wore out my spot,” Crain says. “So we decided we would go north today and fish the Monkey Box. We got into the area, and my second or third cast, I got a 5-pounder. We thought, ‘Well, we made the right decision,’ so we just squeaked it out.

“David Dudley was instrumental in my decision to go north, because he shared the information with me about what he had done the first day. Otherwise, I would not have gone there.” 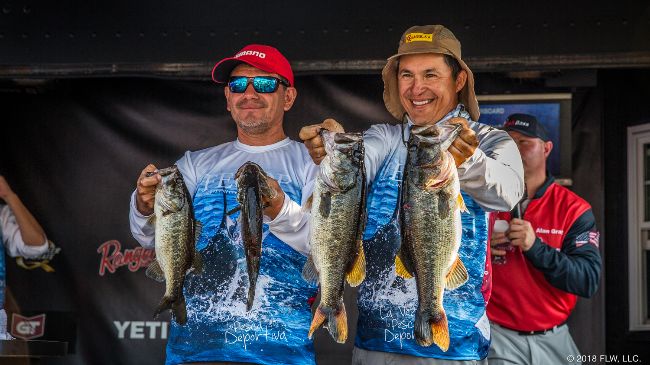 Gaining two spots from 11th on day one, Ronny Villalobos and Maricio Monge finished in ninth place with a final-round catch of 6.4 kg, which included a 5-pound kicker. Fishing with unweighted junebug Senkos, the Costa Rican anglers tallied 11.37 kg (25-1).

“We went to the Monkey Box and fished the tall reeds,” Villalobos says. “We were casting the worms and bringing them slowly.

“We fished two ways: We cast the worms into the tall reeds, but we did better by casting into the small patches [pencil reeds].” 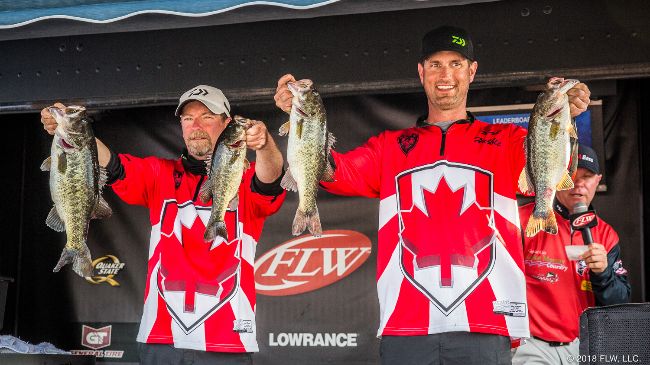 After nabbing a limit on Senkos, green pumpkin ChatterBaits with black/blue trailers enabled Team Canada’s Dave Bairstow and Matt Hubble to sack up a day-two limit of 6.91 kg and move up from 16th place to finish 10th with 11.25 kg (24-13).

“We fished the baits on 7-foot-11, medium-heavy rods with 55-pound-test Daiwa Samurai braid and slow-rolled them,” Bairstow says. “We were touching the tops of the grass, and that’s how we got most of our bites this morning. Around 11 o’clock, we moved outside the hard line and started tying into some fish out there.”