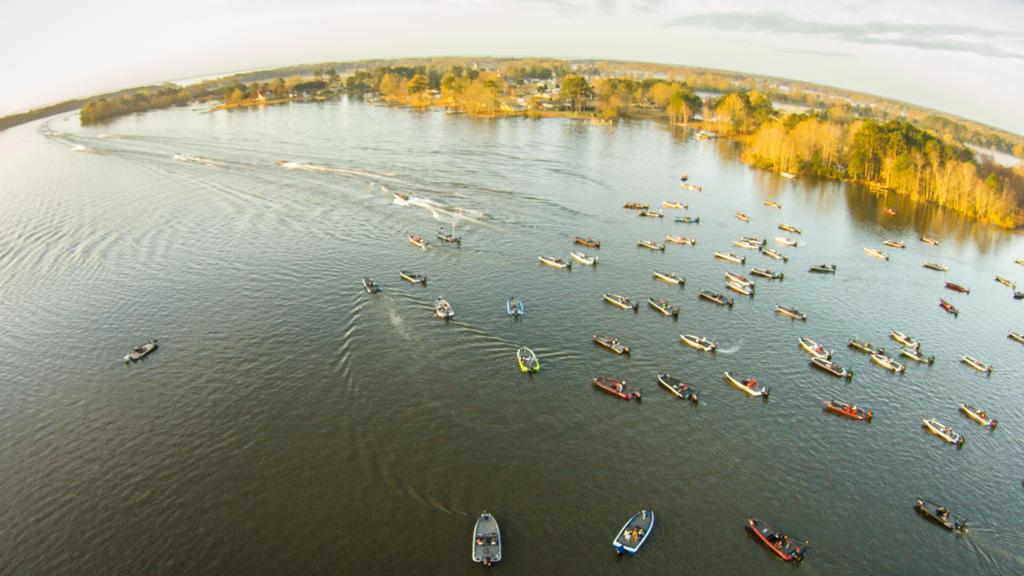 With three T-H Marine FLW Bass Fishing League events, one Costa FLW Series event, a YETI FLW College Fishing event and a Bass Pro Shops High School Fishing Open on the docket, it’s a busy week of tournament action. A quick look at the lakes on the schedule means we should be in for some heavyweight derbies.

Here’s a quick rundown of what’s coming up.

It seems early to wrap up a division, but the Costa FLW Series Southeastern Division will be finishing on Santee Cooper this week. The tournament is presented by Bass Pro Shops, and it will determine the Angler of the Year race as well as the chase to qualify for the Costa FLW Series Championship.

Right now, the AOY race is awfully close. Though Koby Kreiger leads it with 484 points, the top seven are all within 30 points of him, and one of them is Bryan Thrift (who won the event back in 2016). There figures to be some bedding bass to catch at Santee, so it seems like Kreiger will hold on, but the anglers hunting him down are all wicked good.

Based solely on social media, it seems like the fishing should be great at Santee. There’s a full moon now, and the weather looks to be pretty good through the weekend. With any luck, the anglers will get to fish three full days and smash on prespawn, postspawn and spawning bass. In 2016, Thrift sacked up 79 pounds, 15 ounces to claim victory anchored by a 30-pound bag on the final day. Considering the top five in that event had nearly 70 pounds or better, this tournament should have no shortage of monster bags.

Rolling down to Lewis Smith, the Choo Choo Division is continuing its tour of northern Alabama with some spotted bass action. April is a dynamite time to be on Lewis Smith, and the largemouths and spotted bass should both be chewing. A bunch of fish will be caught off beds (either sight-fishing or fishing blind for deeper spotted bass), but there should be a few prespawn and postspawn bass to wrangle as well. In all likelihood, a handful of spots accompanied by a big largemouth or two will combine for a winning weight around 20 pounds.

The second tournament of the year for the LBL Division will probably offer better fishing across the board than the first, but 29 and 27 pounds for first and second will be hard to top. It’s going to be another up and down weather week in western Kentucky, but as spring progresses the fishing should get a little better and more consistent. The lake is projected to begin rising again this week, which should help the fishing, as low water and strong current has recently disrupted the usual springtime patterns. Figure moving baits like spinnerbaits, crankbaits, lipless crankbaits and vibrating jigs to do a lot of work. Tossing an umbrella rig, a swimbait or flipping and dragging soft plastics should produce as well.

The Volunteer Division may fish the prettiest schedule around, as their second stop is on another gorgeous Tennessee Valley Authority reservoir nestled high in the Appalachians. South Holston sits on the Virginia/Tennessee border and it hosts a fantastic smallmouth population and some really good largemouth fishing as well. Expect this one to be mostly prespawn, with perhaps some spawning fish and a few winter Damiki rig fish thrown in the mix. For bass leaning more on the prespawn side, jigs, umbrella rigs, swimbaits and jerkbaits will probably play big. It took 21+ to win in early April two years ago, and a bevy of bags in the high teens hit the scale, so you can probably expect similarly good weights this time around.

The Southern Conference continues its season on Lake Texoma, for what FLW Tour pro Andrew Upshaw thinks will be a sight-fishing fest. Most of the fish are likely to be shallow, so frogs, topwaters, swimbaits or crankbaits could all play. Ideally it’ll take over 20 pounds to win, and with any luck some smallmouths will make an appearance, as Texoma has a good population of brown fish.

Bass Pro Shops High School Fishing takes on High Rock this weekend. In North Carolina, High Rock has pretty good fishing and a ton of docks. There will be some bass on beds in this one, and plenty of others getting up shallow into their prespawn locales. Though docks can be a challenge to fish well, it should be a pretty good tournament for the high school anglers.