Davis Bounces Back … And Then Some 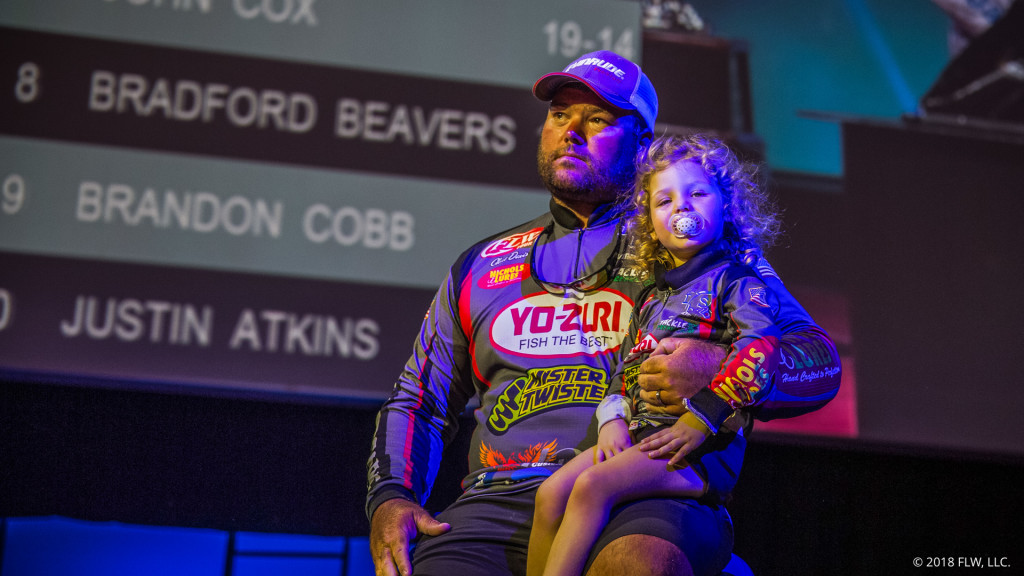 By his own admission, Clent Davis came close to being the Forrest Wood Cup champion that wasn’t.

Davis, of Montevallo, Ala., was crowned the 2018 Cup champion Sunday evening in Hot Springs’ Bank OZK Arena by virtue of a three-day sack that totaled 36 pounds, 13 ounces. In his remarks before the standing-room-only crowd of 9,000, however, Davis noted that he almost decided to forego the 2018 season and return to a job with an Alabama power company.

He attributed his change of heart to a phone conversation he had with Bill Taylor, FLW’s senior director of tournament operations, last fall. Taylor convinced the 32-year-old Davis that instead of giving up a promising career as an angler, he return to the FLW Tour fold. The Alabama pro had fished the Tour through 2015, but then joined the Bassmaster Elite Series. He failed to qualify for the current Elite Series season, however, and was discouraged to the point that he was ready to call competitive fishing quits.

As his victory in the Forrest Wood Cup suggested, it wasn’t a lack of skill, but rather a temporary case of tournament fatigue, that almost made him give up competitive fishing.

“I grew up fishing 24/7. I fished all the time, and then as I got older I started fishing tournaments and staying on the road,” says Davis. “When you’re away from your family all the time and fishing starts to become more of a grind than fun, you tend to burn out some. I got to that point, and when you fish at this level, you’ve got to have a fire in you to compete. I just got to where I didn’t have it.”

Davis got so down on fishing that he sold most of his tackle. Then he talked with Taylor, and his attitude began to change. Taylor told him that returning to the Tour for at least another season would be the best move for him and his young family. A seven-tournament schedule – mainly on fisheries in the Southeast – also would work to Davis’ advantage and allow him to spend more time at home.

“I told Clent that he had a couple of days to make up his mind, but then the opening was going to be filled. Two days later, he told me he was in," recalls Tyalor.

“I thought I was done with fishing, but Bill Taylor had it right. I started getting the itch again around Christmas, and by the time of the Okeechobee tournament [Jan. 25] I was looking forward to it,” admits Davis. “The fun was back in it, and I felt like my old self.”

Davis qualified for the Cup with room to spare, locking down 25th in the standings – his best showing since he placed 14th in the 2012 campaign. He says he’s resolved to give fishing a rest during the off-season, following the example of such Tour stars as Andy Morgan, who spends much of the fall and winter bowhunting.

“I’m done fishing competitively until next year,” says Davis. “Now I’m ready to do something else, and probably that’s going to be doing some sponsor work and enjoying being with my family.

And, no doubt, he’ll also be replaying in his mind the moment of triumph when he was crowned the 2018 Forrest Wood Cup champion.