Gallant and McGarry take second on Bay of Quinte 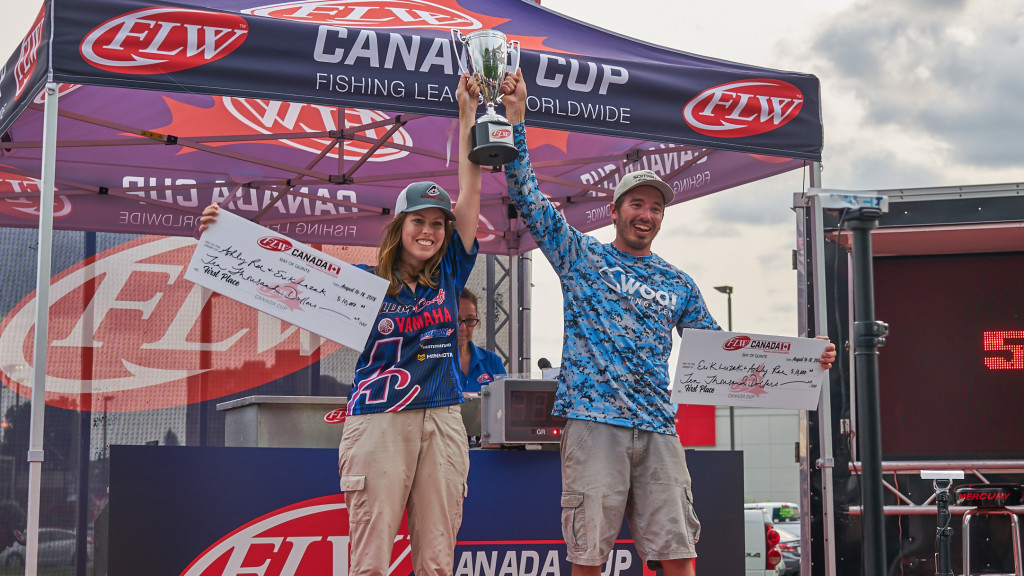 Held on the Bay of Quinte by FLW Canada, this year’s Canada Cup was the qualifying venue for the top two teams to advance to the 2018 Costa FLW Series Championship in the International Division. One member of each team will go to the championship as a pro, and the other member as a co-angler.

Taking first place with a three-day total of 55.55 pounds, Erik Luzak and Ashley Rae won $10,000 and booked their first trips to the Costa FLW Series Championship. In second with a 52.25 total, Cooper Gallant and Danny McGarry will both be fishing the championship for the second time, after qualifying for last year’s on Kentucky Lake by winning the 2016 FLW Canada Championship.

Rae’s blog about the event 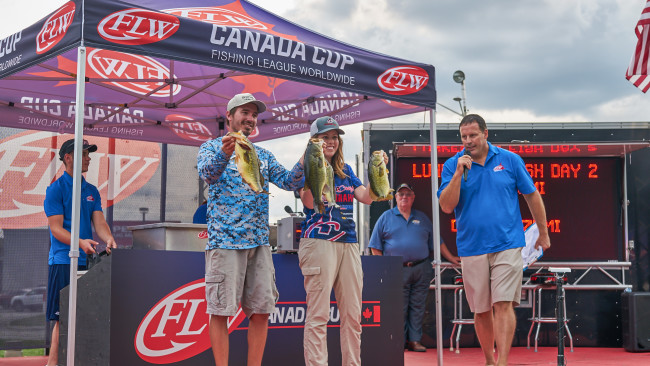 Luzak and Rae team up for first

Luzak is an accomplished tournament angler in Canada, and made his first foray into the Costa FLW Series this year with a 48th-place finish in the Northern Division opener on Lake Champlain. Rae doesn’t fish tournaments much, but does a ton of multi-species angling and grew up near the Bay of Quinte.

“It’s kinda funny how it all happened,” says Luzak. “I wanted to fish the whole Costa FLW Series this year, the Northern Division. I like the schedule. All the lakes were pretty close, but there was a scheduling conflict with the last event on the 1000 Islands and a classic on my home body of water. I ended up only fishing the Champlain tournament, but I was a little bummed I didn’t get a chance to go for the Championship. And then Ashley and I won the Canada Cup, which skipped us right to it.”

Luzak’s typical partner for team events is Tom Hardy, but because only one team member would get to fish as a pro in the Costa FLW Series Championship if they qualified, he went looking for a new partner for the tournament. Having fished with Rae outside of tournaments on the Bay of Quinte before, Luzak knew she was a natural choice.

“I had fished a few tournaments in the past, but they were smaller tournaments in general,” says Rae. “Erik reached out to me when he found out where the tournament was, and that it was on the water where I grew up, and the rest is history. He asked me to join him as a co-angler, so I knew what I was getting into, and I knew we’d have fun however it turned out.”

“It wasn’t me being the pro and guiding the way. It was very much both of us putting our heads together and catching fish,” says Luzak. “I really wish we could both go down [to the championship] together as pros. It’s a great deal that we both get to go down, but she’s earned it just as much as I did.”

How they caught ’em

The Bay of Quinte is an offshoot of Lake Ontario, and when the big lake is off-limits, as it was in the Canada Cup, largemouths are usually the way to go. The top two teams weighed only largemouths.

Targeting mid-depth milfoil patches in about 9 feet of water and shallow grass mats with space underneath turned out to be the winning pattern for Luzak and Rae, but they had to keep moving to make it happen.

“The biggest thing we found is that when we were hitting a milfoil bed or a mat we wanted the wind to be blowing straight into it, to the point where you actually saw the weeds bent over and blowing in,” says Luzak. “We’d go in and make a few flips in the high-percentage spots and then go on. We had kind of a milk run of spots, and sometimes we’d catch our biggest fish the fourth or fifth time we stopped at a spot.”

Luzak says they basically fished seven spots throughout the event, rotating through them as the wind and conditions dictated.

“We just kept revisiting our spots,” says Luzak. “At no point did it seem like we had enough fish to keep putting these bigger fish in the boat, but it just kept happening. We were leaning on our areas pretty hard. Every day we burned a little more for the following day, so it was important for us to pace ourselves. But, we really believe that there were new fish coming up; that the spots were replenishing.”

Luzak and Rae flipped jigs in the deeper milfoil and punched in the shallower mats. When they approached the deeper milfoil Rae would lead off with a bluegill-colored Z-Man Original ChatterBait Elite trailered with a Z-Man Razor ShadZ, which notably produced a kicker on day three. In the milfoil, Luzak flipped a custom 9/16-ounce jig made by his usual team partner. In the mats, Luzak says he flipped 1- or 1 1/4-ounce weights with a Lunkerhunt Core Strength Lunker Craw. 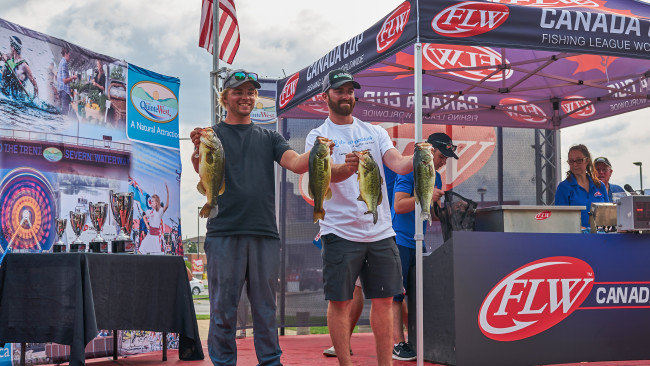 Weighing in 21.55 pounds on day one, Gallant and McGarry started strong in their quest for a second Costa FLW Series Championship appearance. The dynamic duo weighed 18.25 on day two, and then dropped to second on the final day with just 12.45 for a 52.25 total. For second, Gallant will get to represent Canada as a boater for the second year in a row in the Costa FLW Series Championship, and this year McGarry will go as a co-angler.

“After practice we had four primary areas. We were catching all our fish deep, anywhere from 12 to 15 feet,” says Gallant. “We were catching them drop-shotting and cranking. And on day one that’s how we caught that big sack.”

On day two, Gallant and McGarry ran all their deep stuff to no avail. They moved to a 7-foot-deep flat with gin-clear water and a mix of sparse grass, rock and sand. There, they proceeded to catch 18 pounds on a topwater.

“The weather people were calling for the exact same conditions on day three, so we were pumped,” says Gallant. “Sure enough, we rolled up to that flat on day three and there were 3-foot rollers. It was all turned to mud. We hit all our deep stuff again with our fingers crossed, and they weren’t there. So we just put our heads down with three hours left and started flipping and ended up catching 12 pounds.”

For their day-one bag, Gallant and McGarry mixed up a Strike King 6XD and a drop-shot with a 2.8-inch Jackall Rhythm Wave or a 3-inch Megabass Hazedong Shad. Mostly they targeted rock piles with sparse grass where they had dropped a camera down in practice and spotted big largemouths and smallmouths. On day two, they tossed a Strike King HC Splash popper and kept a Yamamoto Senko handy as a follow-up. On the final day, their flipping weapons were a 9/16-ounce Punisher Jig and a Berkley Havoc Pit Boss.

Gallant and McGarry finished 81st and 125th, respectively, in last year’s Costa FLW Series Championship on a brutally tough Kentucky Lake, but they’re both looking forward to going back south for a second shot.

“We definitely both wanted to go down as boaters,” says Gallant. “I think the biggest thing [in the Canada Cup] was the water. Even if we had split up and both gone as boaters in this event, we’d have needed six days of water, three days per person, and we share a lot of water on the bay. We felt like the odds were a lot better if both of us went as a team. I don’t even know how we decided, but I want to give a big shout out to Danny for letting me go as a boater. Since Kentucky Lake last year, I’ve literally thought about going back down every day since. Making it back down is pretty awesome, and it’s coming soon.”

Taking place Nov. 1-3 on Lake Guntersville, the Costa FLW Series Championship brings together the top anglers from each of the five divisions of the Costa FLW Series as well as the best from FLW’s various international branches. This year, FLW Canada will be represented by Luzak, Rae, Gallant and McGarry, as well as 2017 FLW Canada Championship qualifiers Barry Graves, who’ll fish as a boater, and Sean Palmer, who’ll fish as a co-angler. Next year’s FLW Canada Cup is already scheduled for Aug. 15-17 on the Bay of Quinte, and registration is open now.

*All photos provided by Eric Riley