How to Use Umbrella Rigs for Smallies

Scott Dobson's approach for big smallmouths on St. Clair and the Great Lakes 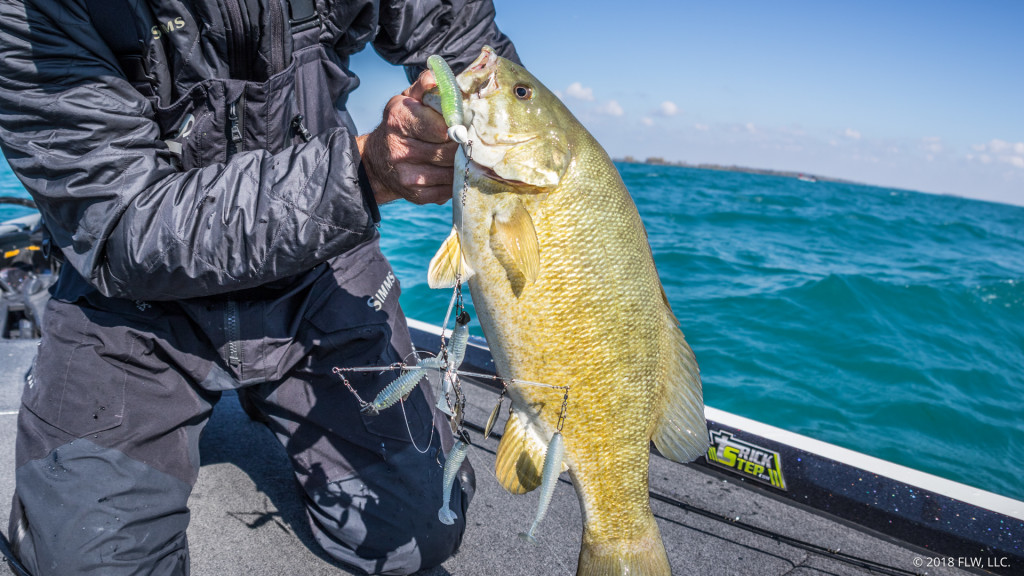 Umbrella rigs took the fishing world by storm back in 2011 when Paul Elias won the FLW Tour Open on Guntersville. Though fairly quickly ruled illegal at the top levels, umbrella rigs (also called Alabama rigs or A-rigs) have gained a foothold across the country as effective producers, especially during the cool-weather months in the South.

Over the last few years umbrella rigs have made consistent appearances for smallmouths in the Costa FLW Series as well. In 2017 at the 1,000 Islands, Chris O’Brien and Casey Smith put them to work for top-10 finishes. In the 2016 event at Oneida, top-10 finishers Smith, Kyle Weisenburger, Ian Renfrew, Lawrence Mazur, Jim Vitaro and Cory Johnston all used rigs.

For the last three years, fellow smallmouth hammer Scott Dobson has been fishing the umbrella rig as well, concentrating on St. Clair, but also spreading it around the rest of the Great Lakes region. It’s been a good tournament weapon for him, particularly in the fall, like when he and Kyle Green weighed 30.31 pounds of umbrella rig smallies to win the Cash for Bass Monster Quest event on St. Clair in October 2017.

If you haven’t tried a rig for smallies yet, his tips should give you a good jumping-off point. 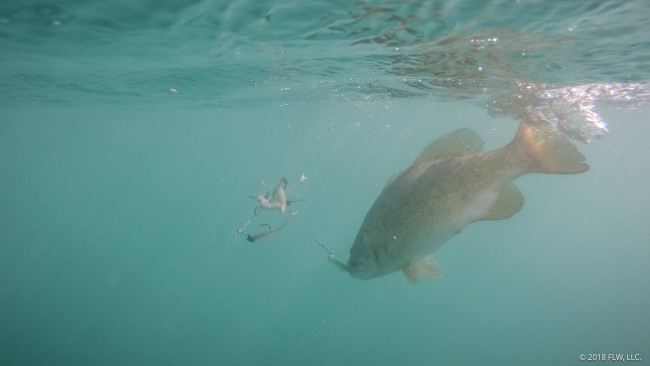 Dobson first started throwing the umbrella rig about three years ago, and he’s expanded on it since then.

“When we first got into throwing the rig it was a year when we were catching them on spybaits and jerkbaits and crankbaits,” says Dobson. “I was fishing a spot where I knew there were fish, and I couldn’t catch them on a drop-shot or anything. I had the A-rig tied up for whatever reason, and I bombed it out there and essentially burned it in. I had three fish come up on it, and one ate it, and it was a good one. I was like, ‘Oh my goodness, I should be throwing this all the time.’”

Dobson’s initial experience with the rig came in late July, and he promptly gave it a tour of St. Clair.

“We went out everywhere we had fish, all over the lake, and for some reason on the Great Lakes with smallmouth, big fish key in on it,” says Dobson. “It works all year round. It works best in the spring and then again in the fall, but you can catch them on it in river situations, out in the lake, and when the water is 50 degrees or all the way to 70 degrees.”

One constant he’s noticed is it gets big bites, despite sometimes not being a numbers bait.

“You’ve got to know that if you commit to it you might only get eight or nine bites on it, but they’re going to be the right ones,” says Dobson. 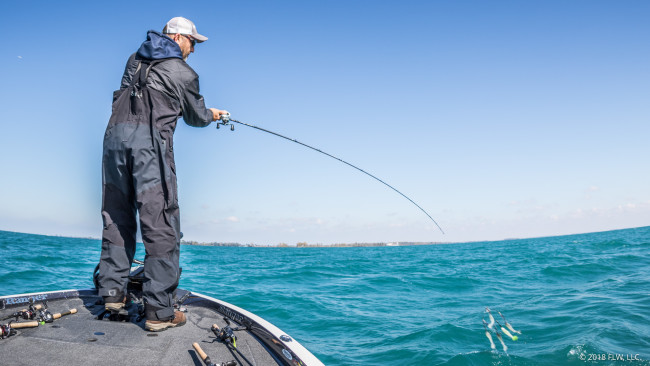 How to fish it

Dobson’s strategy is pretty simple: He casts the rig out, lets the bait sink to the depth he wants it and then slowly winds it in.

“If they’re feeding up, really high or busting on bait you want it higher, but in all my experience it seems to get more bites relatively close to the bottom,” says Dobson. “There are times, especially when it’s cooler, that you want to be dragging it on the bottom, or really close, so it’s ticking the grass or the rocks. That can generate a lot of bites too. But as a rule of thumb, I want to rake the A-rig overtop of the fish, so they’re looking up and can run up and eat it. If I’m fishing in 17 or 18 feet of water, I’m gonna get it down to 15 or 16 feet, and them I’m gonna start winding.”

Dobson says that the vast majority of his bites come at a few key points in the retrieve.

“If you tick a piece of cabbage or a rock you can give it a pop, and that can sometimes generate bites,” explains Dobson. “But it seems to me they eat it on the initial fall, when you engage the retrieve and on the upswing when it comes back up to the boat. They don’t seem to eat it too much in between.”

Dobson will throw the rig around anything – cabbage, rock, breaks, sand spots, current or wherever else there are fish. His preferred depth range is about 15 to 20 feet, though he has occasionally caught fish shallower than 10 feet. In that case, he’s usually winding it pretty fast. The best indicator that the A-rig will shine is the presence of forage that isn’t pinned to the bottom, be it shad, alewives or perch. 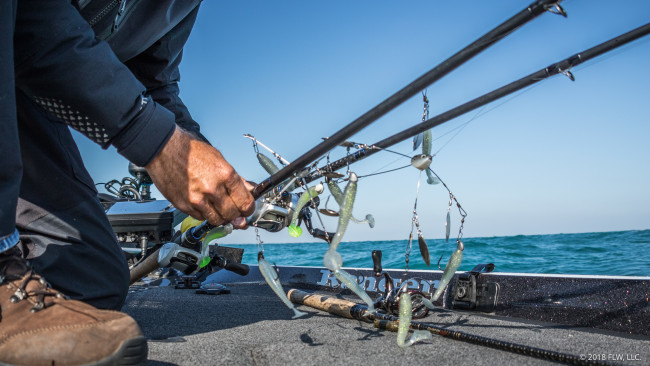 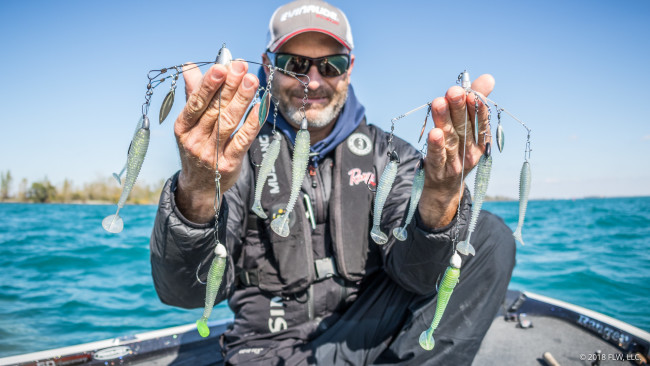 There are a lot of permutations out there for umbrella rigs, and personal preference and confidence can have a lot to do with how much success one has. Dobson has a pretty specific setup he likes to use that is designed for imitating shad, alewives and perch and handling a quantity of Great Lakes smallmouths.

He mostly uses blades on his rig, but if the fish aren’t biting or it’s cloudy he likes to have a rig without blades handy. Silver is his standard blade color, but he’s currently experimenting with a variety of painted blades as well.

Dobson usually fishes the rig 10 feet or deeper, and his typical setup for that is two screw-locks for dummies on top, a 3/8-ounce head in the middle and two 5/16-ounce heads on the bottom. Dobson likes the Strike King Squadron Head and the YUM YUMbrella Money Head the best because they have very stout hooks. When he’s imitating shad he likes white heads, and he’ll go to brown or green heads when he’s imitating perch.

The final piece of the package is the swimbaits, and Dobson pretty much sticks with the Keitech Swing Impact FAT for that. His normal recipe is 3.3-inch baits around the outside and a 3.8- or 4.3-inch bait in the middle. He likes shad colors the best, particularly favoring sexy shad, but likes extra color in the center at all times. Because smallmouths are “really savvy” to chartreuse, he says he often dyes the middle bait’s tail or uses an electric blue and chartreuse-colored swimmer in that spot. 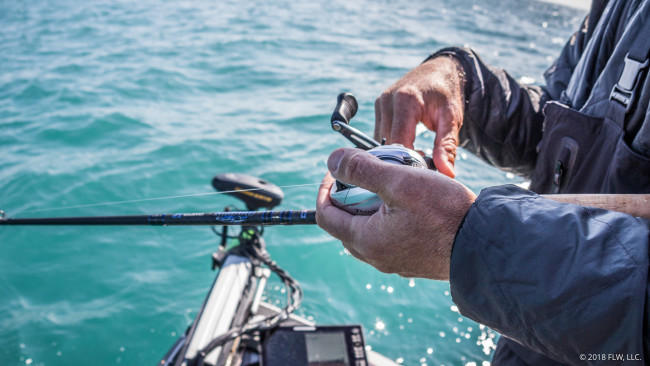 Dobson has gone through a few different setups to complete his umbrella rig outfit. After a lot of testing he’s settled on 20-pound-test fluorocarbon, a Dobyns Champion XP 806CB and a 5.8:1 Shimano Tranx 300.

The rod that Dobson uses was actually intended for throwing baits like a Strike King 10XD, but he says it’s perfect for his umbrella rig needs.

“I started on a flipping stick, and I deemed that to be too stiff of a rod,” says Dobson. “At the end of last year or early this year I went to that 10XD cranking rod. It was designed for big magnum crankbaits, and it’s got a nice parabolic bend that loads up and really springs off you on the cast. And when a fish hits it just loads up on them.

“When you set the hook and you’re fishing a BFL format or a Costa format with just three hooks, you don’t want to jerk and pull the bait away from the fish if they just hit the dummy. You want to make sure the fish actually eats it. With that rod, if you just lean into them and wait until the fish pulls back, it gets them every time.”

Dobson’s choice of a low gear ratio is worth nothing as well. Because of how he fishes the rig, it’s a perfect match.

“You’re slow-rolling the bait. You’re not usually reeling it really fast,” says Dobson. “Something about the retrieve and how I can feel with the 5.8:1 is really good. I get a natural cranking retrieve, and I’ve gotten used to reeling it with that cadence.” 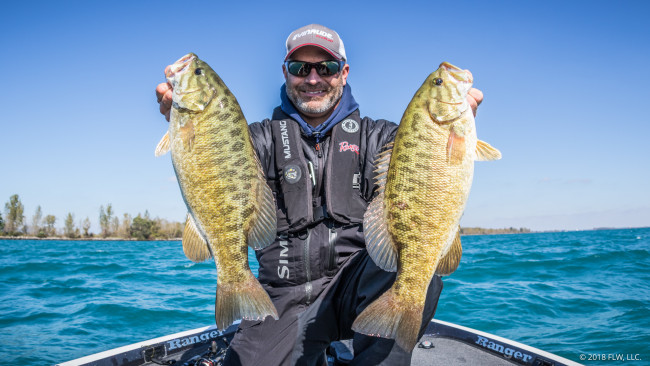 One thing you can do with an A-rig that you can’t with most other baits is actually catch doubles. You have to be patient to do it.

“If you set the hook you’ll never catch a double,” says Dobson. “If you just kind of lean into the fish and let them load up that will give you the opportunity to hook up with number two or number three. I’ve had three on before. I’ve never landed three, but I’ve caught multiple doubles. The only way you can do that is to let the fish swim around down there a little.”

When you do catch a double, it’s pretty great and often pretty awesome. It’s hard to be mad about multiple 4-plus smallmouths thrashing around. 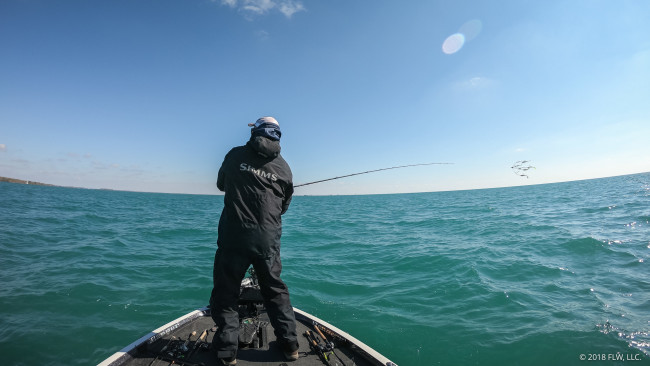 Most folks think finesse when they think smallmouths. That’s totally valid, but it’s also limiting. If you haven’t at least experimented with an umbrella rig for chasing smallies up north you’re likely missing out. Even if you can’t use them in some tournaments, you can almost certainly use them to catch some big fish. Obviously, umbrella rigs aren’t for everyone, but they can be a ton of fun.