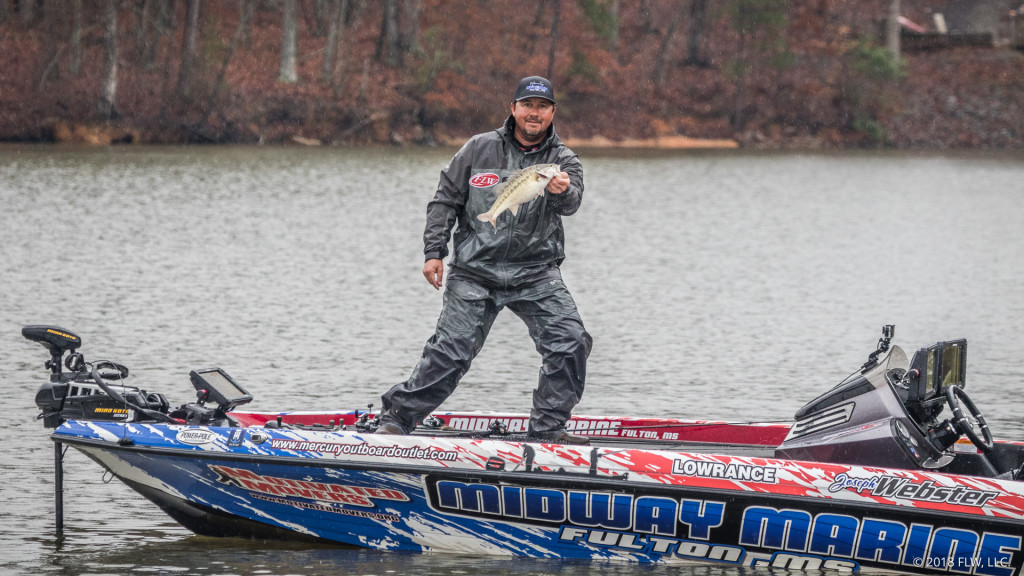 By Late November across the country, a lot of people have switched their focus from chasing bass to watching football and going hunting. Certainly, this time of year can lead to some hit or miss fishing, but don’t give up just yet. As the doldrums of winter creep closer, FLW Tour pro Joseph Webster has a simplistic, yet efficient approach to putting bass in the boat. 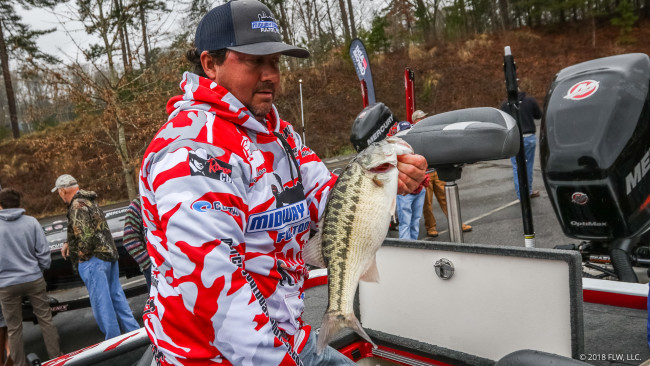 Cool, clear water can scare a lot of people, but for Webster it can lead to some fantastic fishing.

“On lakes like Lanier or Smith where you have spotted bass and largemouths with a really good topwater bite in the fall, they start to get off that as the water cools and they aren’t chasing as much,” Webster says. “The fish are still on the same points that they were on in the fall, but they are grouping up and getting closer to the bottom.”

According to Webster, a small swimbait comes into play once the water drops below 60 degrees.

“By this time the fish are pretty lethargic and pressured, so you need to slow down and downsize your bait,” he adds.

Webster’s tackle set up is simple. It starts with a 7-foot, medium-action Hammer spinning rod with 15-pound braided line and an 8-pound Seaguar InvizX leader. From there, a 1/4-ounce 4X4 Little Head swimbait head (which he helped design) matched with either a 2.8- or 3.3-inch Keitech Swing Impact FAT swimbait creates the perfect offering.

Ideal places for this pattern to unfold can be found on long, sloping points with rocks or stumps scattered along the top. It sweetens the deal if there is a creek channel that swings close to it.

“You can use your electronics to scan to find fish and structure, but it can sometimes scatter the fish,” says Webster. “I just like to put the trolling motor down and fish, starting from one side of the point and working around to the other. Then, I pick up and run to the next one.

“I like to try and keep my boat out in about 40 feet and try to cast up on top of the point. I’d say that the 15- to 20-foot range is where you’re really focusing on. I think you also catch more fish when you pull your bait down the point, versus sitting up shallow and casting out deep to bring it up the point.”

From there, simply fire a cast out and let it fall to the bottom. A slow retrieve is crucial to keep the bait rolling downhill, close to the bottom. Webster points out that ideally, you want your bait on the same level as the fish. So, if they are sitting about 5 feet off the bottom, try to keep your bait at or slightly above that range. In clear water, bass aren’t afraid to travel to hit a bait.

“A lot of people think that when it starts to get cold you need to sit on top of the fish and drop something on them, but I don’t think that’s always the case. The fish still want to eat and are willing to chase a bait that comes by them. That small swimbait works.” 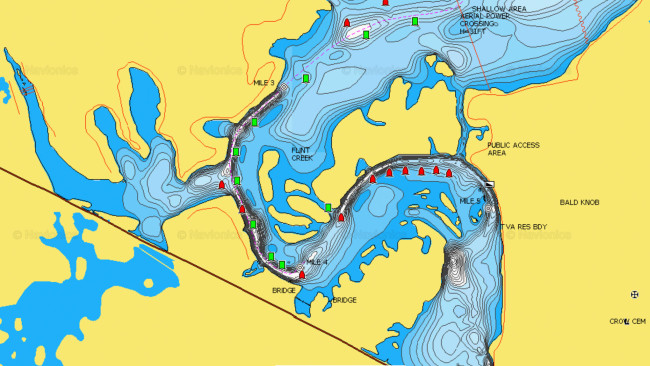 For many reservoirs across the country – and especially in the south – right now is the time a lot of them are going through their fall drawdown. That usually means lots of current and dirty water, which can lead to some frustration if you’re not accustomed to the situation. Being that Webster lives near the Tennessee River, he welcomes it with open arms.

“A lot of lakes in the south right now – like Pickwick – are on their drawdown and the water clarity is about a foot or so,” he says. “The fish really don’t like being out in that heavy current, so they slide towards the shore in deeper water to get out of it.”

Like he does in clear water with points, Webster puts a rod in his hand and bounces from one high-percentage spot to the next – in this case it’s a channel swing bank.

“Channel swing banks on the main lake near the mouths of creeks to halfway back into a creek are really good places to find fish,” explains Webster. “Because the water level is falling there isn’t much cover on the bank, so they have to get in swings where the water is deeper.

“There are two baits I like a lot for this – a Rapala DT6 (hot mustard or Ike's old school color) and a 3/4-ounce chartreuse and white spinnerbait,” Webster says. “The DT6 will get you numbers of bites and help you to find fish. The bigger fish will eat a bigger bait and that’s what I like the spinnerbait for.”

For the crankbait, Webster prefers a 7-3, medium-action Hammer crankbait rod with 10-pound Seaguar InvizX. A 7-foot, medium-heavy-action Hammer rod with either 15- or 17-pound Seaguar InvizX does the trick for the blade – or “ol’ faithful” as he affectionately refers to it. He also adds a Zoom Fat Albert grub (either chartreuse or white) to the back of the spinnerbait to sweeten the offering.

Making casts parallel to the bank is the easiest way to go and often times repeated casts to obvious cover may be needed – like standing timber or a rock.

“I like to start out with the crankbait to get a feel for where the fish are positioning that day. Like I said, you can catch some good ones on it, but usually it’ll put numbers in the boat. If I catch some on a stretch of bank, I’ll turn around and go back through with the spinnerbait and can usually catch a big one or two. It’s a really simple deal, but it works.”