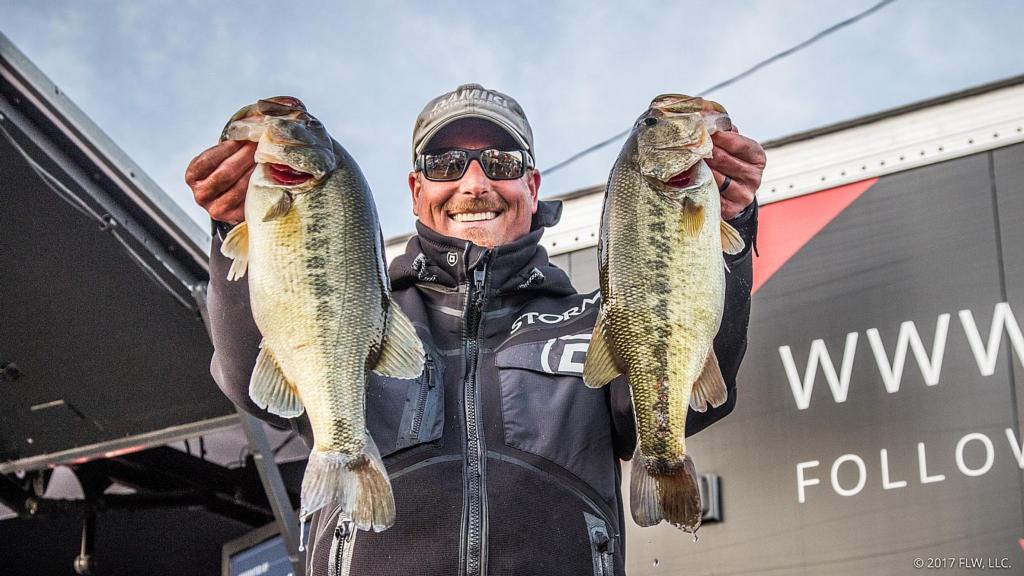 You might not always catch bass as well as Bryan Thrift, but in early December you sure can fish like him by throwing the same three baits he usually has tied on when he’s out fishing in the winter.

By the way, Thrift doesn’t divide his time between fishing and deer hunting in fall and winter. There are too many bass to be caught.

“I fish all winter,” says the North Carolina pro. “That’s the best time to fish as far as catching big fish. But I actually catch numbers too because they’ll really group up in the wintertime, and they don’t roam as much. If you find them, they’ll be there for a number of days or even a week, and you can really have some fun.” 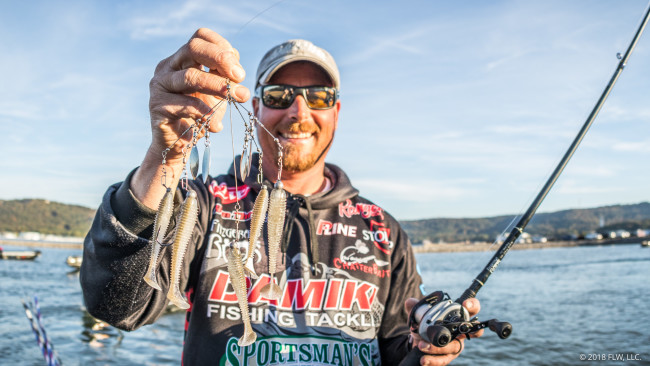 “Shane’s Baits Blades of Glory umbrella rig is probably my No. 1 go-to bait if I’m fun-fishing or in a tournament that allows it. I’m going to have 1/8-ounce jigheads on it with 4-inch Damiki Anchovy Shads,” Thrift reveals. “That’s the ‘funnest’ wintertime fishing you can do.”

The Blades of Glory rig resembles two “standard” umbrella rigs connected in tandem for a total of nine wire arms. Obviously, it needs to be rigged in such a manner that is legally allowed on the waters being fished. It also requires a stout rod. Thrift’s choice is the Okeechobee Rod, which is a 7-foot, 6-inch, heavy-action model in Fitzgerald Rods’ Original Series. He spools up with 20-pound-test P-Line Tactical Fluorocarbon.

“When I first started out throwing the umbrella rig, I threw it on braid a lot,” Thrift says. “I found out you get a lot more bites on fluoro. I think the biggest reason is that the diameter of the braid is so small, and when you throw it on braid, you have to wind it fast to keep it off bottom. But the key to fishing an umbrella rig is to wind it as slowly as possible. With fluoro [which is thicker] you don’t have to fish it as fast, and it’ll stay in the depth of water you’re trying to target.”

Depth varies according to the area, but the most important factor is the bait.

“That time of year I’m looking for baitfish that are schooled up and bass that are actively eating the bait,” Thrift adds. “That’s when you catch those giant, fat bass that are gorging on shad. I’ll fish a main-lake point, creek channel or river channel, but you can catch them anywhere the bait is stacked up.”

“If fish aren’t really reacting to the umbrella rig or they’re closer to the bottom, that’s when I pull out a Damiki Axe Blade,” Thrift says. “It’s a 3/4-ounce tail-spinner with a willow-leaf blade on the back.”

“That seems like light line, but it lets the bait get down to do what it’s supposed to do,” Thrift explains. “After I throw it as far as I can, I let it pendulum down to the bottom. Then I kind of yo-yo it off the bottom and let it swing back down each time. Don’t rip it like you’d rip a spoon. Lift it up with the rod straight up, wind two or three times, and let it fall back down on a tight line. It’s not falling vertically; it’s falling toward you.”

Thrift fishes the tail-spinner in the same areas as he fishes the umbrella rig. He says he’s not as concerned about structure as he is locating balls of bait that are on the bottom and being actively pursued by bass. 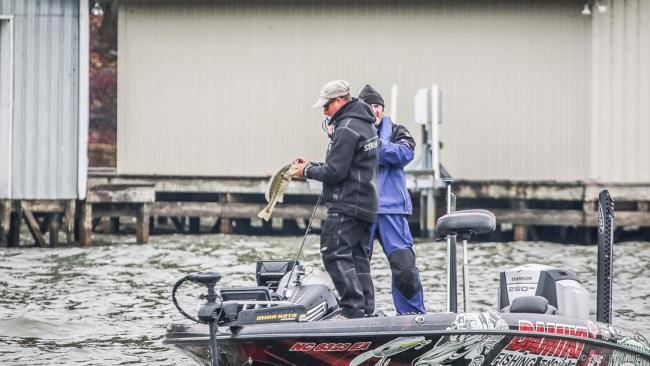 The umbrella rig and tail-spinner are Thrift’s preferred wintertime lures, but he’ll usually have a jig rigged up and ready too. Being a Damiki guy, Thrift likes the 1/2-ounce Mamba Jig with a Damiki Knock Out as a trailer.

“Fishing the jig is more structure- and cover-related,” Thrift explains. “I throw it where there’s not really a lot of schooling fish, but more around docks, rocks or brush where I’m looking for one big kicker fish. I fish more isolated targets, and it doesn’t really matter if bait is there or not. I’m just targeting a place where a big fish might be in the wintertime.”