Plenty of shuffling to be had on the leaderboard 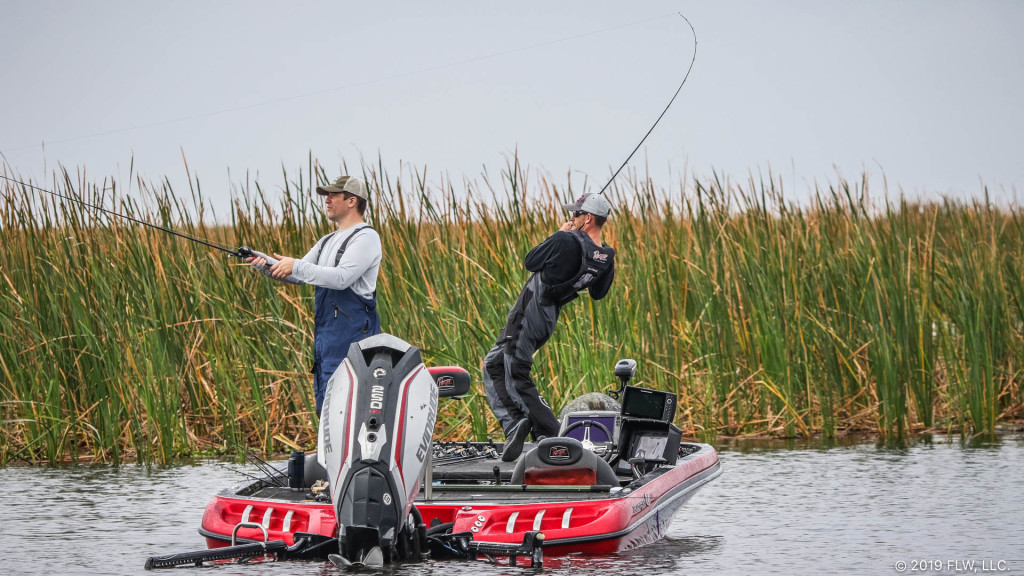 Every ounce counts in a tournament, and that will certainly ring true today. The second day of Costa FLW Series competiton on Lake Okeechobee presented by Power-Pole may be off to a better start, but big bites are still few and far between.

The forecast for today called for highs in the upper 70s and sun. It’s definitely warmer than yesterday, but instead of being greeted by sun this morning the field got clouds and small rain showers. As soon as our coverage team got back to the dock the sun broke through, and it looks as though it’ll stay that way for a while. Good news for those with later boat draws since the bite got better as the day went on yesterday and the same should happen today.

The water temperature increased a degree or two from yesterday and was around 63 to 64 by midday, which probably explains why there was more action seen today. Granted, 1- and 2-pound fish aren’t anything to write home about, but where they live, so do the big girls.

We caught up with leader Troy Roder late this morning and watched him fish for some time with no luck. Roder was fishing a lock with some company from other pros. He pulled up the trolling motor and ripped toward the lake around 10:30, and we never caught back up with him. Word on the street was that he had one in the box.

Of course, Bryan Thrift had a limit up north. He said it was worth about 7 pounds. His travel buddy Bryan New also had a limit for close to 9 or 10 pounds down south.

Many of the other pros are focusing on canals and moving quite a bit. Because of that we didn’t connect with many of the other top pros, though from what we saw pressure is starting to take its toll across the board.

It’s the final hours for pros to catch every ounce they can to try to make the top-10 cut to fish tomorrow. With weights as tight as they are, one or two good bites can be the difference between fishing on Saturday or heading home. Weigh-in starts at 3 p.m. ET, so check back and see how it unfolds.