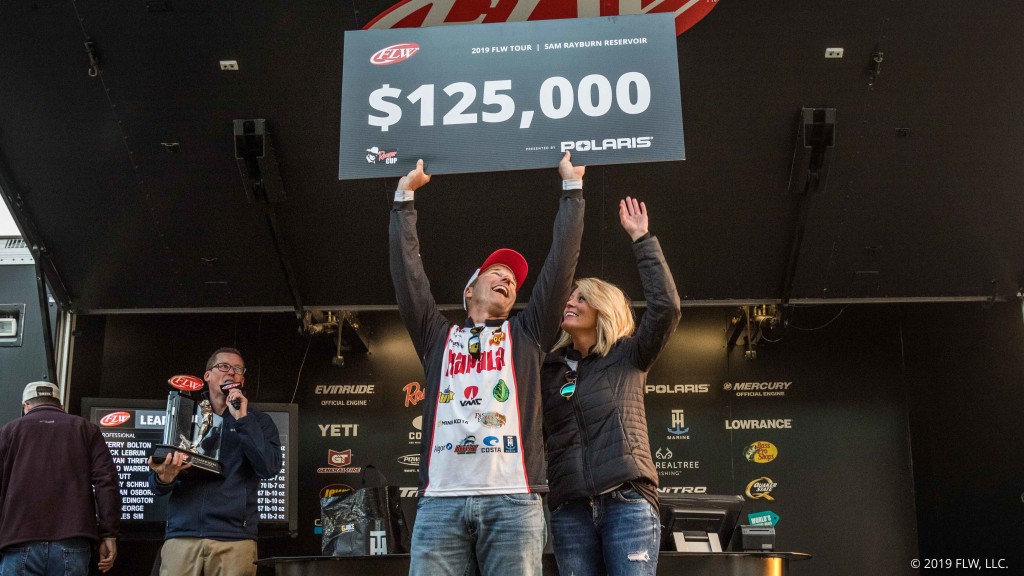 So far in the 2019 FLW Tour season, Terry Bolton is charting a course that goes against the current trend of professional bass fishing.

In an era when a pro’s prime seems to be getting younger and younger, and pro-ready anglers are blossoming as early as college or high school, Bolton, at age 49 and in his 24th season on the FLW Tour, is enjoying his best start yet. He’s currently leading the Angler of the Year race through three tournaments and opened the season at Sam Rayburn with his first-ever FLW Tour victory.

While his contemporaries are retiring or moving on to other professional leagues, Bolton is hitting his stride on the FLW Tour. But it almost didn’t happen. Bolton was considering retiring after 2018. He says fishing had lost its fun, and his life’s work had become more of an obligation than a passion.

Thankfully, he stuck it out.

This year, Bolton says he’s fishing up to his abilities, and not by chance. He’s rediscovered the fun and is tackling life on and off the water with a “different perspective.”

If you’re wondering whether Bolton has found a secret elixir for success, or a fountain of youth, or a newfound source of energy to propel this surge in his career, be assured he absolutely has.

Her name is Dacy. 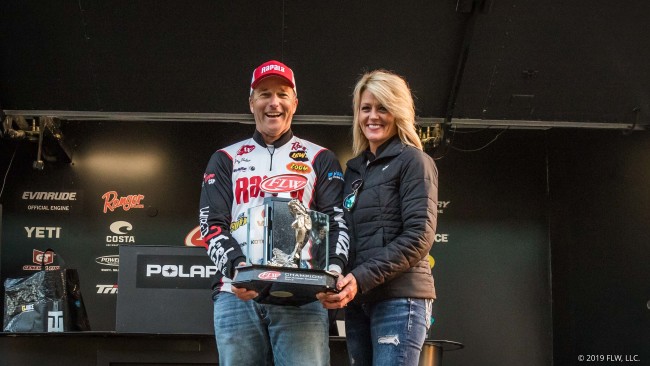 In some ways, Bolton’s life has paralleled his career up to a point. On the water, here was this journeyman pro who’d enjoyed a long career, averaging finishes in the top 25 percent of the AOY standings, but without that punctuating win or point title to define his tenure. Off the water, Bolton was missing something too.

He’s found both recently. Bolton won the 2019 season opener, but before that, in the fall of 2018, he married Dacy.

Now, life and fishing are trending up for the Boltons.

“We kind of met each other through a friend of ours, and she called me one day and wanted to go fishing,” Terry explains. “We kind of went out and went fishing. And we started a relationship from there. She likes to fish. She is getting into it a little more, but she grew up fishing with her grandmother. She bass fished some, but she enjoys fishing for anything.”

Terry says the tournament side of fishing is new to Dacy. The couple fished its first co-ed event together last year, and Terry finds some humor in his new role.

“We’re going to try to get in one or two more this year,” he says. “She’s very competitive. That’s the only downside to it. She wants to catch every one of them, so I have to try and keep her grounded a little bit.”

While the Boltons were planning their nuptial last year, Terry was still debating whether or not to fish in 2019. He’d already taken a full-time gig as a safety consultant with HealthWorks Safety in Paducah, Ky. It’s the first real job the pro has had outside of fishing, and it put to use a college degree that had mostly been an insurance policy all these years. He saw it as a logical next step in his life that could sustain him after fishing.

Luckily, he didn’t have to choose right away. HealthWorks allows Terry to take time off to fish when needed. Still, juggling two careers at once is never easy, and it was a lot for Terry to shoulder.

There was also his relationship with Dacy. Terry didn’t want to eschew any of the boyfriend responsibilities, especially when the two were preparing to be married.

“I think last year, by taking on the safety consulting job and trying to fish and dating and preparing to marry my now wife, I had a whole lot of irons in the fire in 2018,” Terry admits. “It was a lot to deal with. I joked about it; I said sometimes I feel like I’m not much of a professional fisherman, a safety consultant or a husband because I’m sort of torn between so many roles.”

Fishing fans owe Dacy a big thank you. She helped convince Terry not to give up just yet. But, more importantly, she helped him refocus on why fishing is important, which has translated into an exciting season thus far.

“My wife has been a very good influence on me,” Terry says. “She said, ‘This could possibly be your last year, so you’re going to go out there and have fun.’ I think life sometimes becomes busy. You don’t seem to have the time for everything. I think this year, for some reason, maybe it’s age, but I’ve been able to enjoy the fishing side – something I’ve been able to do now for 24 years – and how lucky I’ve been. I’ve always said there were times in my career I haven’t fished up to my ability. This year I feel like I have so far.”

Together, the Boltons are a strong team. They’re also still very busy as they navigate life together. Dacy recently finished cosmetology school, and Terry is finding balance between his careers on and off the water. It’s a new chapter of life for both of them.

“I haven’t had as much free time as I used to have, so I don’t get to go fishing as often during the week,” Terry adds. “Now when I go fishing, I’m ready to go fishing. I’m really looking forward to it. It’s fun.”

What’s more fun is that Dacy also travels with Terry to tournaments.

“That’s something I never had is that kind of support,” he says, “and that’s been huge – her support, and kind of pushing me to do better.” 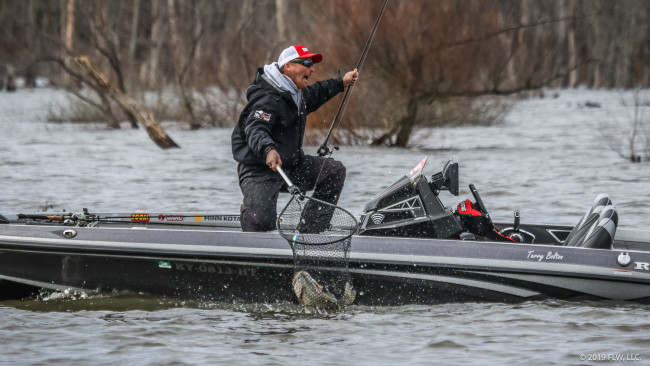 Friendly, witty, without the ego you might expect from someone who’s won $1.26 million in a bass boat, Bolton is certainly one of those anglers whom everyone likes. That’s why so many were pulling for him to finish strong at Sam Rayburn and finally get the win, and why so many fans are probably rooting for him to stay in AOY contention as the Tour progresses into the second half.

There’s still a long way to go in the AOY race, but Bolton doesn’t seem to be rattled by the pressure. But then, he’s never been one to get worked up. The fishing universe probably saw more emotion out of him in one weekend at Sam Rayburn this season than they’ve seen from him in a long career on the water.

That’s not a dig. Bolton is as levelheaded as they come. It’s one of his greatest strengths as a tournament angler. You won’t see him breaking rods when he loses a fish or rubbing bump rails to crowd a community hole. That “it’s just fishing” attitude and his ability to stay cool have benefitted him in stressful situations on the water over the years.

Bolton does admit that, maybe, had he been a little more aggressive and not “laid up” as often in tournaments, he might have won sooner, but he recognizes that his best success has always come by not pushing too hard.

“It used to be I would make a cut and think, ‘I’m X amount of pounds out of this, so I need to go throw a jig and try to catch big ones,’” he says. “And I’d do that and catch one or two fish and go from 10th to 20th or fourth to 10th. Now I’ve learned if you just keep fishing and keep your head about you and get bites you’ll do a lot better.”

Such is his strategy this season. Bolton hasn’t really managed to dial in anything during practice. In veteran fashion, he’s let it all evolve on the water.

There have been some big moments, too: uncovering the motherlode on his winning spot in Texas, a last-hour catch at Toho that saved his tournament, a smart move to stick to his guns and re-visit water that it turned out was replenishing at Seminole. The results were finishes of first, 19th and fourth, and the AOY lead going into stop No. 4.

“I’ve been very fortunate. The good Lord has blessed me with some good bites. A lot of it has been keeping a level head,” Bolton says. “That’s the key to the AOY race. Things aren’t always going to go your way. You have to keep a level head, and I’ve done a really good job of that this year.

“A lot of fishing is mental, being able to control your emotions and not get too spun out when things aren’t going your way, and I’m in a good mental state right now. It’s really kind of fun. I’ve kind of relaxed and fished better.”

Going into this week’s contest at Grand Lake, Bolton holds the AOY lead with 579 points and an 11-point cushion over 2015 AOY Scott Martin. Early practice reports at Grand indicate a tough bite. Bolton’s experience and poise ought to be helpful for dealing with the grind.

After Grand is Cherokee in April. Bolton’s never fished there, but he likes tackling new lakes or lakes he hasn’t been to in years. Then, in May, the Tour moves to Chickamauga, which should be a good fit for a guy who grew up in the Tennessee Valley. The season finishes at Lake Champlain, and that could be a real test, especially if Martin is still in the race. The Florida pro has won three Tour events at Champlain.

Champlain is certainly a question mark for Bolton, but looking that far ahead in March is putting the catch ahead of the cast. For now, he says he’s not changing anything with his approach. He’s going to throw the things he likes to throw and hope they bite.

“The goal is to be in contention in the last tournament. I’ve had a great start to the year; probably one of the best ever. A lot of that can be attributed to being happily married now,” he says. “I have a very supporting wife. There’s a lot to be said for that. I’m less worried about the Angler of the Year race and just looking forward to the Angler of the Year race. 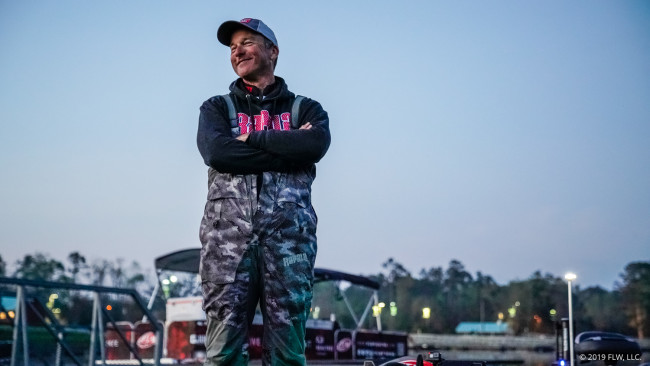 Bolton fished one FLW Tour event during the inaugural season in 1996 and has been a mainstay on Tour ever since.

His career has been marked with consistency: 13 FLW Cup appearances, $1.26 million in earnings, 48 career top 10s in 281 events fished across all FLW circuits since 1995 and a stable of supportive sponsors backing him along the way. While Bolton has remained steady, a lot of change has swirled around him in two decades of fishing. For starters, many of Bolton’s original sidekicks on Tour are gone. Some left the FLW Tour in recent years to fish other professional circuits, but many members of the old guard have retired for good or stepped away to pursue other opportunities.

“The vast majority of the guys that I started with are all gone now,” Bolton says. “There’s not a whole lot of us around anymore. It’s a lot of younger faces, and we have a very good young crop of anglers this year coming up through the ranks. But that’s really good to see. A lot of these anglers now are so much better than I was when I started at their age.”

Youth brings enthusiasm, which is a valuable asset to a touring pro, but so is experience. Bolton seems to have tapped into both this season. And with Dacy by his side, whether or not Terry wins AOY seems less consequential to his happiness, though it’d certainly be a stellar way to cap things off for when retirement eventually does come.

Just don’t expect him to hang it up too soon. Terry says he’s changed his answer to the question, “Are you still thinking about retiring?”