Day three is underway for the top 30 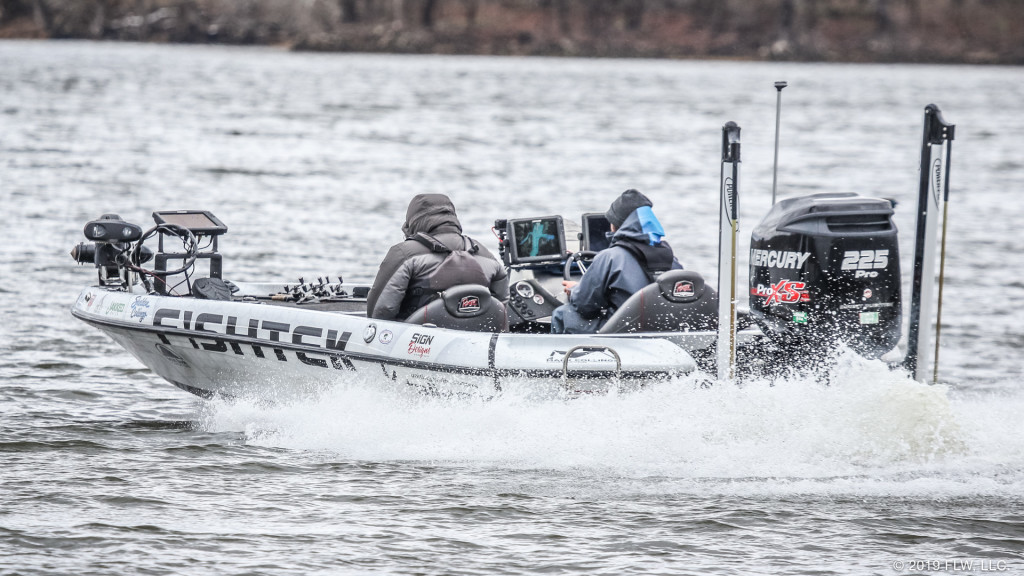 B. Lat got keeper No. 2 – a 3-pounder that looks super chunky. Jeremy Lawyer recently hit a flurry and caught three nice keepers. Lastly, we’ve been getting mixed reports on what Bryan Thrift actually has in his livewell, so don’t be shocked if he has a little more than expected.

Along with FLW Live, we are going to shut down the blog and FLW Live Leaderboard for the day. “Stingy” would be a fitting word to sum up the fishing on Grand Lake today. Still, the recent influx of fish catches is pointing toward some potential late-day heroics. Make sure to watch the live weigh-in to see who makes the top 10 and goes fishing on championship Sunday.

Thrift widened the gap on his lead after making a couple culls. His marshal is reporting that Thrift has about 15 pounds in the boat. If Thrift keeps his 6-pound lead he will be super tough to chase down tomorrow.

Anyone not named Bryan Thrift has seemed to hit a major lull in the action on Grand. Any fish catches from here on out are going to be clutch as the bites are far and few between. The sun has finally broken through in a lot of the areas of the lake, but it’s not helping the bite. A lot of the anglers will need to take into account how much time their run back to weigh-in will take too, as the wind is blowing relentlessly.

Bryan Thrift has vaulted himself into the lead after filling out his limit. Thrift’s last few fish have come on a combination of moving baits and jigs up in Honey Creek. Thrift’s marshal reported the limit to be about 11 pounds, but Thrift could easily be sandbagging some – scary for anyone chasing him on the leaderboard.

Bradford Beavers is still sticking to his stump pattern. He took some time to do a little side-imaging and found a new stump. After casting at it and hooking up, the fish popped off. At least he knows there are still fish in the area. 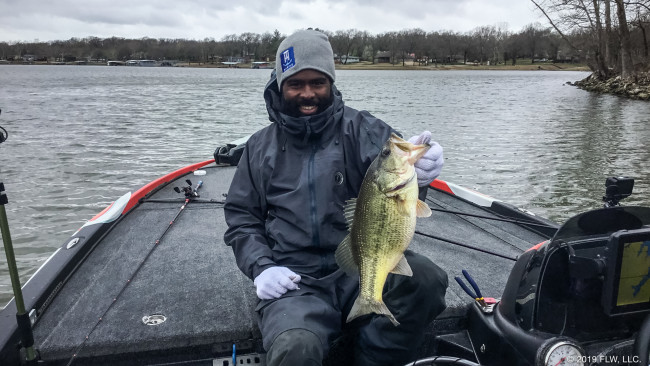 Brian Latimer was able to put his first fish in the boat. He’s been juggling between a spinnerbait and a crankbait all morning. His starting spot definitely didn’t pan out like he hoped, but a 4-pounder should help boost his morale for the second half of the day. 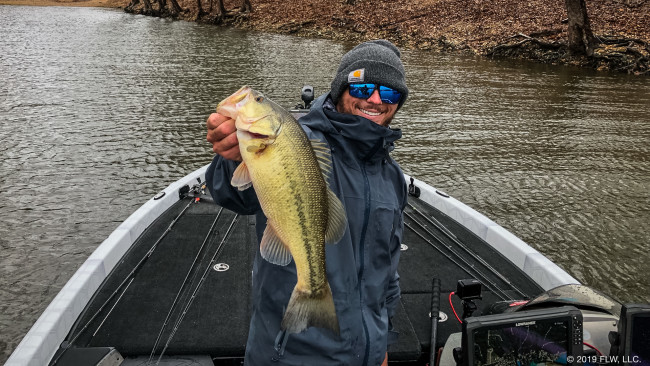 Jon Canada was able to get a limit worth about 10 pounds. He reported that he has caught about a dozen fish today, but just five being 14 inches or longer. Sheldon Collings also got his fifth fish in the box. Unofficially, we have Collings in third place. With his history on this lake there's no reason to believe he couldn’t still win the whole tournament. 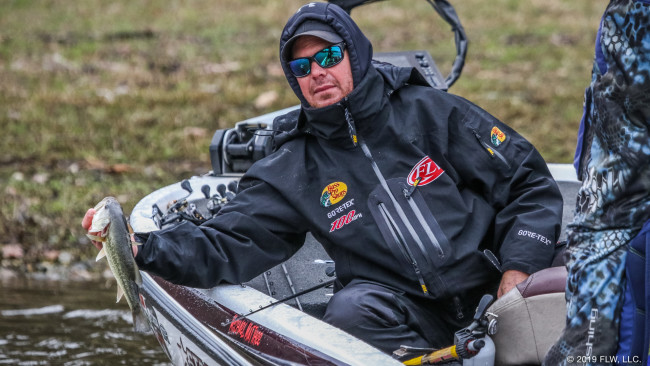 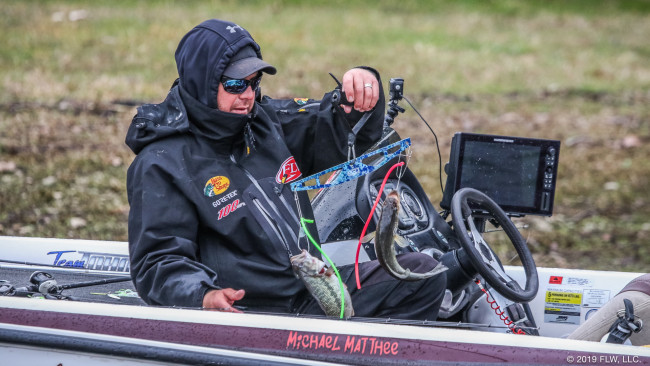 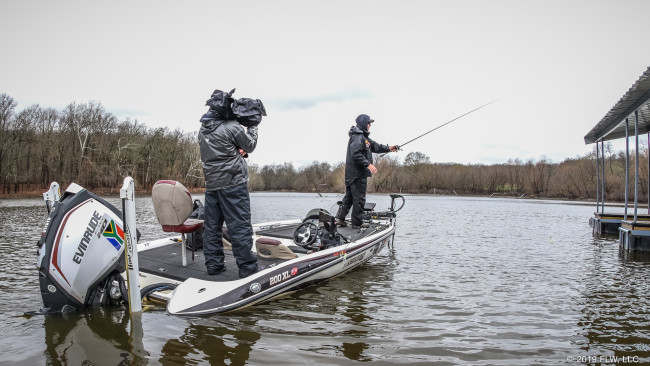 Michael Matthee is staying steady with his spinnerbait pattern. He says the area he is fishing has been warming up faster than other parts of the lake. Matthee also mentioned that the fish are changing spots within his area as the weather changes and all he needs to do is stay on top of them.

It’s pretty much inevitable that we can’t go an entire day without mentioning Bryan Thrift. It sounds like he is starting to figure them out as his marshal reports the North Carolina pro having three bass in the boat for a total of 7 pounds, 8 ounces. That’s good enough to have Thrift unofficially in second place behind Cox.

Boutries is still grinding it out in Wolf Creek looking for his first bite. Not making the run to the dam is really taking its toll on the rookie. Still, it’s better to be safe than sorry. A few keepers should have him fishing on championship Sunday.

Right after catching a small keeper, Sheldon Collings struck gold with a 5 1/2-pounder. He was fishing the back of a boat dock with a white ChatterBait. A few more good bites for him and we may see Sheldon crack another top 10 and go fishing on day four.

We are definitely seeing a vibrating jig pattern develop on Grand Lake today. Maybe the fish are just tired of seeing spinnerbaits all week and just needed a different kind of shiny bait to get them going. 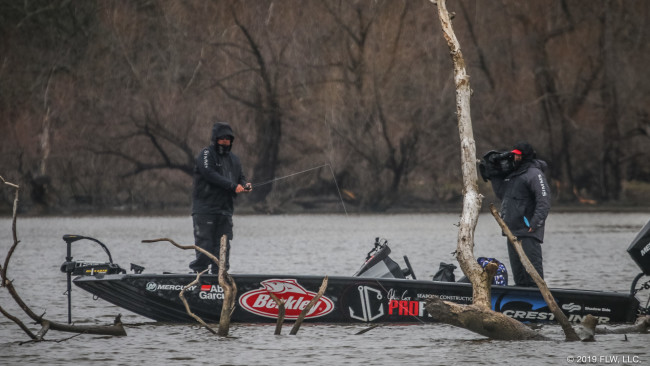 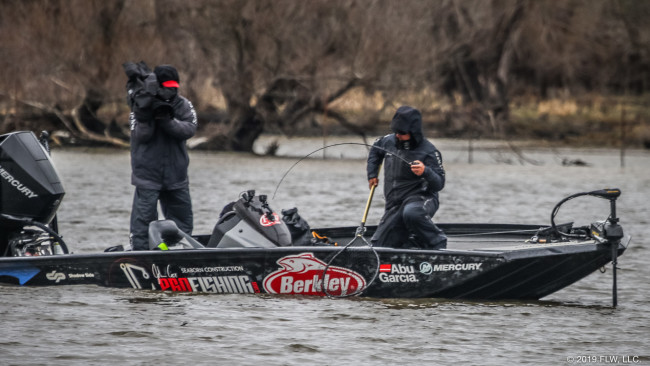 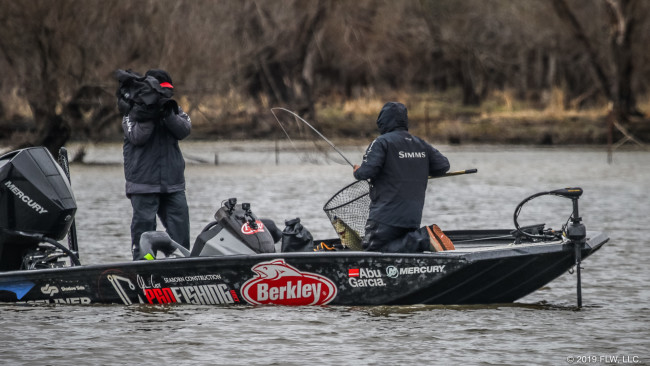 After making a bunch of casts at the same laydown and changing baits, John Cox smacked a 4-plus-pounder on a dark-colored ChatterBait. The area he is fishing has super dark and stained water; so dark that John could hardly see his fish in his livewell after dumping them in there. Cox has only had three bites today, but that 4-pounder has to feel good for the Florida pro.

Nothing else too noteworthy has happened in the last half-hour other than a few small keepers. We’re working to get a FLW Live camera on Michael Matthee, so we should see him soon.

Alabama pro Jamie Horton finally wrangled in his second fish of the day. Right after moving spots Jamie landed the 2-pounder on a white ChatterBait. Now, Horton is back in the unofficial lead.

John Cox has moved way up Duck creek in some super skinny water. Our fiberglass camera boats are actually having a tough time following him up there. Cox said it is so cold right now that he can hardly feel his hands. 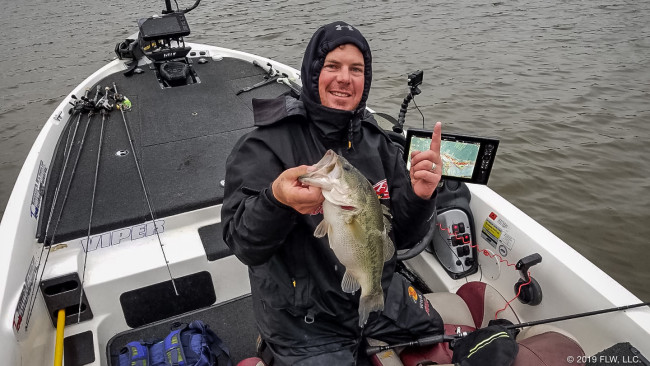 The South African is doing work on Grand Lake. Matthee just filled out the first limit of the day after catching a 2-pounder. It’s nice to see Michael get on some fish after a slow start to his rookie year on the FLW Tour. 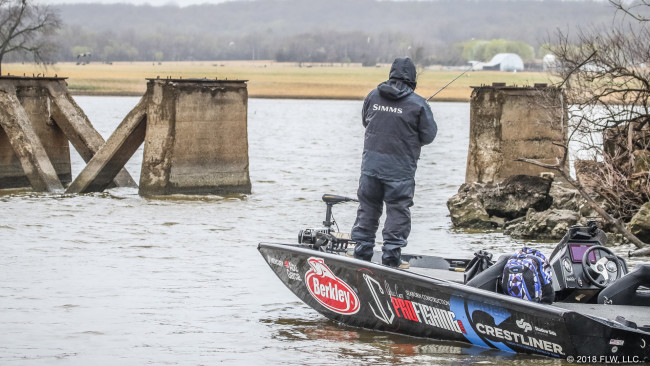 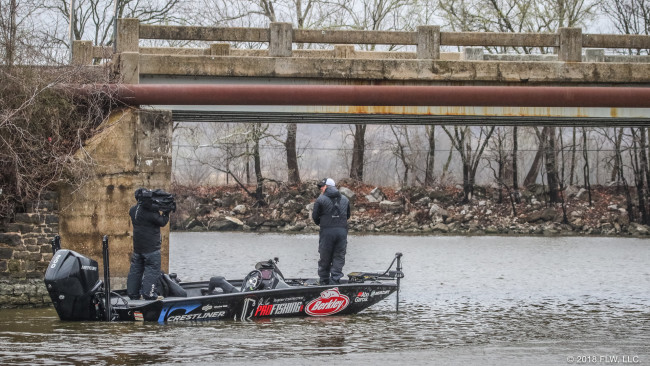 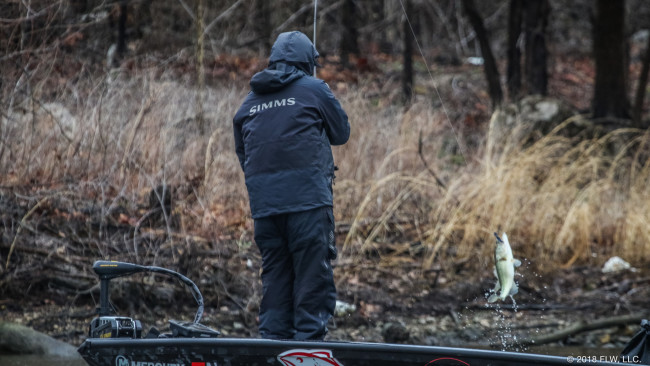 Oklahoma pro Bradley Hallman got fish No. 1 in the boat, a 4-pounder. Like so many other pros this weekend, Hallman is beating the bank with a spinnerbait. Perhaps he has more local knowledge to lean on when targeting specific spots on the bank.

Yesterday, when it was raining the fish were seriously chewing. This morning’s rain has stopped and shouldn't come back at all today. Still, the wind is pretty wicked out there, so the spinnerbait bite ought to remain strong. Sheldon Collings’ marshal just reported that a lady randomly came down on a dock to give the two breakfast burritos. The kind lady also mentioned that the two were brave for being on the lake this morning. Just one of the many perks of being an FLW marshal …

John Cox has one small fish in the boat that’s good enough to have him in the lead. He truly doesn’t seem ultra-confident in his pattern and really doesn’t know what his fish are doing. Knowing John, his ability to “wing it” should put a quality limit in the boat by the end of the day. 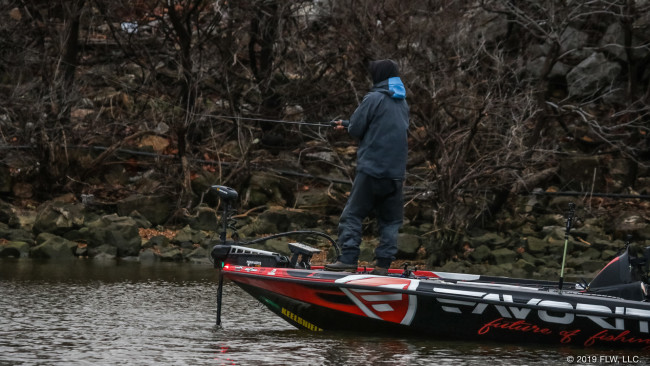 Michael Matthee is staying hot this morning. He has four fish in the boat for 7 pounds and now finds himself in fourth place, unofficially. He is chucking a spinnerbait near boat docks. Other than Matthee, it seems pretty slow across the board. B. Lat hasn’t found a keeper yet. He has been doing his damage in Horse Creek but has some local traffic to compete with today. 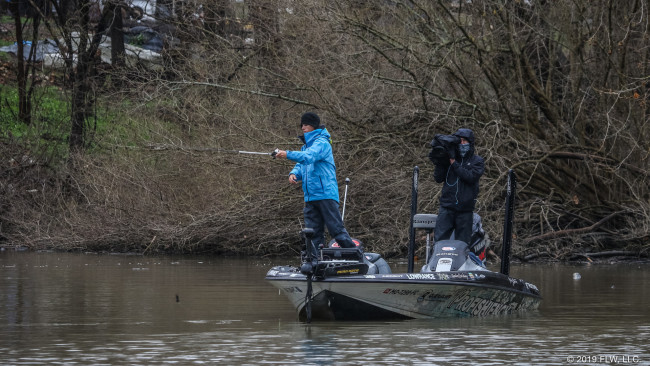 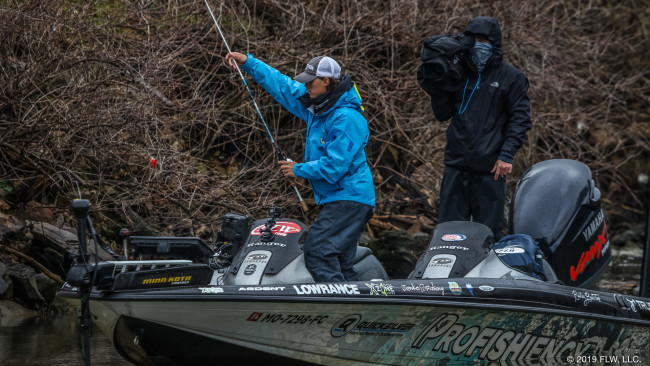 Bailey Boutries is not off to the start the young pro was hoping for. His plan was to head way south to hit his juice, but the waves and wind had other ideas. After spearing a wave, Boutries decided to bail on his plan of running south and is now fishing up in Wolf Creek. He also may have done a little damage to his trolling motor in the whole fiasco. The good news is he is staying positive and says there are fish to be caught up in Wolf Creek. 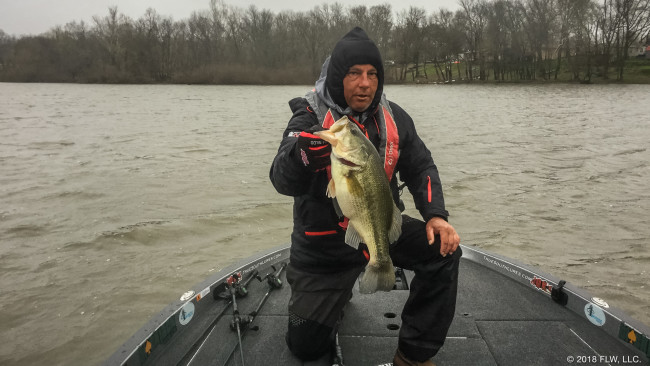 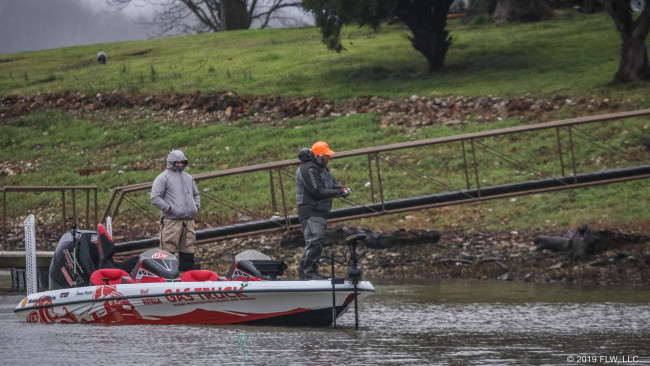 South African pro Michael Matthee, Sheldon Collings and Ron Farrow have all bagged 3-pounders already. That should give them all a solid confidence boost for the rest of the day.

Miles Burghoff has two fish worth five pounds in the boat. It looks like he is either fishing single docks or near a bunch of boat slips.

Despite breaking down at takeoff and getting a new boat, Jamie Horton was able to draw first blood on day three. He was slow-rolling a spinnerbait on the bank to catch a 3 1/2-pounder.

Bradford Beavers has been working the same piece of brush the entire morning. After making a whole bunch of casts with his shaky head Beavers was able to get a small keeper, which has him in the unofficial lead. 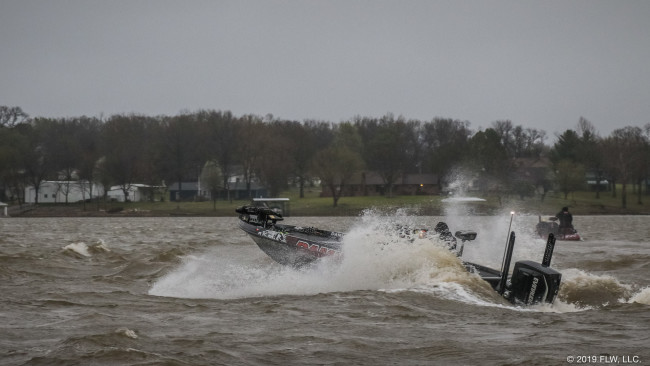 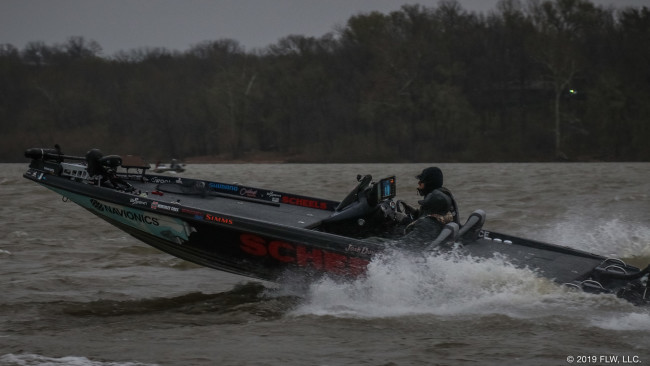 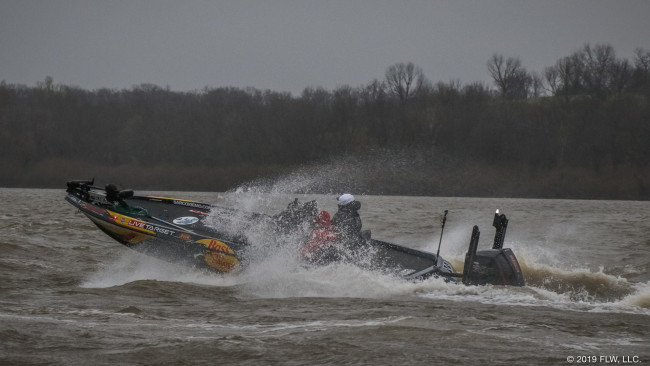 The top 30 pros got started a few minutes after 7:45 and are making their way to their first spots. Most are taking it pretty slow, and the guys fishing the lower end are just now starting to arrive. It's chilly and wet on Grand Lake, so nothing will come easy today, but there will certainly be plenty of excitement to witness on FLW Live. You can follow along there, or in this blog or on the FLW Live Leaderboard. 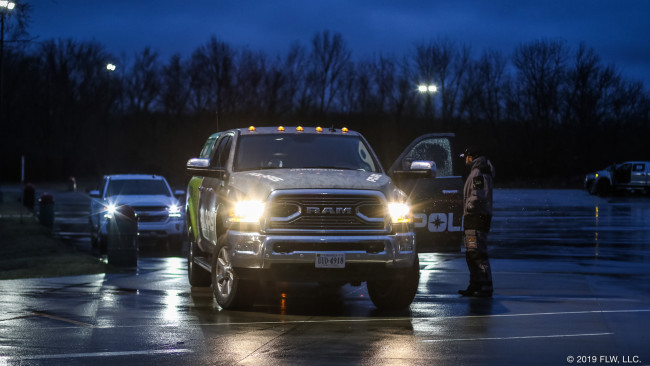 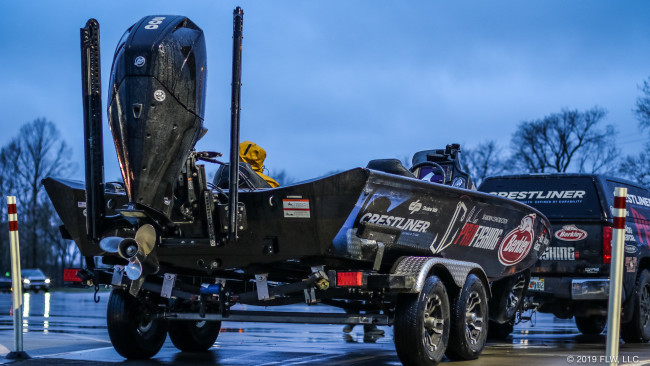 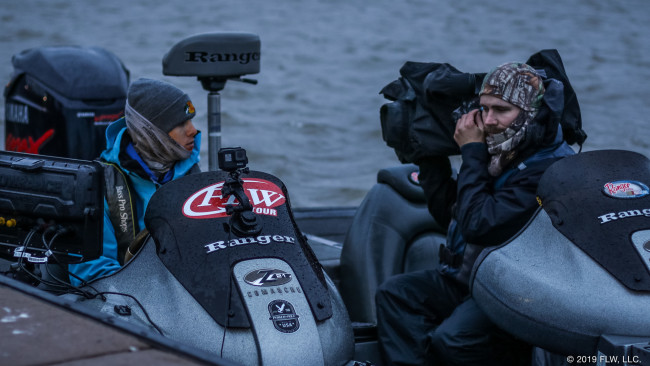 Sideways rain and cold forced a brief delay of takeoff this morning, but the pros will be headed out at around 7:45. It also doesn't look like pros are going to get a heck of a lot of relief from Mother Nature the next two days. More cold, more north wind and more miserable conditions are in the forecast. Luckily, windy, rainy weather usually makes bass bite in this part of the country, especially when fishing with reaction baits, and this crop of professional fishermen is experienced at catching bass in any conditions.

Bailey Boutries will lead the crew out this morning after a stellar 20-6 bag yesterday to take the lead. He has a pattern that's working and is excited to put it in play again today. The top 30 pros are competing to make the top-10 cut and go fishing again on Sunday. Stay tuned for more details once the field makes it on the water, and watch FLW Live starting at 8 a.m. CT