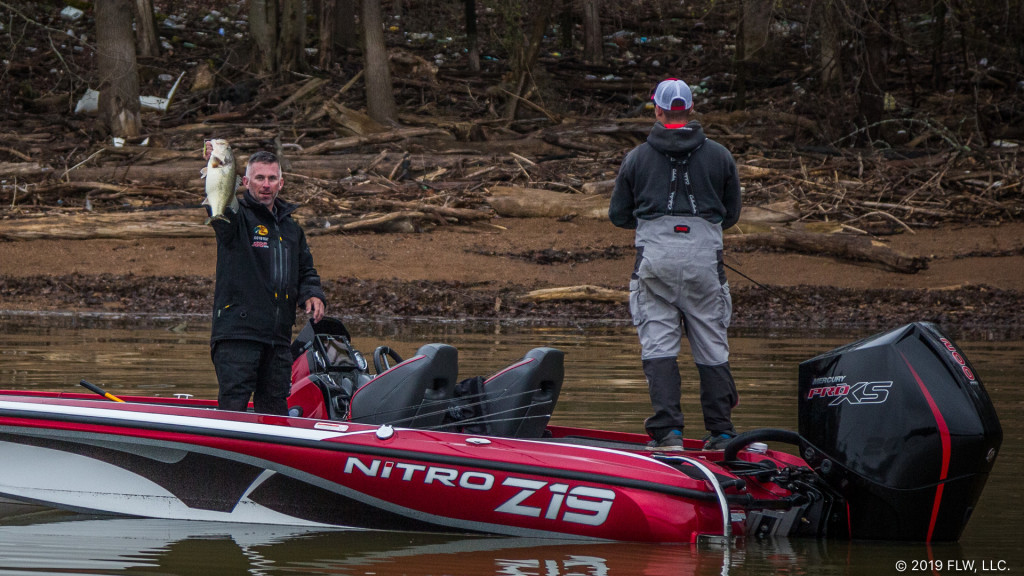 Day two of the Costa FLW Series Central Division event presented by Lowrance on Kentucky Lake has seen more cloudy skies and a slight rise in temperature. However, the lack of wind presents enough of a difference to fiddle with the power-fishing patterns that produced on day one.

After weighing 24 pounds, 10 ounces on day one, pro leader Jake Morris carried a lead of 4-9 into today’s competition. He might end up cherishing that big opening round, as the second morning was not as generous.

Mostly throwing a spinnerbait, he boated a 5-pounder early, but a lost fish hurt him, and a lack of bites suggests his go-to area might be drying up.

Second-place pro Jimmy Washam and third-place pro Ramie Colson Jr. also spent a lot of time behind spinnerbaits. They, along with Morris, were targeting prespawn staging areas. Washam had three keepers at around 11 a.m., while Colson didn’t catch any in the first hour when we watched him.

We caught up with fourth-place pro Cole Floyd mid-morning and found him with three fish – a 5-pounder and two modest keepers. Floyd says he should have been sitting on a decent limit, but losing two fish – one an estimated 4-pounder – limited his progress.

Floyd has been working gravel banks with scattered wood, but he noted that, unlike the rapid power-fishing tactics employed by several others in his area, he’s taking his time, dragging plastics and paying extra attention to any isolated wood he encounters.

Steven Hatala, who caught the day one big fish – an 8-11 – early on yesterday, returned to the same creek mouth flat today, but found the lack of wind crushing his reaction bite. He eventually scrapped that deal and transitioned to running gravel banks. Hatala missed a big opportunity when he found himself out of position to handle a sizable bass that bit close to the boat.

Sheldon Rogge caught his first keeper at 10 a.m., whereas day one found him with three keepers by 9:30. He, too, lamented the lack of wind.

The most interesting story of the morning was Dakota Ebare’s obviously prudent decision to stake out the riprap break walls of Paris Landing. Figuring that the warming conditions would spur fish toward such structure, he diligently slung an umbrella rig and enjoyed a red-hot morning flurry that produced a 6-pounder, a 4-pounder and a pair of 2 1/2-pounders on four consecutive casts.

Although the sun made a valiant attempt to punch through the gray skies around 11 a.m., it looks like partly cloudy conditions will remain. It will be interesting to see if the warm-up generates an afternoon rally.