Moving baits on staging areas is the dominant pattern 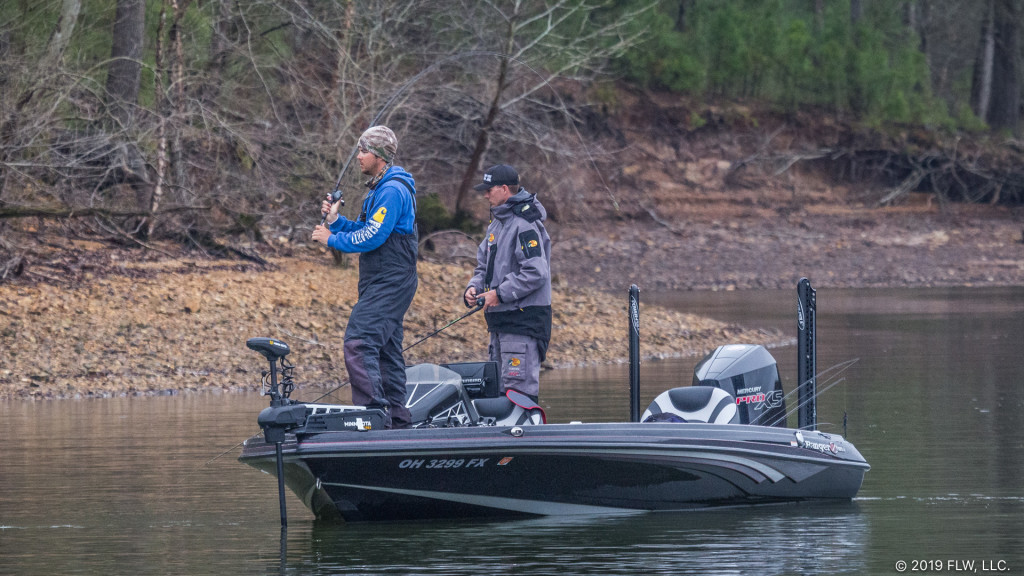 Jake Morris had a much tougher time today than his pace-setting performance on day one, but the McKee, Ky., angler expanded his substantial lead in the Costa FLW Series Central Division event presented by Lowrance on Kentucky Lake with a two-day total of 38 pounds, 6 ounces.

Targeting prespawners in areas mixed with rock and wood, Morris caught his fish on a spinnerbait. 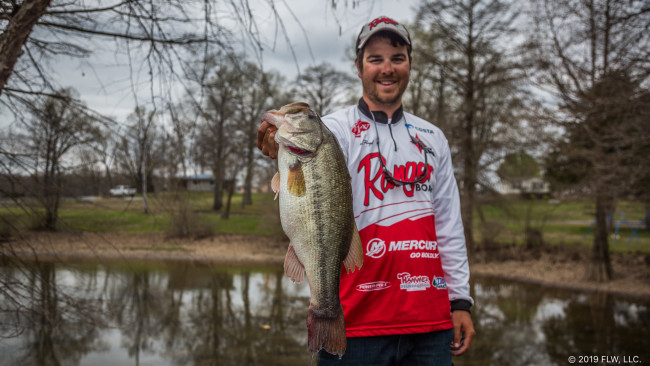 Despite a frustrating day that saw him lose a big fish, miss a couple of key opportunities and end up one fish shy of a limit, Cole Floyd was able to improve his position from fourth place to second. Adding a day-two catch of 13-5 to his first-round weight of 17-11 gave him a total of 31 pounds.

Floyd did all of his work within prominent creeks. He fished mostly gravel banks with scattered wood.

“I knew the river was going to be extremely tough because we’ve had a lot of warm days and the fish are moving up,” he says. “What hurt the river the most is there’s no current and it’s gin-clear. The wind would really have to blow to get a couple of bites out there.

“I practiced a lot fishing bars and stuff like that and never could get bit. So I just got into an area with some bait and a few fish and just kept my head down. I focused on points and anything with some water on it. If you can be way back in a creek with 4 feet of water, and if you’re throwing up into 2 feet, that can make a difference. If you can find any wood, you can get bit.”

Floyd caught his fish dragging plastics, and a slow retrieve was key.

“Everyone’s winding, but the day was flat calm with no wind, and it’s hard to catch them when it’s like that,” he says. “Yesterday, when we had some wind, you could catch them on moving baits. Today, you had to take your time and work areas where you knew there were some fish – and capitalize when you got a bite.”

Contending with more boat pressure than he faced on day one took its toll on Jimmy Washam, who has tallied 30-11 and, today, yielded one spot from second to third. After catching a day-one limit that went 20-1, the Tennessee angler managed only three for 10-10 on day two.

“The boat pressure didn’t help, and we didn’t have wind, so the way I had been getting those fish to eat moving baits, they slowed down on that,” Washam says. “Also, the fish I’m catching are healthy fish that are right on the verge of spawning. Today, I had a 5-pounder follow a spinnerbait all the way to the boat, and she looked miserable because she was so swollen with eggs.”

Washam says he caught his three keepers on a 1/2-ounce spinnerbait with a translucent skirt, a chartreuse trailer and tandem gold willow-leaf blades – a No. 3 and a No. 4. 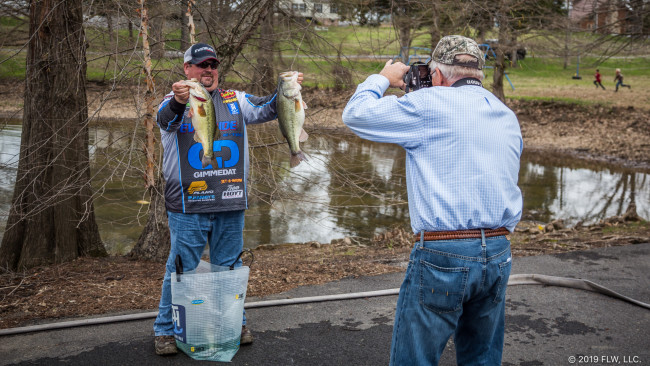 Veteran pro Dan Morehead decided to play the percentages, and it paid off with a two-day total of 26-1 that earned him a final-round berth in the No. 4 spot. After catching three fish for 10-6 on day one, the Kentucky pro added four more today for 15-11 and rose 18 notches from 22nd.

“I’m fishing Barkley Lake, and that’s just the way it is. I’m not getting very many bites, but when I get one it’s big,” Morehead says.

Patience has been essential, as Morehead has had to grind through several unproductive hours before getting down to business.

After a busy day one delivered 27 fish with five keepers for 15-14, Brad Cook managed only two keepers today for 8-10. His two-day total of 24-8 moved him up a notch to fifth.

“Today, the fish were bigger, but I lost a good one and had several just miss the bait,” Cook says. “There were a few other boats around me, along with some high school and college kids [practicing for an upcoming event]. The pressure is getting to them a little bit.”

Cook says he’s looking for big female bass that are sliding farther back in their spawning migration. Flat, lead-in banks were his main targets. He caught his fish on a mix of reaction baits and flipping presentations.