Lawyer Loads Up on Cover Cash at Grand Lake 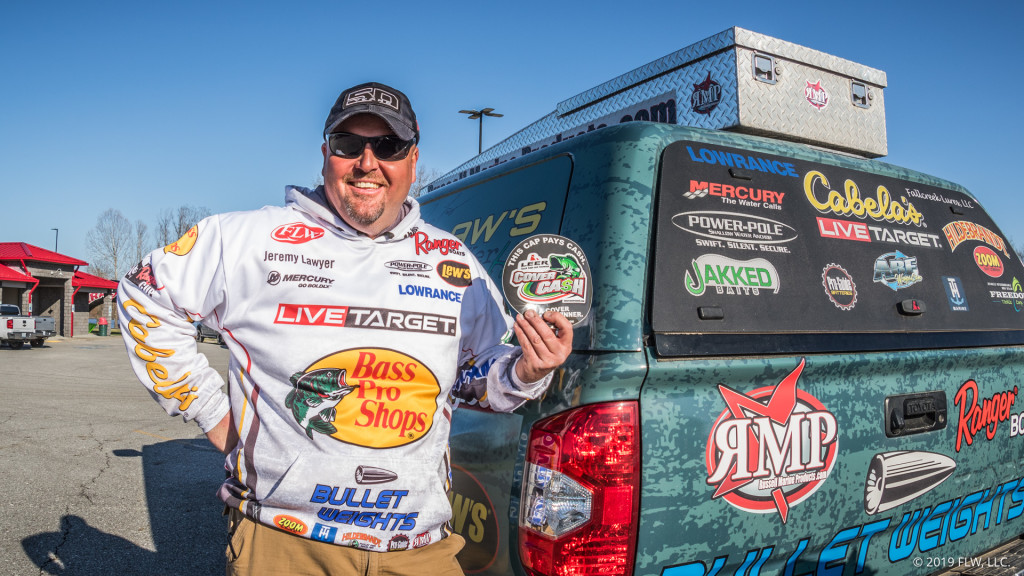 While Jeremy Lawyer earned his first FLW Tour win at Grand Lake a couple weeks ago, the friendly pro from Sarcoxie, Mo., is no stranger to hoisting a first-place trophy. In the last three years, Lawyer has added T-H Marine BFL All-American (2016) and Costa FLW Series (2018) wins to his impressive list of accolades.

Lawyer has also become well acquainted with earning bonus money through contingency programs like LEER Cover Cash and Toyota Bonus Bucks. In fact, he just pocketed another $500 from LEER and $2,000 from Toyota for his finish on Grand Lake. These two programs, among others, have been especially kind to Lawyer throughout his career.

“I’ve owned several Toyota Tundras, and, gosh, I’d guess at least five LEER truck caps or tonneau covers in my career,” Lawyer says. “Both companies make great products, support the fishing industry and have awesome rewards programs for us anglers. To me, it’s really a no-brainer when it comes time to purchase a new truck or truck bed cover.”

You don’t need to be a Tour-level pro to take advantage of these programs, and you don’t even need to finish in first place like Lawyer to earn extra cash. You simply have to be the highest-placing registered participant in either LEER Cover Cash or Toyota Bonus Bucks. The programs are available for myriad tournaments, including the FLW Tour, T-H Marine BFL, several team tournament trails and a whole host of others. To learn more, or to register, visit leercovercash.com or toyotatrucksbonusbucks.com.

Grand Lake proved to be a fickle playing field for most anglers throughout the week, but Lawyer employed a few different 3/4- and 1-ounce spinnerbaits to catch 62 pounds, 12 ounces over the course of four days. Lawyer was quick to admit this win was particularly special because of the close proximity to his home, and because his family was there to enjoy it with him.

“It was just a blessed deal. That’s for sure,” Lawyer says. “To be able to win that close to home, and have lots of family in the crowd on that final day, was just incredible. I even had a couple family members and close friends watching me on the water throughout Sunday. You know, it just doesn’t get a whole lot better to me.”

The third-year FLW Tour pro relied on his nuanced knowledge of spinnerbaits and familiarity of the fishery to claim the top prize by the narrowest of margins on Grand Lake. Lawyer and South African angler Michael Matthee had the exact same cumulative weight after four days of competition, but ultimately Lawyer was crowned the champion via tiebreaker.

Lawyer is looking to keep the momentum rolling this week for stop No. 5 of the FLW Tour season on Lake Cherokee in east Tennessee.