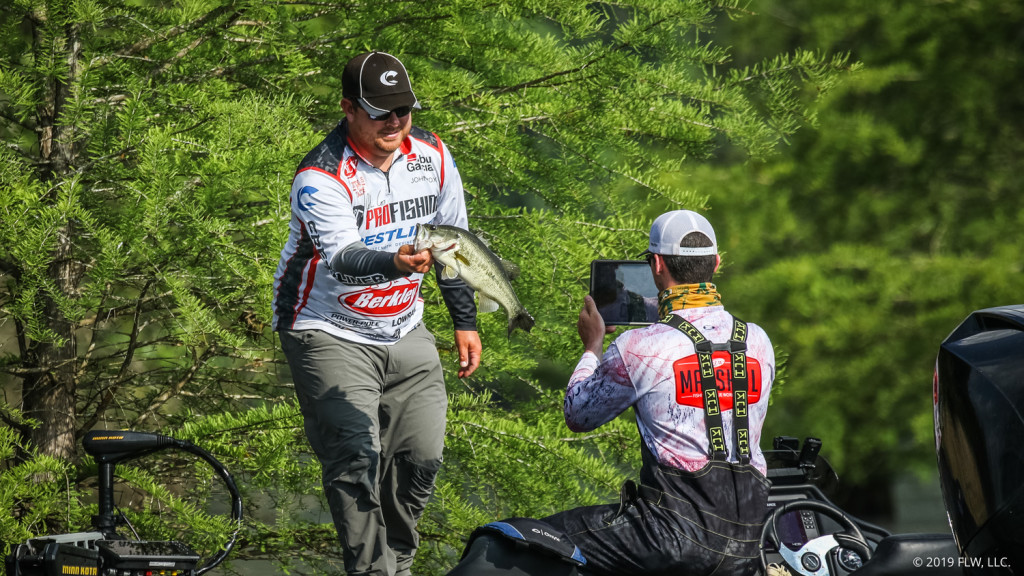 Jeff Dobson just filled out a limit for 15 pounds. Scott Martin found a few good bedded fish and will have a legit shot at fishing tomorrow. Ron Nelson is mixing things up between his bedding fish and offshore spots. A bunch of other pros are scrambling around just looking for anything that’s biting.

Well, that’s a wrap for today’s blog. The morning bite was way better than what the afternoon had to offer, but there are still a few hours for the pros to get something going. Thirty pounds will be right around the cut mark to make the top 30. Watch the weigh-in on flwfishing.com at 3 p.m. ET.

In the meantime, here’s a highlight video from some of yesterday’s best fish catches:

Aaron Britt is keeping the momentum rolling on his ledge. He just culled up to 22 pounds total. He only had 8 pounds yesterday, so he will be on the bubble of making the cut this afternoon.

Overall, the super big fish seem to be a little more reluctant to eat today. The ones guys are finding on bed are definitely in the middle of doing their thing and aren't too interested in baits being thrown their way. Dakota Ebara has one near a dock that he can’t get to go. There’s still plenty of time for the pros to get the bed fish to eat, though, and since it’s cut day you can guarantee every single known bed will get some attention.

Meanwhile, the offshore deal isn’t exactly electric either. We’re definitely getting reports of fish being caught, but they don’t have a whole lot of size to them. We could possibly be hitting a little lull, or the pressure is getting to the best areas.

Ron Nelson’s marshal reported that the Michigan pro is working a few bed fish. The one he’s sitting on right now is about a 5-pound female. That fish would be huge for Nelson as he hasn’t necessarily been hammering on them today.

We got our first report from Matt Greenblatt. He currently has 14 1/2 pounds and is working a big flat with a finesse approach. His limit is good enough to land him in second place, unofficially.

Miles Howe just bagged a 9-pounder and now has 13 pounds in the box with just three fish. A few more decent ones and he will for sure make the cut.

John Cox just culled out a 2-pounder for a 3-pounder. He thinks his total weight is somewhere around 16 1/4. Yesterday, Cox underestimated his weight by about 4 pounds, so he could definitely have more than he thinks.

Barry Wilson just culled up to 18 1/2 pounds. He only had 12 pounds, 7 ounces yesterday, so he has to feel happy with how his day is going. 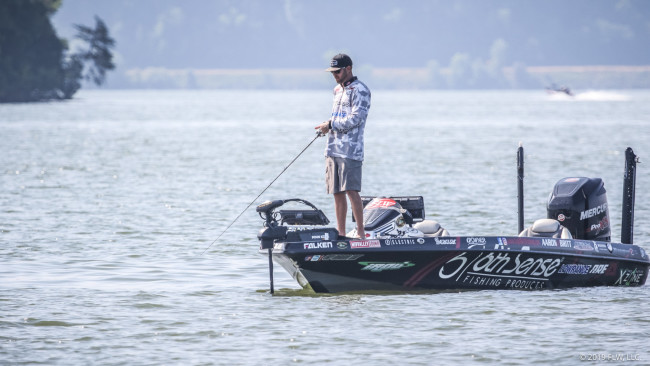 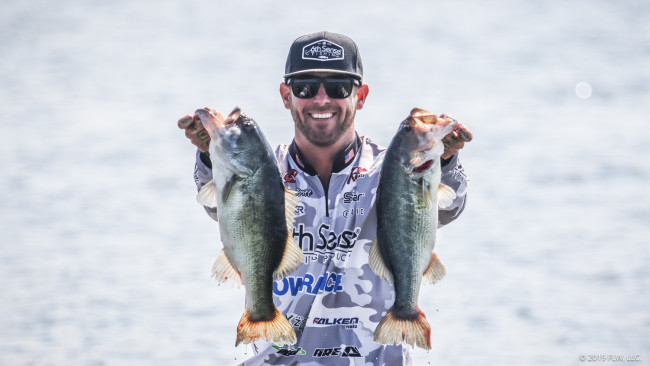 California pro Aaron Britt has quietly been putting together a nice sack today. Right now, he has 20 pounds in the boat. When we pulled up to Britt he was fishing a moving bait on an offshore ledge toward the lower end of the lake.

Scott Martin finally got a grown one to eat. The fish went for 5 pounds.

Scott Martin has a few small keepers to show for his efforts this morning. Martin's marshal says that the pro is currently sight-fishing a giant but can’t get her to eat. Tim Malone’s magic ledge turned off. He is still stuck on three keepers and is fixing to find new waters.

Barry Wilson just stuck a 7-pounder, which brings his limit up to 15 1/2. More big fish reports should start coming in soon. This was about the time yesterday that the giants started to fall.

Tournament leader John Cox got fish No. 5 in the box and now has a 4-pound lead. Cox never did catch the giant (10- to 12-pounder) that he found on bed yesterday. We’re assuming he'll make numerous trips to her today to see if he can get her.

Kyle Weisenburger capped off his limit with a Chickamauga 6-pounder. He still has three fish in the livewell that he can cull out. If he does that he may have a shot at making the cut. 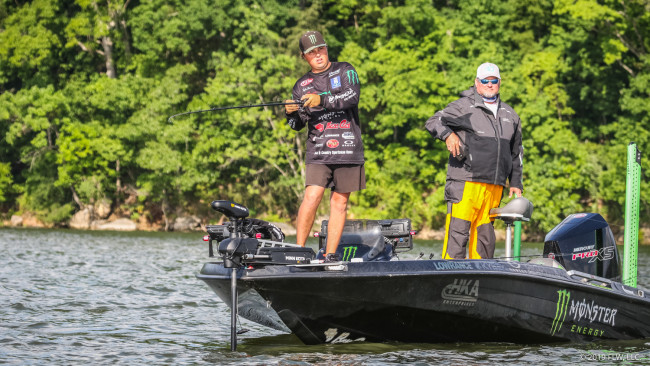 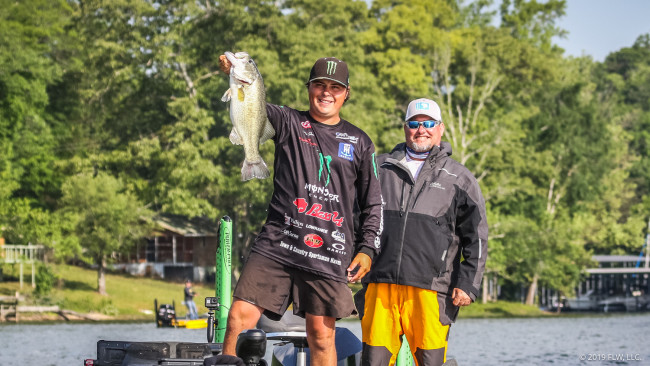 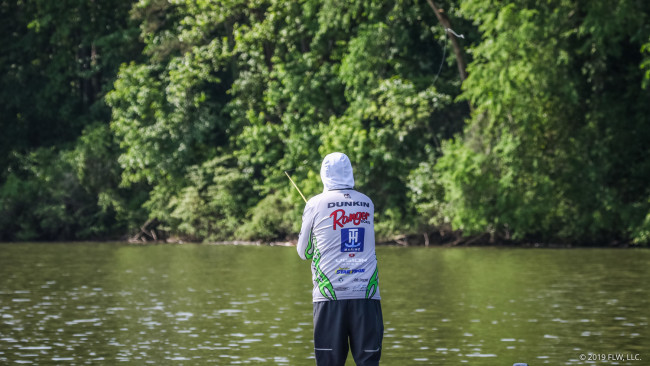 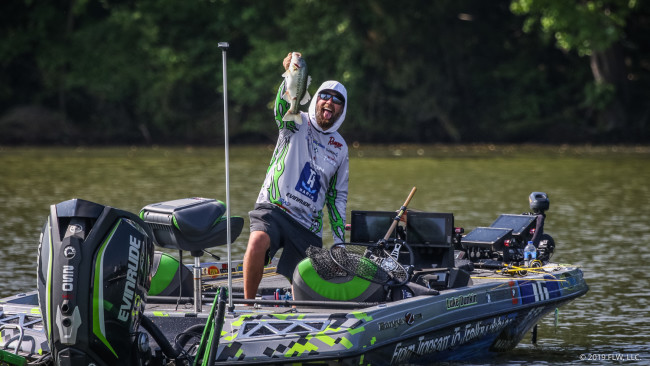 Tyler Stewart has had a bit of a sophomore slump on Tour but is getting things together today on Chick. The Louisiana pro has 16 pounds in the livewell and is still catching fish. He’s been working a main-lake ledge.

Luke Dunkin is also having his best tournament so far. Right now, Dunkin is catching fish literally every cast, but most are just 2 1/2-pounders. If Luke can sift through the cookie cutters and get on better quality he should have no problem making his first cut of the season. If you want to see a little more of how Dunkin's season has gone, check out his latest Traveling Circus video below. 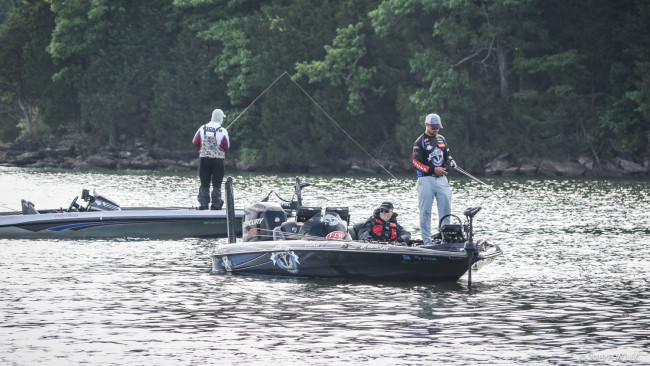 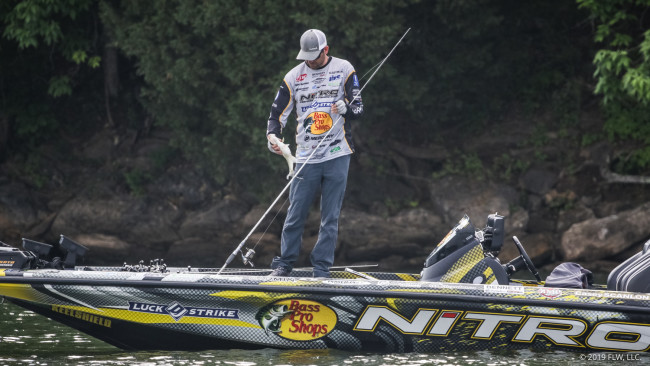 The offshore deal was bound to get more and more popular as the tournament went on. We've heard reports of huge schools of fish moving out to certain areas. And we actually just saw Scanlon, Hahner, Wicker and Brewer all fishing a community ledge on the lower end of the lake. However, they haven't had much to show yet.

James Niggemeyer has four fish in the box. When we rolled by him he was picking up a floating water bottle just outside of some shallow grass. Perhaps the good deed will earn Niggemeyer some good luck and make fish No. 5 a giant. 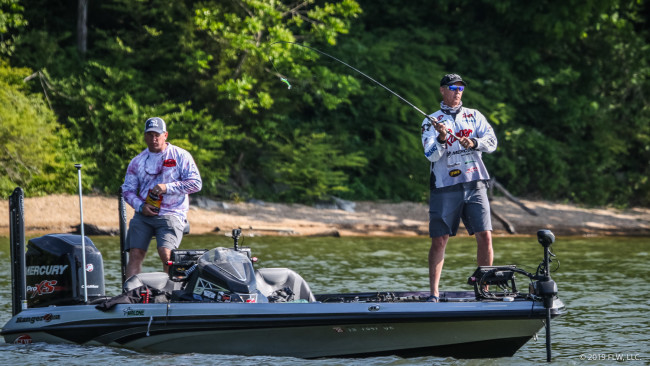 Tim Malone is lighting them up on a main-lake ledge. He has three fish for 16 pounds total. Malone also missed one that was pushing 10 pounds. If this ledge keeps kicking them out, he could be working on a mega-bag. 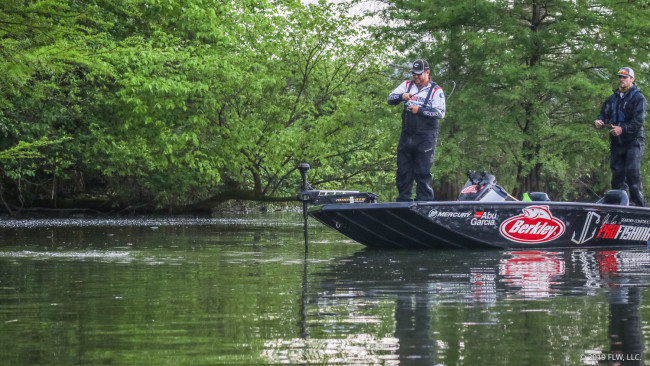 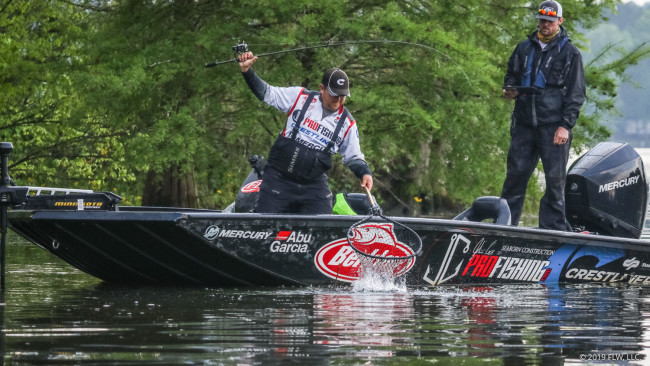 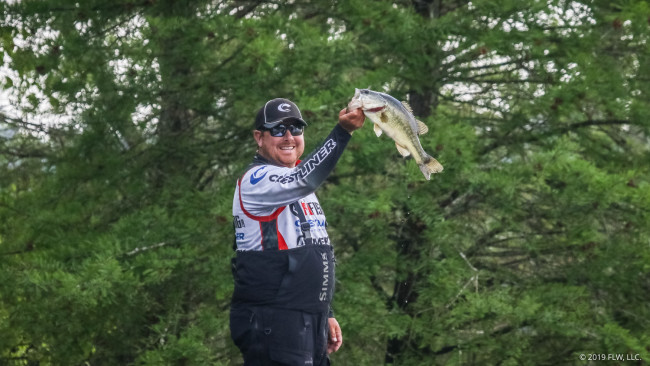 Yesterday, there wasn’t a whole lot to talk about guys locking up to Watts Bar. Chris Neau has changed that as he has 11 pounds from the other Tennessee River reservoir. His catch includes a 4-pound smallmouth. He still has one empty spot in his livewell to fill too.

John Cox was able to pluck another 3-plus-pounder from a spawning area. The water in the spot he is fishing appears to be getting a little dirtier and higher than it was yesterday. He says he might be exploring some different baits to cope with the changing conditions.

On a side note, David Dudley took over the unofficial AOY lead from Miles Burghoff. Assuming Dudley doesnt slip too much, Burghoff will need a stout bag today to catch back up, and Scott Martin could get back in front with a good showing today. 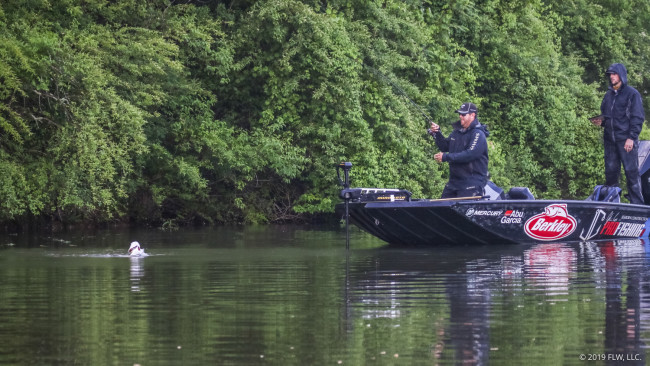 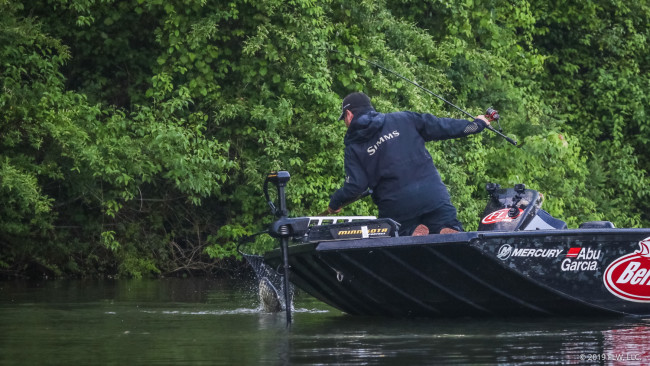 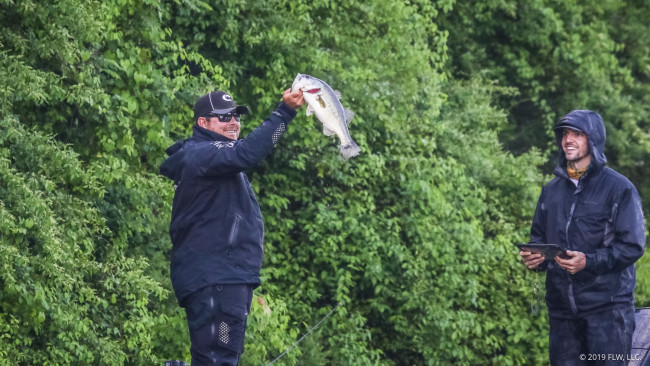 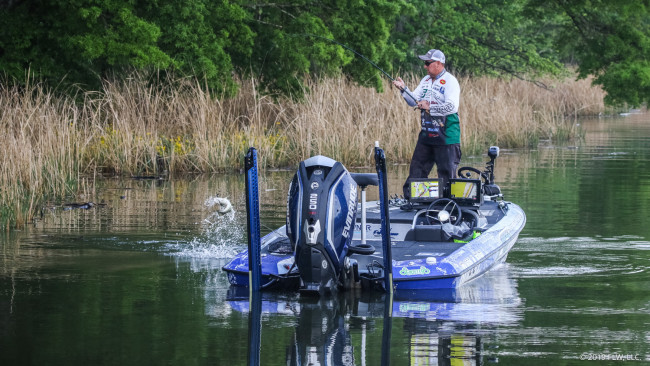 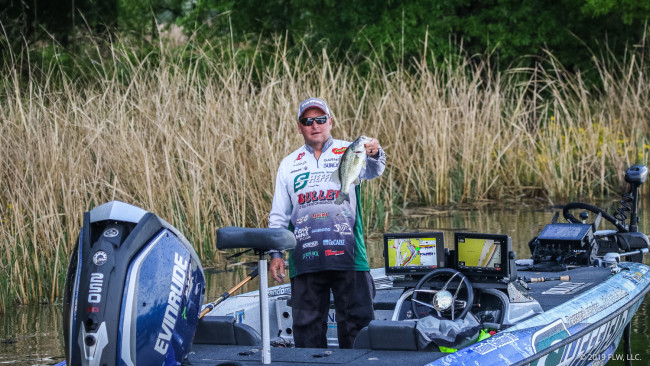 The fish catches are rolling on from Chick. Dicky Newberry started out the day hot, catching four quick fish. Speculating solely on the speed with which Newberry caught his fish, it's likely he found a shad spawn. Ryan Salzman has five fish in the boat. Like Newberry, Salzman is probably capitalizing on a morning shad spawn.

John Cox just boated his second fish of the morning. The fish was a 4 1/4-pounder and came off a bed. Ron Nelson started the day on a ledge but didn’t catch much. He just made a move to shallower water to see if he can pull anything off the bank. Ramie Colson Jr. is also up shallow and has a single 2-pounder to show for his efforts. 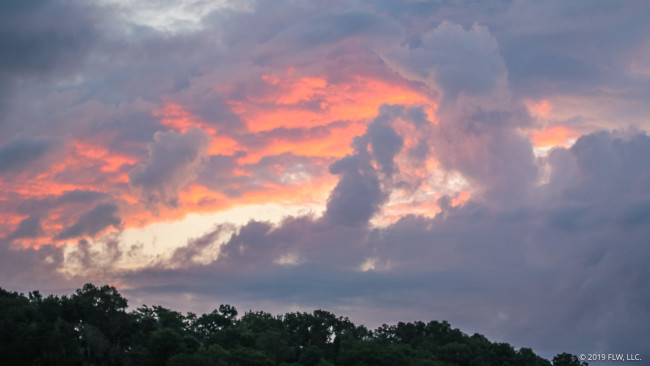 It's starting to rain on Chickamauga now, and there are reports of some thunder and lightning not far from the lake. Pros will take precautions to get out of the weather when necessary. Mostly, the conditions just make it uncomfortable to fish, and tough to see bass on beds. John Cox started in a creek with David Gaston but didn't stay long. He's on the run to the back of a spawning area now. So far there have been quite a few fish caught. No giants to report yet, but they'll come. 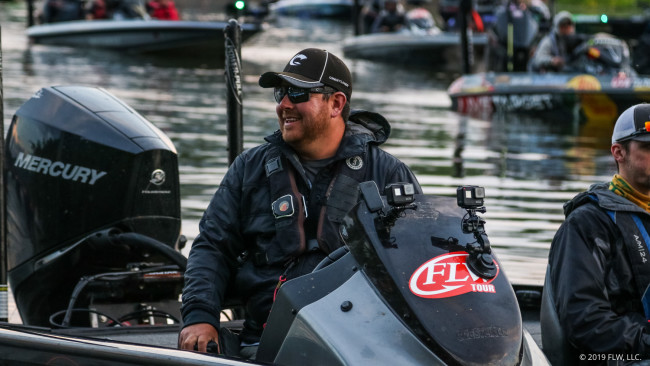 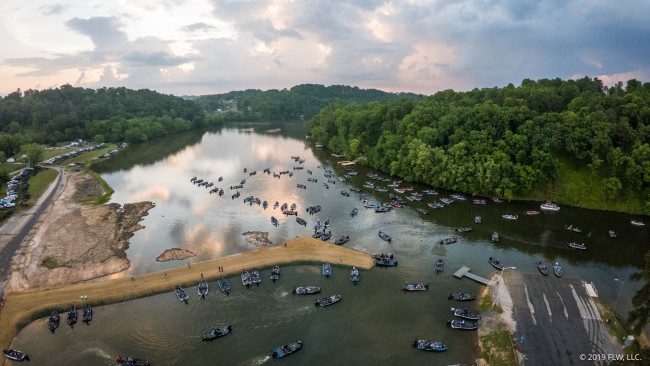 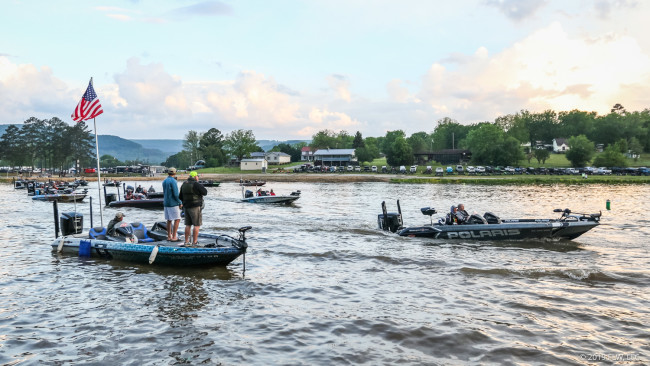 When John Cox is leading a tournament, you have to assume there are bass on beds. At Lake Chickamauga this week, if you made that assumption you'd be correct. Cox caught 24-plus yesterday to take the early lead, and the lake's largemouths are in the final throes of the spawn. The question is: When will it end? Odds are, no one will be able to rely solely on sight-fishing for four days. And to be fair, few pros relied solely on sight-fishing on day one. There are a lot of patterns in play so far. Big bags were caught on ledges, off the bank on shallow postspawn structure, on the bank, around docks, from beds, on topwater and just about any other way a pro might want to catch a bass. There were near-10-pound fish, and 12 limits of more than 20 pounds. It was a stellar first day. Now, with some thunderstorms popping up around the lake, it's cut day. Anyone hoping to get to the weekend needs to be on his game and catch another quality bag.