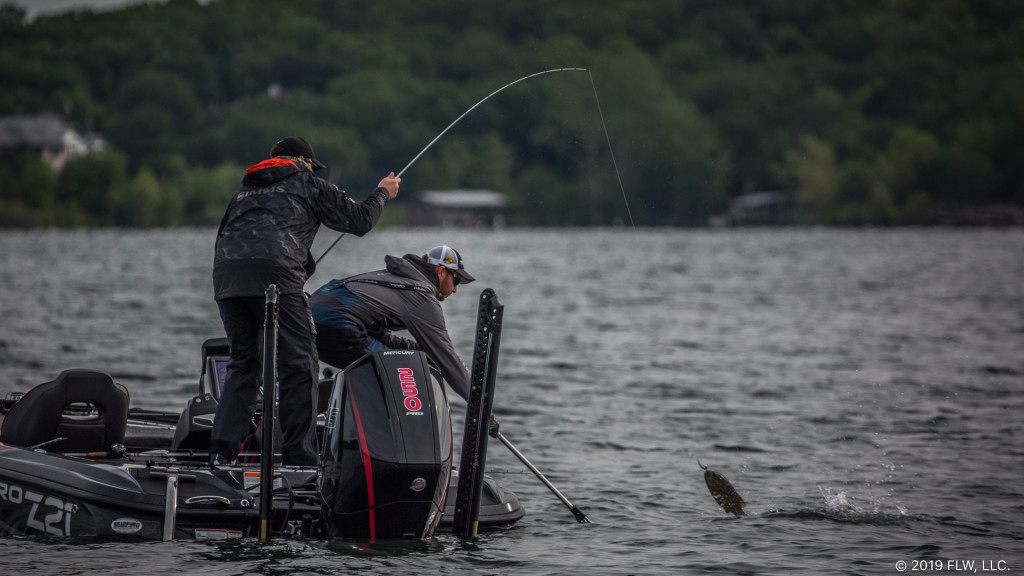 Yesterday, it’s as if the bass were jumping in the boat. Yes, the quality was lacking, but quantity was not an issue for the majority of the field at stop No. 2 of the Costa FLW Series Central Division.

Unfortunately, a week’s worth of great fishing seems to have come to a screeching halt this morning, thanks in large part to the cold front hitting the area this morning.

While the field took off under beautiful blue skies, it quickly turned cloudy, and it seemed like the temperature was dropping instead of warming up. At one point late in the morning, anglers and our on-the-water crew were lamenting being able to see their breaths despite the air temperatures supposedly in the 50s.

While most pros said the weather and yesterday’s rains didn’t seem to impact the water temperatures, it certainly impacted the fishing, most notably for anyone keying on shad.

Second-place angler Matt Wood said his tiny area on the lower end was still loaded with shad, but the wind and cold have them balled up tight to the bottom as opposed to up in the water column like yesterday. That’s a big reason why he figured his schooling bite hasn’t really happened today. Evidently, bass were blowing up around him all morning on Thursday, including the 6-11 giant he caught. Yet, today he only saw a handful and never really got them to commit to his topwater.

Instead, he was adapting and grinding it out with a single swimbait. He says he’s been watching the bass follow in his umbrella rig on his electronics, but they won’t eat it. He had 11 pounds when we first rolled up on him, but he made a move to a point and caught three fish in three casts – two smallmouths and a chunky spot – to upgrade to 13 pounds.

Third-place pro Todd Castledine also said his primary smallmouth area was completely devoid of baitfish after it was loaded yesterday. He caught a smallmouth on his second cast, but only managed one more before leaving after more than an hour. Fortunately, he said he found a spot where “it got fun for a minute.” He quickly sacked up a limit and said if the bigger fish hadn’t been missing his topwater he could’ve brought in a really big bag. Instead, he had around 11 to 12 pounds and figured he’d need the largemouth he lost yesterday on a bed to ensure he fishes tomorrow.

Shane Long also had 12 pounds fishing more mid-lake, but beyond that, there wasn’t much going. Jared Dial’s smallmouth spot has turned into a spotted-bass spot, as he had three small ones. Mike Dove had four little ones. Keith Houston had one while trying to make an offshore bite go before heading to the bank to sight-fish like he did yesterday.

Hunter Baughman swore off largemouths before the event, but after just catching babies (and not many of them) this morning, he thought he might go do some flipping. Of course, 10th-place pro Josh McDermott abandoned his largemouth areas due to the cold wind and instead switched to smallmouth, of which he’d caught just one when we saw him.

The biggest question is whether or not leader Jake Morris’ pattern also got hurt by the cold. He’s making such a long run that we weren’t able to get any on-the-water updates today. So we’ll have to see if his hour-plus run was worth it again come weigh-in at 2 p.m. CT.