Coots and Keitner take the hardware with 32+ over two days 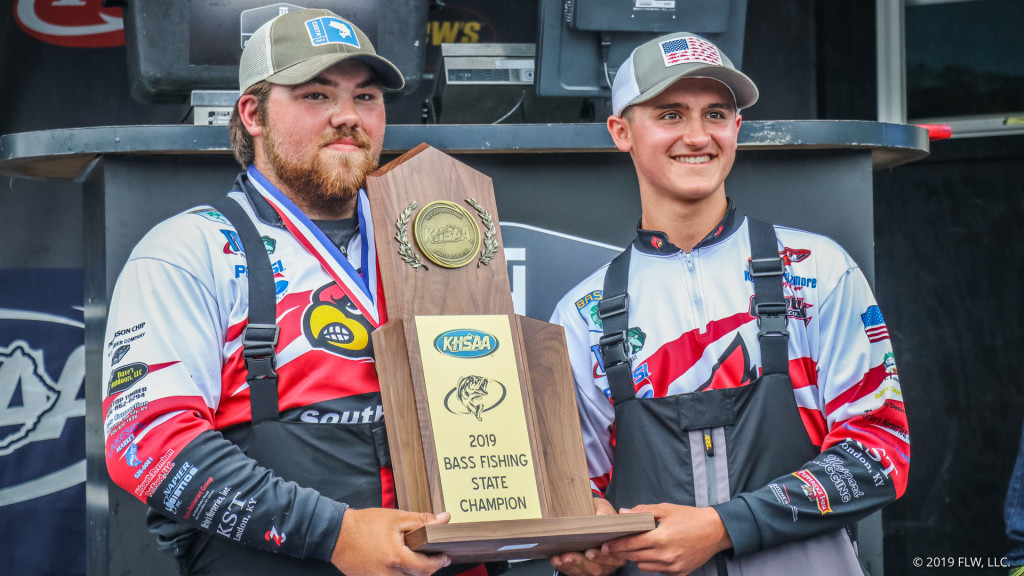 The South Laurel High School team of Shawn Coots and Trent Keltner weighed 19 pounds, 9 ounces on day one and 13-4 on day two for a 32-13 total and the win in the 2019 Kentucky High School Athletic Association (KHSAA) State Bass Fishing Championship on Kentucky Lake. The win earned the team medals, a trophy to display in its school and the title of KHSAA state champion.

Supported by FLW, the championship was a two-person team event for students in grades 9-12. 2019 marked the seventh year of the championship event, which featured a field of 88 teams that qualified from four regional competitions in April.

Coots, a senior who has signed to fish at Campbellsville University, and sophomore partner Keltner started strong on day one and made the right adjustments on day two to hang on to the lead.

“In the previous years we went we always fished shallow, and those fish always changed,” says Keltner, who has fished on his high school team since seventh grade. “This year we decided to fish deeper; not the ledges, but places in the creeks where they’ll move out to after they spawn.”

“We had, like, 30 fish on day one, almost all on a jig. That was our main key,” says Coots. “We were catching them coming out of pockets, where the contour lines were tight on points and straight banks – basically on holding spots before they went out to the main ledges. We were sitting in front of docks and fishing there instead of the banks.”

The team mostly fished brown and green 3/8- and 1/2-ounce jigs trailered with green pumpkin/blue Missile Baits D-Bombs on day one, but also mixed in 3/8- and 1/2-ounce Texas-rigged Zoom Ol’ Monster worms in the tilapia color. Fishing in about 8 to 10 feet of water, the two anglers barely ventured south of Bear Creek, not far from the takeoff site at Kentucky Dam Marina, through the whole event.

“We were boat No. 2 on Friday [day one], and we were the second to last out on Saturday,” Coots adds. “The morning bite was key. We had a limit before 7:27 a.m. the first day. The second day we only had three off the bank we’d been catching them on in Sledd Creek.”

With a tougher bite on day two, the pair adjusted jig trailers and went a little smaller. Changing locations, they caught a 5-pounder on a jig with a green pumpkin Reaction Innovations Smallie Beaver. That fish and the rest of their limit was more than enough for the win.

“I’ve loved it; it’s been a great experience for me,” says Keltner of his short time in high school fishing. “I’ve seen a lot of new things and met a lot of new people. Winning this was unbelievable. It was a great feeling that I’ll remember for the rest of my life.”