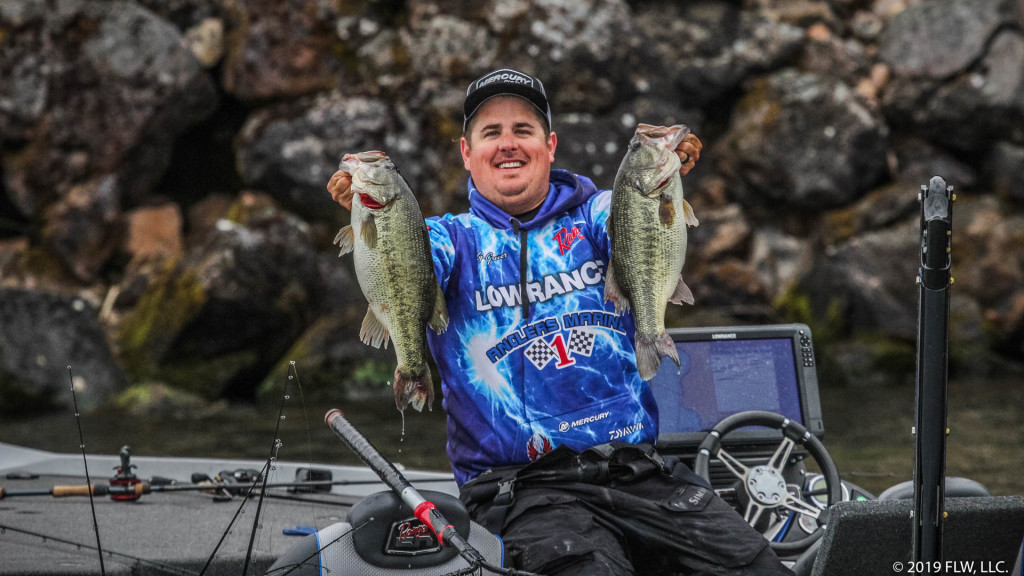 After taking a brutal pounding from the strong winds of day two, the top-10 pros and co-anglers in the Costa FLW Series Western Division event presented by Ranger Boats are taking advantage of Clear Lake’s calmer final round conditions. A steady light rain began around 10 a.m., but without yesterday’s white caps, the lake’s allowing easy runs to wherever anglers want to fish.

When we found day-two leader Joe Uribe Jr. he was grinding through lots of fish, but struggling to find quality. He was drop-shotting his favored Roboworm and had about 14 pounds by mid-morning. 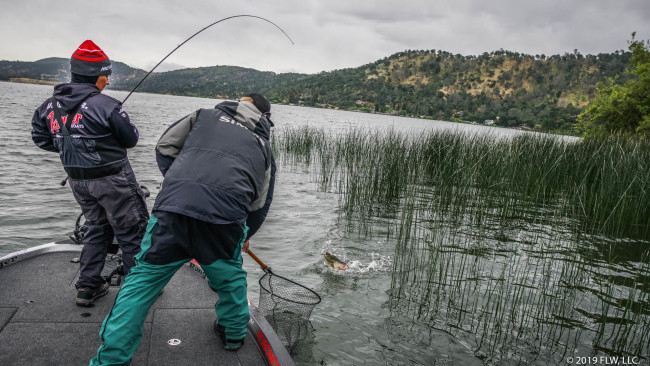 We would not be surprised to see Uribe bust 20 again today and keep himself in competition for the win. To do so, however, Uribe will have to hold off the momentous charge of fellow Clear Lake veteran Kyle Grover, who made a big move from 25th place to second yesterday on the strength of his 23-pound, 14-ounce limit.

During Friday’s weigh-in, Kyle Grover noted that he was not fully aware of his spot’s potential on day one, but figuring it out led to a huge second round. Suffice it to say, the California pro has the situation firmly in hand, because he had his limit today in the first 20 minutes — including a 6-pounder on his first cast — and culled his way up to 25 pounds by mid-morning.

Grover’s working a very obvious main-lake shoreline with a crankbait and a jig. The key is slow, methodical coverage.

Sharing the spot with Grover, third place Andrew Loberg also had an early limit, but as of mid-morning, he was still looking for a big bite to blow up his weight. Loberg’s committed to cranking and told us he wants more wind to help stimulate the reaction bite.

Elsewhere, we saw seventh-place pro Bryant Smith filling his limit thanks to a topwater. He’s fishing tight to the tules and held up No. 5 at 6:50 a.m. He’s 5 pounds off the lead, but with dim, damp conditions keeping the topwater in play all day, he could be one big bite away from a big move.

Day-one leader Lane Olson also caught an early limit but, as of mid-morning, he had yet to find a big bite.

Today is fish-catching weather and how this plays out is anyone’s guess. Tune in to watch how it all unfolds at 2:30 p.m. PT.