Jackson Crushes on Day One of FLW-KBF Cup 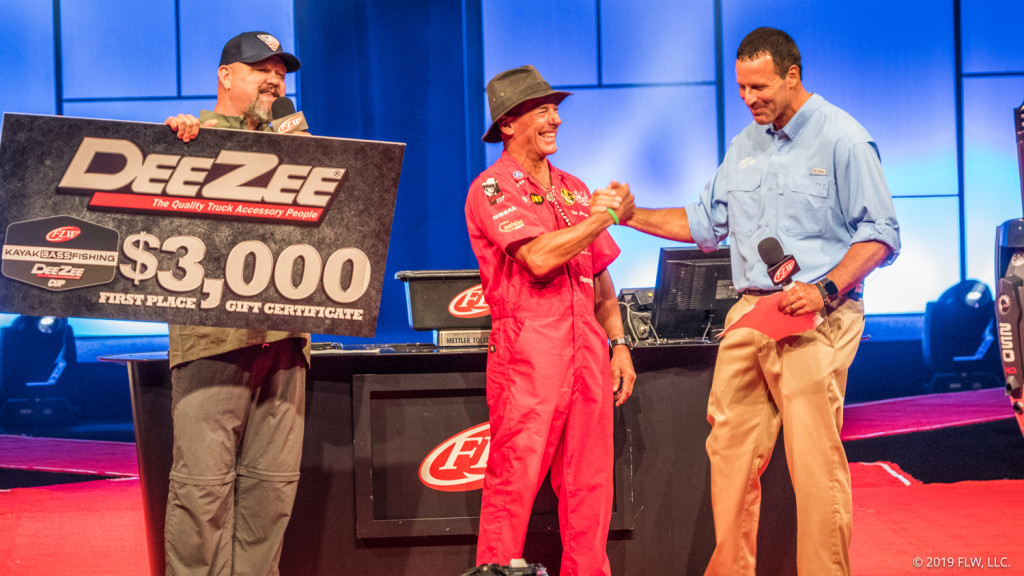 Eric Jackson is simply a hammer fishing from a kayak. The FLW Tour pro and owner of Jackson Kayak is fresh off an individual and team gold-medal-winning performance in the 2019 Pan Am Bass Kayak Championship (not to mention a third-place finish in the final 2019 FLW Tour event on Lake Champlain), and his five-fish limit of 98.25 inches on day one of the Dee Zee FLW/KBF Cup presented by YakAttack puts him in stellar position to earn another victory on Saturday.

The two-day event with a top prize of $15,000 ($12,000 cash and a $3,000 Dee Zee gift card) was a mystery to some, mainly because Lake Ouachita can be brutally tough in the heat of midsummer. For Jackson, mystery doesn’t even begin to describe what he was facing in practice leading up to the tournament.

“The last few weeks I’ve been up in Canada teaching whitewater kayaking up there,” he explains. “I didn’t have my fishing kayaks or anything with me, so I had to borrow a fishing kayak to come down. Two hours into the drive I realized I forgot my electronics. My whole plan for this trip – I’ve been watching all the videos – was fishing offshore.”

Ouachita’s offshore brush piles are quite often what provide the best fish in the summertime. Without electronics, Jackson was unable to search for that offshore gold, instead opting to beat the bank and look for another strong pattern.

“Monday, Tuesday and Wednesday I practiced with no electronics and just fished the bank, basically,” he adds. “I got on this sight-fishing deal, and I just cruised around looking for wolf packs. My third day I only caught two fish. I wasn’t convinced I was on the right deal.”

Jackson expected to install electronics on Thursday and perhaps still find something offshore, but when his electronics arrived, he realized a transducer did not. He was left with the only thing he found that worked to that point in practice.

As it turns out, that’s all he really needed. Jackson caught two 21-inch bass – which he watched eat his bait after casting directly at them – on Friday and added another 20-incher he blind-cast to. His 98.25-inch limit is equivalent to roughly 19 to 25 pounds of fish, give or take, depending on the time of year.

Regardless, Jackson worked on them Friday. 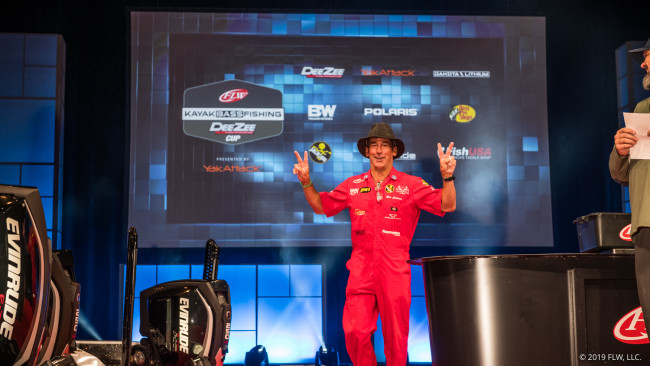 “Almost every fish I caught on a Strike King Tour Grade swim jig and a [Strike King] Rage Menace trailer in a bluegill color,” he says. “I’m just basically going after bass that are feeding on bluegill. I’m standing on my kayak paddling along. I’m standing and paddling until I see the fish.”

With no electronics (and really no need at this point) and no spinning rod (his only one fell in the lake), Jackson is dead-set on replicating his day-one pattern.

In second place, Dustin Murguia had a similarly shaky practice, with a couple days he admits were pretty awful.

“The day started with zero confidence on catching a limit,” he admits.

But things started to look up in a hurry, as Murguia landed a 19.25-inch kicker bass for his second fish of the day.

“That was my kicker fish, so I got really excited about that,” he says. “Even if I put together a small limit, with one kicker in conditions like this, you could be doing really well.”

And he certainly was. Murguia also managed to find a cove that was loaded with baitfish and bass to chase them around. Utilizing primarily a buzzbait and a River2Sea Whopper Plopper, the Illinois angler hammered on them to the tune of 85.25 inches.

The key, Murguia says, was finding the right kind of banks to target.

“I found them between 2 and 5 feet, and I found them next to banks that had a little steeper drop-off than the normal slope,” he explains. “If I could find that and a little timber and any type of weed whatsoever, that seemed to be the juice.”

Even so, his confidence level is what some might consider less than ideal heading into the final day of competition.

“I’m not confident that’s going to hold up,” Murguia adds. “I don’t have a Plan B. I did not find multiple good-looking things in practice. I’m going to do the same thing I did today and hope. That’s all I have, because in practice there was nothing that suggested otherwise.”

Currently in third place, Clint Henderson is at the opposite end of the confidence spectrum. The Rome, Ga., angler and founder of Fishers of Men Kayak Fishing is absolutely elated about what he found and exploited on day one.

“I’ve never been set up this good for a tournament,” he says of the deal that produced 81.25 inches on Friday. “I’ve never found something like this before. It’s special. No doubt it’ll hold up.”

That deal isn’t so much a pattern as a location. Henderson found a “massive school” in practice, and he hammered on it all day to start his tournament.

“I knew with the rain and being early morning that they had pushed up shallow, so I went to the closest bank,” he says. “I ended up catching my first fish on topwater, missed two more, and when that died off, I pulled back out to where we had found the school offshore and fished that the rest of the day.”

Henderson employed a topwater, a creature bait and what he describes only as a “flashy shad-imitating bait” to do his damage on day one. And if he has that same school all to himself Saturday, he’ll be right back in business with the same baits.

If he does indeed have it to himself, Henderson may have enough ammunition to give Jackson a run for his money. Or, rather, a run for the $15,000 top prize.

All 72 anglers will compete on day two with the winner determined by cumulative total.