Canada Wins Gold at Pan Am 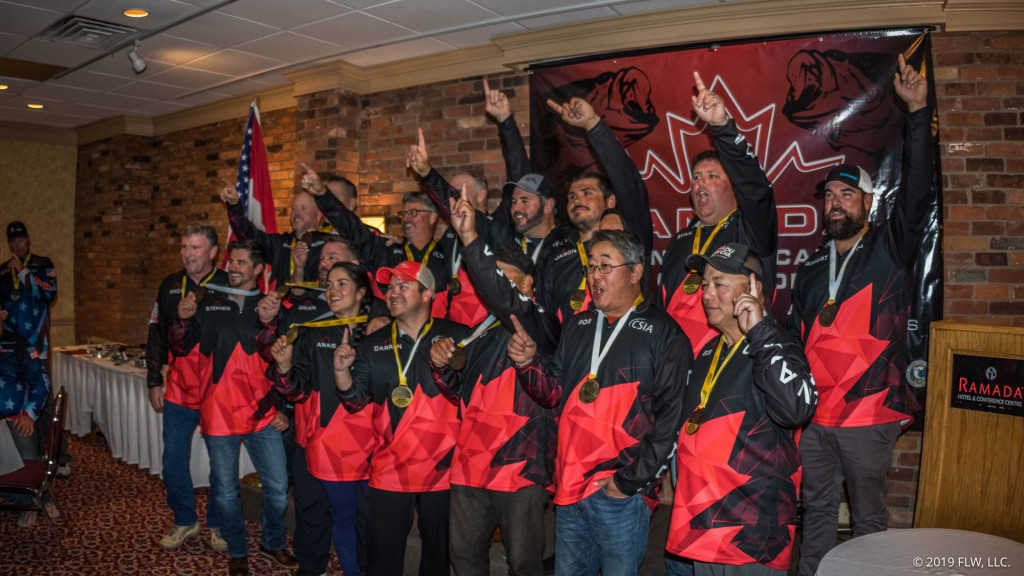 Though Team USA locked up the top three places, Team Canada placed six teams in the top 10 and averaged 38.98 pounds to win the Pan American Bass Championship on Lake St. Francis. Results were tallied based on the average weight brought in by each team in the two sessions of fishing, which almost guaranteed an extremely close finish. Earning a silver medal, Team USA finished just a hundredth of a pound back with a 38.97 average.

Earning bronze, Team Mexico had a tough afternoon overall and finished with a 28.62 average. Team Akwesasne First Nations brought up the rear with a 23.97 average.

Nicolas Gendron and Jason Gramada were the highest-finishing Canadian team at fourth, and they also weighed the big fish of the day, a behemoth 6.26-pound smallmouth. 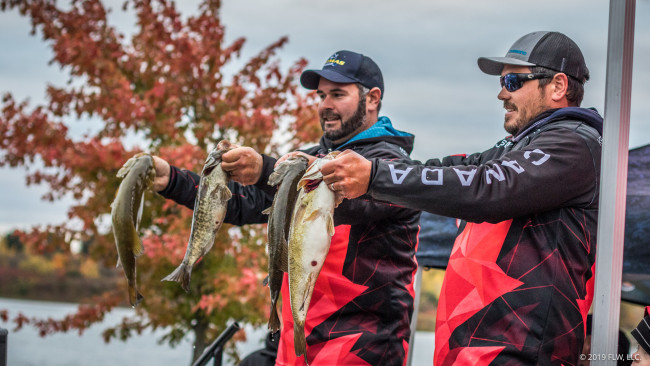 Gramada and Gendron took a power approach to the day, and as one of the truly local teams in the event, they were able to fully apply their history on St. Francis.

“We’re from here, we’ve got a lot of history here, we’ve won some Canadian Opens on this body of water,” says Gramada. “This time of year, the fish migrate up towards the dam. It’s kinda unique, there are three major spawning tributaries, and I think they do their wintering there to get ready for the spring spawn. So, it’s not a secret, that’s why the weights are so close – it would have been way different fishing had it been a July or august tournament.”

With horrible weather on the canceled day and cold, breezy conditions on the competition day, they knew what adjustments to make.

“It’s funny, as the weather gets worse here the bite gets better,” says Gramada. “They start getting aggressive on moving baits. We focused on sand to weed transitions, and they sit really heavy in the grass.”

Throwing a ½-ounce white and gold spinnerbait with Colorado and willow blades was the ticket in the morning when they caught 2.58 pounds. They switched up some in the afternoon session to box up 22.28.

“In the afternoon we made a switch – we heard from one of our team members that they had caught two 5-pounders on a ChatterBait, so we made that switch and caught that 6.26 first thing in the afternoon.”

The bait they turned two was a Z-Man ChatterBait Freedom with a Jackall Rhythm Wave swimbait for a trailer, but it wasn’t the only adjustment they made in the afternoon – the pair also plucked a 5-pounder off a deep hump late in the day.

Team Canada was ecstatic about the win, and Gramada and Gendron were no different.

“It feels amazing,” says Gendron. “It’s another accomplishment for us, bigger than the Canadian Open.”

Gramada was downright effusive in his praise for the event.

“There’s no money on the line for this, and we woke up and were more nervous than going into day two of a Canadian Open where first place is a boat,” he says. “That in itself showed me that it is way bigger than anything else. And then there’s the camaraderie, to have David Dudley jump in your boat and do a YouTube video or walk to dinner with Roland Martin – that’s unbelievable.”