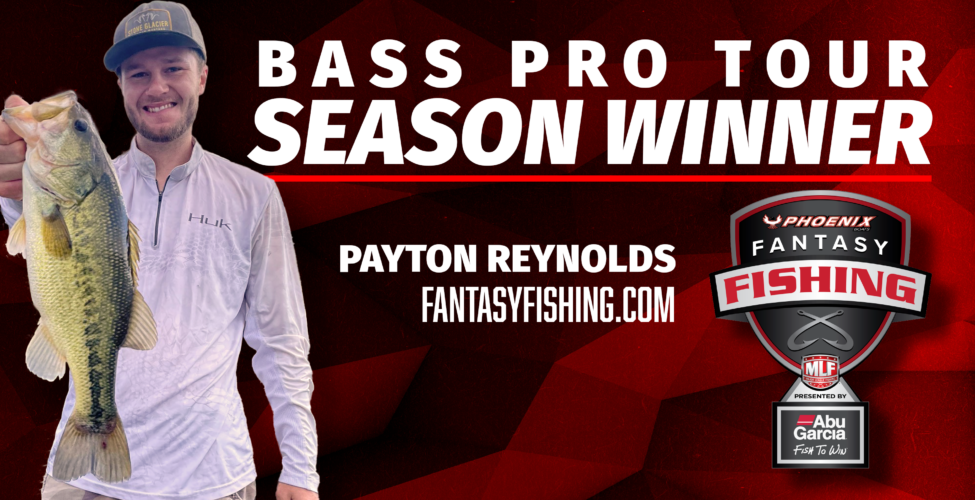 There may be such a thing as beginner’s luck with the 2022 Phoenix Fantasy Fishing Presented by Abu Garcia Bass Pro Tour champion, but when you see how much work went into this fantasy season for Payton Reynolds, it becomes easier to comprehend.

“I’ve never done any sort of fantasy league myself before this,” Reynolds said with a shrug. “I just love watching MLF and when they announced the Fantasy Fishing, I figured I’d give it a shot. My life revolves around hunting and fishing.”

The Watertown, South Dakota, native’s picks totaled 7,671 pounds, 15 ounces for the year, beating the second-place player by a whopping 179-6. Through seven events on seven different bodies of water, Reynolds made 70 picks that turned out to be the right ones. Reynolds says his familiarity with the anglers on the Bass Pro Tour helped him out a lot in the 2022 season.

“I’ve been watching the Bass Pro Tours since it got started in 2019, so I’ve really gotten to know how these pros fish,” Reynolds said. “I’ve learned how a certain body of water can fit a particular angler’s style. I put a lot of thought into each event before making my picks.”

Reynolds devoted hours of research before making his picks — which included reading every “FantasyFising.com Insider” article on FantasyFishing.com. He would compare his own analysis to who our Insiders were picking as well as what the other pros picked for their respective teams.

“I would have my picks lined up about two weeks before each tournament,” Reynolds said. “I would take those two weeks and think about them, do more research, read the articles and then lock in my picks.”

Reynolds had three spots automatically filled each tournament with Jacob Wheeler, Dustin Connell and Jordan Lee. Reynolds also included Justin Lucas into his roster in five out of the seven events. So at every event, Reynolds had the eventual Angler of the Year in Wheeler, the AOY runner-up with Lee, the eighth-place angler in AOY in Lucas and a three-time winner in 2022 with Connell.

Reynolds also reviewed his picks and found that at least eight of his 10 picks at every event made the Knockout Round while five out of his 10 picks would move on to the Championship Round.

“Those Championship Round guys were so important in my team doing well,” Reynolds said. “If you could keep stacking weight on the final day with five guys while a lot of other teams only have one, two or three guys fishing, that can add up pretty quick.”

Reynolds found himself inside the Top 50 after Stage Four on Lake of the Ozarks. The South Dakotan took the lead in the standings after Stage Six on Cayuga Lake. That’s when it all started to sink in.

“Once that Cayuga Lake event ended, that’s when I started to really feel like I could win the whole thing,” Reynolds said. “I was 150 pounds ahead of second place going into the final event on Mille Lacs. I was watching that whole tournament on pins and needles. As soon as the clock hit zero, it was a surreal feeling knowing I beat out all these people.”

Reynolds went on to win by more than 175 pounds and earn an MLF prize package which includes a fishing trip with one of his more reliable picks of the year — Justin Lucas. A fan of MLF for more than six years, Reynolds is beyond appreciative of the win and of MLF.

“I just love watching MLF and watching all these tournaments on lakes all around the country,” Reynolds said. “To have a season’s worth of work end in a win like this is just an awesome feeling and I can’t wait to try to do it again next year.”