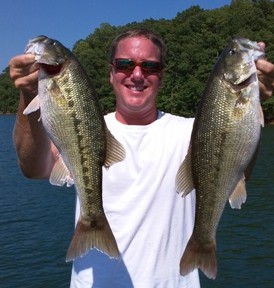 As of yesterday, July 19, Lake Lanier is officially off-limits to all Forrest Wood Cup qualifiers. In other words, the first round of practice is in the books. Competitors can return to action Saturday, July 31, the first of four official practice days. The word from prepractice is that despite the sultry summer conditions, a few plump spotted bass were caught.

Matt Peters, a Minnesota native who moved to Gainesville, Ga., with the 2010 Cup in mind, was kind enough to shoot some footage of his prepractice. Peters is a rookie co-angler on Tour, but fishes professionally back in Minnesota and operates a well-respected guide service. He’s also a major advocate of the sport in general and is active on all the social networking platforms. And for the last few years, he’s spent endless hours learning how to catch those magnum Lanier spots.

In the last few weeks he’s taken out National Guard pro Justin Lucas, two-time FLW Tour champion Ray Scheide and reigning Angler of the Year Bryan Thrift (as if Thrift needs any help). For Peters, it’s a great way to learn from the sport’s best as he continues his ascension to full-time pro. For Lucas, Scheide and Thrift, it’s an opportunity to study Lanier in an accelerated fashion. Take a look for yourself and see what they found. The first video shows off Peters’ mad production skills, while the others deliver more serious fishing content. In particular, look at the giant Thrift caught in the last video. The Forrest Wood Cup, slated for Aug. 5-8, can’t come fast enough.