Jason Meninger’s pendulum presentation was a hit on Lake Lanier 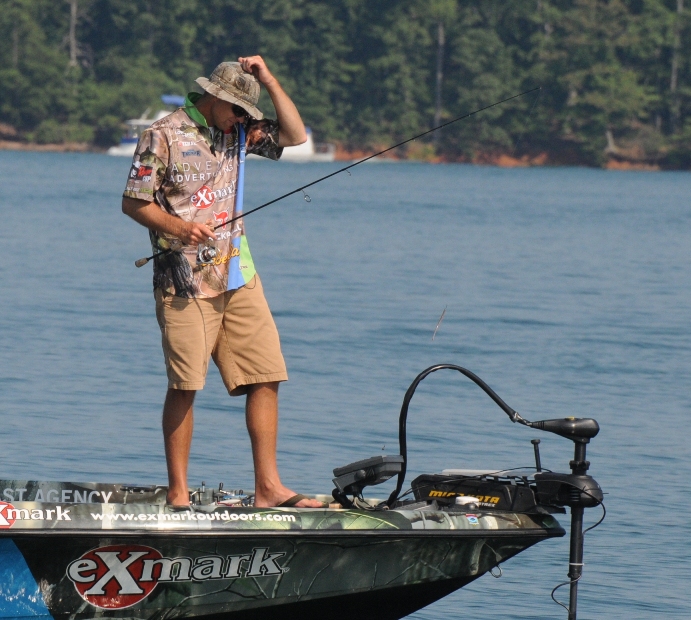 Early in the day, Jason Meninger was scratching his head trying to figure out how to get another bite. Photo by Rob Newell. Angler: Jason Meninger.
August 8, 2010 • Colin Moore • Angler Columns

GAINESVILLE, Ga. – The wheels fell off at 3:07 p.m. Saturday. The fat lady sang. At 3:07 p.m., Jason Meninger threw down the fishing rod with its trailing end of broken line, glanced at his watch and sighed in disgust. There wasn’t time to re-rig, and after a couple of cursory casts with lures that he figured wouldn’t catch the big spotted bass he needed to catch anyway, Meninger headed back toward Lake Lanier’s Laurel Park.

His role in the 2010 Forrest Wood Cup was over, at least for the fishing part. The weigh-in at the Gwinnett Convention Center Arena Saturday evening merely proved what Meninger already knew in his heart. His third-day catch of three fish that totaled a bit over 7 pounds wasn’t enough to keep him in the running, and six other anglers raced down the lake here Sunday morning to begin the championship round. Still, it had been a good ride for the 39-year-old, who reached the Cup in his rookie season with the FLW Tour.

Weeks ago, Hank Parker noted that Meninger was an angler to be reckoned with in the Forrest Wood Cup because “he has blood in his eyes, and he’s good.” Beyond the initial “Jason who?” everyone here came to understand in the past few days that Parker’s assessment was accurate. Though he wound up in ninth place after faltering in the final qualifying round, the Gainesville, Ga., angler made a strong showing in an event whose star-studded roster included several Forrest Wood Cup and Bassmaster Classic winners.

Not only did Meninger win some name recognition, but he also might have introduced a new fishing technique to the tournament world: “swing-shotting.” While drop-shotting was arguably the most productive way to catch bass here during the championship, Meninger employed a variation that involves casting a drop-shot rig out to a distance about equal to the depth he wants to reach and then letting it swing down in pendulum fashion toward the target.

“When bass are close to the bottom, they seem to take a drop-shot rig presented vertically a lot better; when they’re suspended, they like the rig to swing toward them,” notes Meninger. “Sometimes it has to do with the depth of the water; the fish are more skittish in shallow, clear water and don’t like a boat sitting over the top of them. At other times the spots just like the rig moving and coming toward them. I don’t know why that is, but it works for me on Lanier.”

If you watch the broadcast of the Forrest Wood Cup on Sunday, Oct. 10, on Versus, you’ll notice that instead of staring off into space while they’re cranking in lures, the finalists are looking down at something: their fish finders. The 2010 championship was won with electronics, and most of the top 10 developed cricks in their necks from staring down at their sonars to see what was going on down there. It was the same for Meninger.

“I had the sensitivity control of my Lowrance HDS turned up to about 91 percent and the color to about 85 percent,” says Meninger. “I could see my bait (a 3 1/2-inch Jackall AYU Crosstail Shad or a 4-inch Morning Dawn Roboworm) falling; I could see the smallest branches of the trees or brush piles I was fishing in 30 to 38 feet of water; and I could see bass represented as green arches in those branches. You’re not looking for a lot of fish, because you won’t find them, but you’re looking for a few good bass. You’ve got to have the best electronics and know how to use them.”

Meninger had that part figured out, but what finally did him in was 5-pound-test line. He paired strong Spiderwire Camo Braid with a short leader of 5-pound-test Gamma Touch fluorocarbon so that he could feel bites better in the deeper water. Though he didn’t lose a keeper the first two days of the qualifying round, on Saturday he broke off two fish in the 3- to 4-pound range, including one just before quitting time that would have put him in contention.

“It is what it is with light line; you’re going to lose some better fish when they run into brush,” says Meninger. “Larry Nixon can use 10-pound-test line and be just as effective on Lanier; I can’t.”

Disappointed as he is, Meninger can look back on a great season. An advertising agency executive, he qualified for the Forrest Wood Cup in his first year on the trail and picked up some heavy-hitter sponsors along the way, including Ranger, Lowrance, Jackall, Realtree and Exmark Mowers. Just before the Cup, Meninger added Cabela’s as a sponsor.

Whether Meninger can retain his momentum into a 2011 tournament campaign remains to be seen, but he proved that he belongs there. And next year, at least people won’t be wondering who the heck Hank Parker was talking about.