Back Story: Notes from the All-American

All things considered, the 2011Walmart Bass Fishing League All-American wasn’t much of a nail-biter, but that was OK with Jacob Wheeler. When the Indianapolis angler came in with an 18-pound, 6-ounce stringer at the end of day one, the only drama associated with the May 19-21 tournament on Cross Lake involved who would finish second. 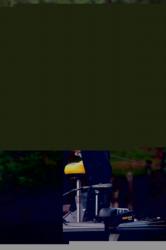 Granted, the 20-year-old Wheeler could have stumbled the next two days, but instead he put more distance between himself and the rest of the field. He wound up with 36 pounds, 3 ounces – 9 pounds better than runnerup Jake Morris of McKee, Ky. Wheeler collected $100,000, a first-class ticket to the Forrest Wood Cup and the attention of several would-be sponsors.

Like Wheeler, Morris and third-place finisher Charles Cummings of Leeds, Ala., were as steady as the mail. Other anglers, most notably Mike Brueggen of LaCrosse, Wisc., made strong runs on one day or another, but their off-days killed their chances. Brueggen had 17-14 the second day to vault from 42nd place into second, but then could only manage 2-10 in the final round.

If Brueggen had a do-over, he probably would have opted not to return to the shallow cypress fields on the northwest corner of the lake that last day. Though he caught some resident bass there in the second round, nothing but grinnels and pickerel attacked his frog on day three. The backwater pattern had blown out for the summer. 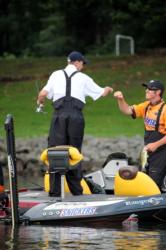 In fact, the top finishers worked the main lake for their bass. Wheeler’s best water included an area where overflow from the Cross Lake Fish Hatchery drained into the lake. The water from the overflow pipe was laden with algae and minute particles of hatchery food that attracted baitfish, which in turn drew bass. It also provided artificial current and oxygenated the water. The flow had stopped for the weekend by day three, but Wheeler nevertheless managed to catch a limit stringer weighing 7 pounds, 9 inches from the surrounding area. His partner that last day was Shane Winchester of Glasgow, Ky., who took home a check for $50,000 for winning the co-angler title.

A Pitching and Casting Show

What does it take to become a pro? Certainly it involves being able to read water and structure, overlaying seasonal and environmental factors smartly, and presenting the right lures exactly where bass can get at them. On that latter score, Wheeler and Brueggen are as good as they come. I trailed each angler for several hours during the tournament, and was impressed with how well they could put a bait in front of a likely bass hangout. The 20-year-old Wheeler, who is the youngest angler ever to have won the All-American, spent most of his time skipping tubes under docks or making precision casts to the bases of cypress trees with a Pop-R. As for Brueggen, it seemed he could pitch a frog into a teacup from 40 yards away, and land it with barely a breath of a splash.

In the April 28 posting of Back Story, George Kapiton’s quest to win a spot as a boater in the Forrest Wood Cup was the topic. Kapiton, of Inverness, Fla., is already qualified for the Cup as the co-angler in the 2010 FLW Series Eastern Division (now Walmart Opens). Kapiton also qualified to fish the Walmart Bass Fishing League All-American as a boater, and set his sights on winning the tournament.

Kapiton didn’t make it, but he came darn close. He started out in 15th place on Day 1 with a 5-pound, 8-ounce stringer, weighed in 11-8 the second day to move into sixth place and make the cut, and then finished sixth with a 5-7 haul. His 22-pound, 7-ounce cumulative weight earned him a check for $17,000, including a $5,000 contingency award as a Ranger pro.

Kapiton won’t be fishing from the front of the boat at this year’s Cup, but, at the rate he’s going, he’ll be there in a year or two.

Forrest Wood Sums It Up

The All-American is a big deal. Some of the biggest names in professional bass fishing have passed through the Walmart BFL ranks and its annual championship, and the tournament has become a showcase for tomorrow’s talent.

“You guys are all winners,” Ranger founder Forrest Wood told the attendees at the All-American’s awards banquet. “We started out with more than 30,000 fishermen at the beginning of the season, but less than a hundred [98] made it to the championship. Just getting to this point was quite an accomplishment in itself.”