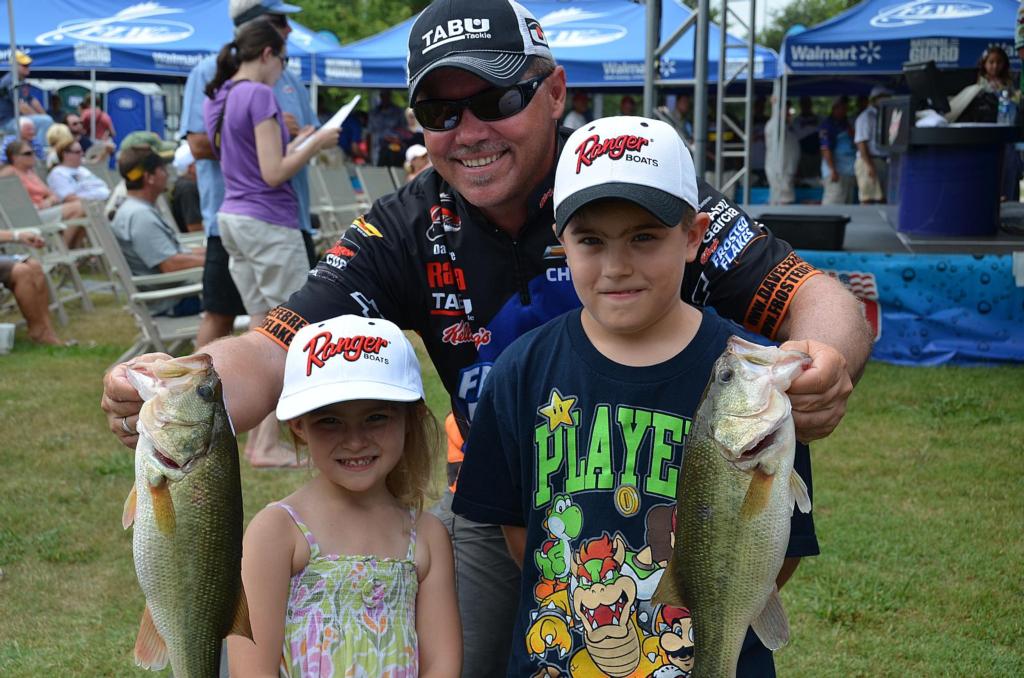 (Editor’s note: Veteran bass pro Dave Lefebre has agreed to take time to share his insights into each FLW Tour event of the 2011 season. After every event, Lefebre will give his thoughts on tournament strategy, winning techniques and other behind-the-scenes stories/information that is compelling to our readers. The following blog represents his eighth installment. Lefebre ultimately finished the Pickwick Lake event in 71st place with a two-day total of 21 pounds, 14 ounces.)

It was great to be back in Florence, Ala. This is one of my absolute favorite fisheries because it is perfectly set up for big tournaments and it’s full of big fish. Everything is so convenient and there are not better fishing fans anywhere that I know of.

Boat draw on the first morning was critical for this tournament, the final event of the 2011 FLW Majors on Pickwick Lake. I drew boat number 41 on day one, which for me wasn’t all that bad, but when I arrived at my best spot, someone else was already there. I couldn’t believe my luck. I came back five times throughout the day only to find him and another boat catching them like crazy. It was frustrating to say the least, but we all knew going into this one that crowding would be a big problem. I was happy to scrounge up 12 pounds, 3 ounces and stay somewhat alive by fishing a bunch of one-fish spots.

On day two, a respectable finish came down to a single fish that jumped off 10 feet from the boat. It was about 4 1/2 pounds and would have replaced a 1 1/2-pounder. It was the only big bite I had all day and I needed it badly. Unfortunately, that cost me a check and at least seven places in the AOY standings. I finally got to fish my best spot on day two, but the guy who was there on day one showed up and apparently felt he and his co-angler had the right to cast at my boat and my buoy. I thought that was the reason for the boat draw? Anyway, to make a long story short, it was a long, frustrating day. I heard countless stories of similar situations, mainly because we were so hemmed in and forced to fish on top of each other. I’m sure the miserable, severe heat didn’t help either.

Pickwick fished extra small because Wheeler Lake and Tennessee waters were off-limits. Besides that, all of the big schools of fish were literally on a dozen incredibly obvious places. It was weird; every school I found had four to 12 boats camped out on them at all times during the tournament … every single one! The guys who were able to adjust to the traffic and keep it together mentally, or those who had a special bait, were the ones who did better in the tournament.

Bait selection was very critical in this one and it all centered on the bait fish. I’ve never seen so much shad anywhere this time of the year – it actually looked like the fall season out there. The bass were totally keyed in on the bait, and although a few guys figured out a jig bite, for the most part, the bass did not want a jig as much as they normally do on this lake. Swimbaits, like the Berkley Hollow Belly, big spoons, top-waters like the Rapala Skitter Walk, and crankbaits did most of the damage this week for sure. I threw a shad DT 14 crankbait, a gizzard shad Berkley swimbait, and a new Kinami soft stick bait in pearl white.

During the two days, I witnessed many fish caught around me on a spoon, something I have yet to learn. My fellow Kellogg’s teammate, Jim Tutt caught a huge sack on day two on a shad-colored deep crankbait. I also talked to several others that made the top-20 cut who said a Rapala DT 16 was there main bait. Tutt also lost a couple 5-pounders that day, which could have given him the biggest limit of the whole derby. Glenn Browne flipped a dark-colored tube around shallow wood the whole event and did well. Randy Blauket told me a small chartreuse-and-black square bill crankbait and jig were his main baits. He also fished around wood, but said he mainly keyed on cypress trees.

I finished a dismal 71st place on one of my favorite lakes in the country – one which I’ve had a pile of top 10s. I’m disappointed for sure, but happy to have made another Forrest Wood Cup championship at least.

So there you have it – shad type baits were key around schooling fish. Most of the big schools were near creek channels on the upstream side of shallow humps. Most of the humps were shells or gravel and came up to 5 or 6 feet on top. The fish were normally between 8 and 12 feet and would come up feeding occasionally.

We are now finished with the regular FLW Tour Major season and looking forward to the Forrest Wood Cup, which is only about three weeks away. This Pickwick event was good practice for the severe heat for me as I’m sure Lake Ouachita, Ark., will be another scorcher. I’ll be there competing in my ninth consecutive Cup and looking for my first championship win. Until then, happy fishing everybody and stay cool!