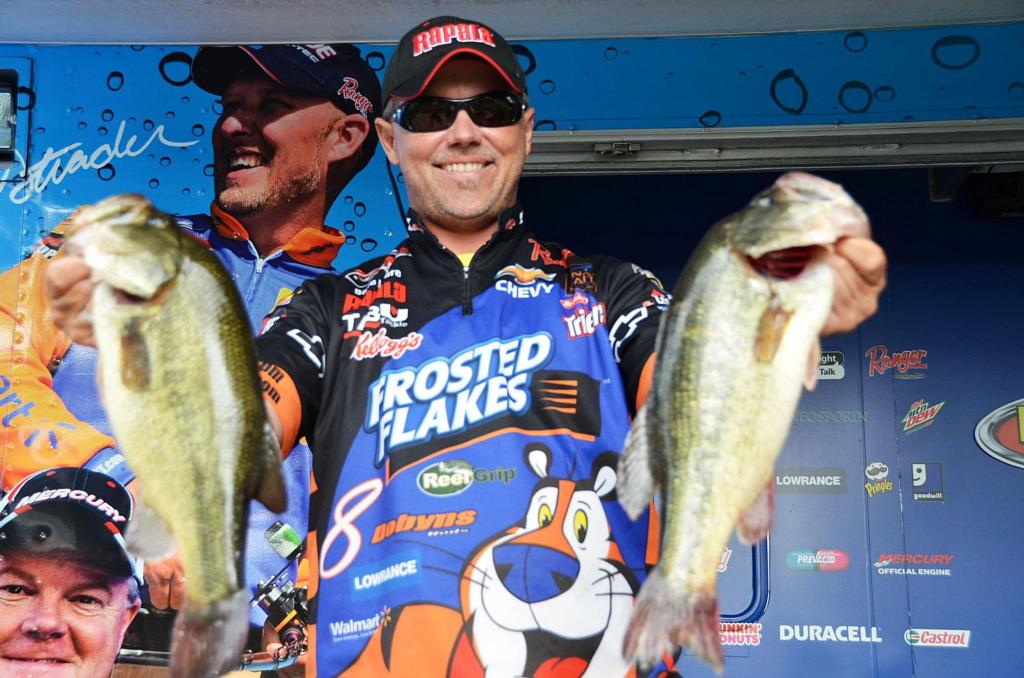 (Editor’s note: Veteran bass pro Dave Lefebre has agreed to take time to share his insights into each FLW Tour event of the 2012 season. After every event, Lefebre will give his thoughts on tournament strategy, winning techniques and other behind-the-scenes stories/information that is compelling to our readers. The following blog represents his first installment of the season. Lefebre ultimately finished the Lake Okeechobee event in 23rd place with a two-day total of 32 pounds, 8 ounces and walked away with $11,500 in winnings.)

It is hard to believe another season is now under way and the first event of 2012 is already in the books. Lake Okeechobee kicked off the FLW Tour Open season this past week and it was a slugfest as usual, for one guy at least.

I wish that one guy was me logically, but a few untimely blunders cost me a top-10 finish and a possible run at second place. I had an intimidating practice here this time around as all of the places I’ve done well in in the past were void of fish. Even worse, rain, wind, and cloud cover greeted our three-day practice period, which was my biggest setback. I like bright sun down here so I can see into the water and find beds – or fish that are spawning – but those conditions never came. I was forced to cover tons of water and basically start all over, pretending that I’ve never been to Okeechobee before. After checking old “memories” on day one, I totally cleared my GPS unit and spent the next two days in completely different areas of the huge lake – places I’d never been before. I flipped a Yamamoto 1-ounce jig and new Kinami Psycho Dad into reeds, pads, and anything else I could find while casting a Swimming Senko and Storm swimbait everywhere in between.

On the very last day of practice I finally found an area that seemed to hold some bigger fish. I shook off a bass that looked to be 6 pounds on a jig and caught a few other 3- to 4-pounders in the vicinity. More importantly, I developed some serious confidence in the big flipping jig. I also figured out that I could get many more bites by not using braided line and flipping with fluorocarbon instead. It was quite obvious the difference that the fluorocarbon line made for me, and I finally began to feel a little better about my chances in this event. I then checked another area about a mile away and caught a huge fish in the 8- to 10-pound range. It wound up eating my jig but thankfully, did not get hooked. Immediately after that, I put a big red waypoint on that spot. I decided that I was going to go south and fish that end of the lake for the first time in my many visits to the “Big O.”

On the first day of the tournament, I noticed that the heavy winds had made my best area quite a bit dirtier and, subsequently, I only had three fish at 1:00 p.m. So I left that area and went to that little place about a mile away were I had that big bite in practice. Craig Dowling was in there and soon after I arrived, Bryan Thrift, who ended the event in 6th place overall, also showed up. I talked to Bryan and he said he only had 6 pounds in his live well. I had three fish for about 8 pounds.

But that was all about to change.

Bryan came to the weigh-in with nearly 16 pounds. I caught several good fish in that area including one about 6 pounds and one about 4 pounds which gave me 161/2 pounds for day one which wasn’t too bad. As luck would have it, however, my co-angler caught the 8-pounder I had shook off two days earlier. He led the event on the co-angler side after day one with over 20 pounds. Obviously, that fish would have made a huge difference in the final outcome of this tournament for me.

I went back to that same area on day 2 and stuck it out all day. I managed another 16-pound limit, but lost a 5-pounder around noon that killed me. I ended up weighing a little 13 incher too so it was a very tough day on the job. But in hindsight, I’m very happy that I was able to catch what I did and start the year off with a solid 23rd-place finish. It could have been better for sure, but you can almost always say that. It also could have been much, much worse, so I’ll take it and move on to the next one.

The top five anglers fished a variety of different techniques, which is what I especially like about fishing this lake. My good friend, Randall Tharp took the victory on the “Big O” with an impressive 101-pound, 12-ounce total weight – which was more than 23 pounds greater than second-place finisher, John Cox. Tharp didn’t even need to catch a single fish on day 4 to seal the win if my math is correct, and that doesn’t happen very often at the tour level.

Randall fished around the mouth of Dyess ditch, while Cox stayed close to the takeoff area, in Clewiston. Jeremy York finished third by fishing in Uncle Joe’s canal, which was a little bizarre but it obviously worked out well for him. Another good friend, Art Ferguson captured fourth place by finding some big schooling fish in practice and then by staying in the rim canal on the final day out of the stiff winds. He credits his success here on his decision making throughout the four days. Fifth-place finisher, Brandon McMillan was fishing the same area and pattern as Randall, by punching thick matted vegetation with a big 1 1/2-ounce weight. Brandon, who won this event last year, suffered the loss of his father Jimmy recently, so it was great to see him do well again in Clewiston. The local support for Brandon was unbelievable during the weigh-ins each day. He’s a good kid, who I believe has a great future in this sport if he chooses to make a run at it.

Randall and Sara Tharp just left our camper this Monday morning and I asked Randy to tell me something he didn’t confess to any writers. The one thing he told me was that it was very important not to touch his trolling motor anywhere near the matt he was fishing. He would get upwind from the matt and drift up to it and quietly ease his Power Poles down once he got close. Being quiet around these Florida bass has always been a major key to success and something I too have always tried take full advantage of. Stealth obviously played a big part in Randall’s win this week as well. The other thing he mentioned was how a Tabu swimming jig cast between the mats accounted for at least three of the bass he weighed in during the four days. Though he did not need any of those particular fish to win, he did need every one of them to break the 100-pound mark, which he did by only 1 pound, 12 ounces. Besides winning, that was one of the goals he set for himself this tournament. Great job Tharp, but now it’s time to get back to playing Baggo!

Anne and I are contemplating staying in Florida until the official practice period begins on Lake Hartwell in three weeks. Winter in Pennsylvania doesn’t seem too appealing when we could be playing on the beach in 80-degree temperatures instead. Either way, I will talk to you all after the first FLW Tour Major on Lake Hartwell, S.C. I made the top-10 there last season so I can’t wait to go back. In the meantime, you can follow me on Facebook!