Back Story: The Pumpkin Man 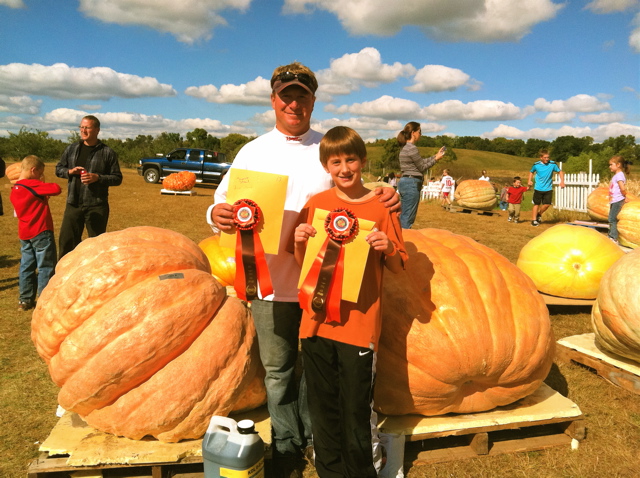 Scott and son Cole show off their ribbons they won for growing some mammoth pumpkins.
April 17, 2012 • MLF • Angler Columns

Steil is a competitive pumpkin grower, but we’re not talking about the kind you carve up for Halloween jack-o’-lanterns. We’re talking about the bad boys that are so big and fat that you can’t get your arms around them and that require a front-end loader to get them on a truck. We’re talking about pumpkins that practically swell up in front of your eyes during the peak of summer before attaining a size that approaches one ton.

Steil is good at growing pumpkins of that bulk, though he didn’t set out to be any sort of expert. Blame it on his lifelong interest in gardening, his drive to compete, and the area where he lives. The upper Midwest – especially Wisconsin and Minnesota, which Steil calls home – is pumpkin central as far as producing the largest fruit. Summers that aren’t too hot, good soil enriched with glacier-deposited minerals and a growing season long enough to let pumpkins reach their full potential are the magic ingredients.

In pumpkin country, instead of fishing terminology such as “unders” or “slobs,” the words and terms that count are “heavy hitters” (the guys who consistently grow large pumpkins), “good one going” (for a pumpkin that shows potential), and “big and heavy” (a pumpkin that grows large and heavy, which are terms that are not always mutually inclusive).

Steil became intrigued with raising supersize pumpkins a couple of years ago when he watched a local news report about the top grower in Minnesota who lived about 40 miles from Steil’s home in Richmond. The report made Steil’s green thumb twitch, and his competitive juices flow. “I can grow pumpkins that big,” he thought, and then proceeded to prove it.

Steil has entered a few contests and even won second place in a Minnesota event last year. The main prize he’s after next is the blue ribbon of the Harvest Festival in Stillwater, Minn., in October. He placed in the top 10 in that contest last year with a 1,023-pounder, and it served to whet his appetite for more. Lest anyone thinks that pumpkin growers such as Steil are just in it for kicks, an event sanctioned by the Great Pumpkin Commonwealth – the national sanctioning body and records keeper – might award a grand prize of $5,000 for the heaviest pumpkin. The Eldorado of pumpkin weigh-offs is an annual contest in Half Moon Bay, Calif., that pays $6 per pound to the grower of the winning entry.

“I’ve really gotten into it,” says Steil of his passion for pumpkins. “It’s a science; there’s a lot of technology that goes into it, like fishing for walleyes. I’ve got my Ranger, my Evinrude, my Minn Kota and all my fishing gear, and how I use them all together decides my chances in a tournament. When you’re growing pumpkins, you also have to have all the right tools and know how to use them together.” 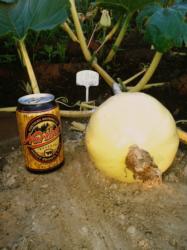 Pumpkin season begins a lot earlier than walleye tournament season for Steil. First, he plants pumpkin seeds in a rich soil mixture and incubates the 4-inch pots under a growing light until the young plants can be transplanted to the outside. There, each plant has its own small greenhouse with soil-heating coils around it to keep the dirt at about 74 degrees, which is a temperature conducive to good growth.

“Basically, what I do is start the seeds with the intention of transplanting them within a week so the roots don’t get crowded in the pot. That might stunt the plants,” says Steil. “I need the vines to be blooming and pollinated by July 1. If that doesn’t happen, I might as well pull up the plant because there’s not going to be enough time for pumpkins to mature to their full potential.” 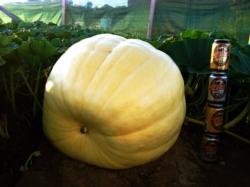 The growing season is tricky. Steil fertilizes his plants with various concoctions that are mostly natural. As might be expected, fish are his favorite fertilizer. When the pumpkins form, they grow on a bed of coarse sand that inhibits rot, but also allows the fruit to grow without constriction.

“Once a pumpkin gets going, it might grow 40 to 45 pounds a day for 30 days or so,” notes Steil. “You can literally see the sand get pushed up as the pumpkin expands.”

Between pollination and the fall harvest, however, pumpkins are in constant peril. Too much rain and the fruit might develop rot or soft spots, which eliminates them from competition. Too little rain and pumpkins won’t get as fat and heavy as they might otherwise. The biggest danger of all, according to Steil, is hail. In the summer, the plummeting ice missiles might drill holes in the soft skin of pumpkins or otherwise scuff them. Though pumpkins aren’t going to win any beauty contests, they must be in pristine condition or judges will toss them out.

“Unfortunately, some of my best plants and pumpkins have been damaged by hail the last couple of summers,” says Steil.

It figures; pumpkins are big orange targets. Steil’s biggest specimen last year was 16 feet in girth. Steil always thins out pumpkins to one potential prizewinner per vine, and the single sprawling plant it’s attached to might cover an area of 900 square feet. At summer’s end, Steil winnows his keepers to three or four pumpkins. Win, lose or draw, Steil saves the seeds of the biggest for the next year’s crop, and he also has plenty of makings for holiday pies.

Because the growing season is also the National Guard FLW Walleye Tour season, Steil enlists the help of his wife Lisa, son Cole and father Gary to tend the pumpkins while he’s gone. In fact, growing pumpkins is a family hobby with the Steils; a pumpkin that Cole grew placed third in the same contest where his dad finished second. 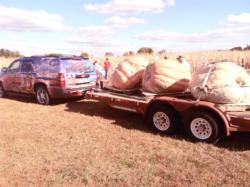 If any of the few pumpkins that Steil grows reach competitive size by summer’s end, he cuts the stem of the biggest, loads it on a flatbed truck with a special strap cradle that doesn’t damage the behemoths. Then it’s off to the nearest pumpkin contest.

“I hope to grow three pumpkins that each weigh at least 1,500 pounds,” says Steil. “I feel good about it because we had a mild winter and a warm spring. This time last year I was ice fishing. This year I’m running around in my boat and wearing a tee shirt. We’re going to have a longer growing season and that means getting plants off to a good start.”

Steil has won two National Guard FLW walleye tournaments, and finished in the top 10 seven times. On the water, he wants to win an angler of the year title. In the garden, he wants to break the current world record of 1,818 pounds that was set last year in southern Ontario. Given the near-perfect conditions that characterize the Minnesota spring, this could be the year to achieve his pumpkin-growing goal. 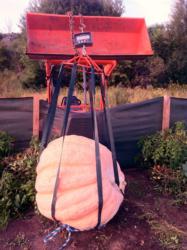 “Everyone’s goal is to try to break the world record. It’s only a year old,” says Steil. “Two years ago, Chris Stevens of Wisconsin broke the world record with 1,810 pounds. So the last two years the record has been broken. Guys are learning a lot of new techniques and figuring things out. And the way the weather’s been, I wouldn’t be surprised if this fall somebody doesn’t weigh in a 2,000-pounder.”

The next National Guard FLW Tour angler of the year, or the world record pumpkin grower – either title would be quite a catch for Steil.