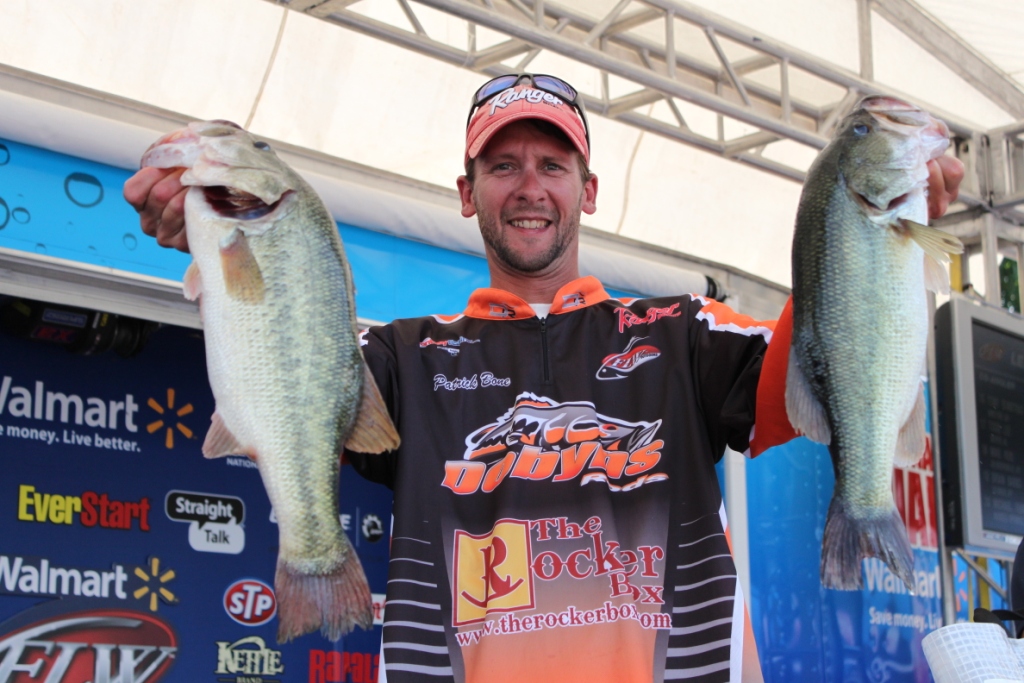 Patrick Bone sets himself up on day 1 to make a run at his second Major title as a co-angler this year. Photo by Shaye Baker. Angler: Patrick Bone.
From shoeing horses to running with the pros
January 14, 2014 • Colin Moore • Angler Columns

A guy walks into a blacksmith’s shop and starts nosing around. The blacksmith sees him out of the corner of his eye, but doesn’t pay much attention to him. Before long it becomes obvious that the visitor is a know-it-all, as he feels compelled to tell the blacksmith the best way to do this or that.

The blacksmith ignores the man. He’s busy making horseshoes. The visitor eventually wanders over to the anvil, where a horseshoe the blacksmith just finished is cooling off.

The nosey intruder suddenly picks up the horseshoe, and just as quickly drops it.

“Nah,” says the know-it-all, trying to preserve some of his bravado. “It just don’t take me long to look at a horseshoe.”

Patrick Bone has heard all such blacksmith jokes, because he is one or, more accurately, a farrier. The difference between the two basically is that a blacksmith makes things from iron – including horseshoes – while a farrier’s main occupation is nailing prefabricated shoes to a horse’s hooves to protect them. He might make or reshape shoes along the way, but keeping horses road-ready and their feet healthy is his main concern.

Bone’s interest in shoeing horses was an offshoot of his days competing in rodeos back home in Georgia. He’s made a good living from it, too, but after 17 years in the business, he’s ready to forsake his farrier tools completely and become a full-time bass pro. Bone, who hails from Cleveland, Ga., is off to a good start. 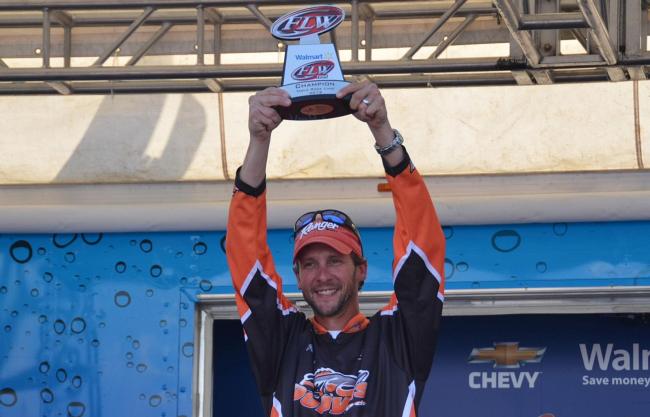 As a Walmart FLW Tour co-angler the past three years, Bone has accumulated more than $40,000 in earnings. He’s also earned almost $25,000 more fishing the Walmart BFL series – including two All-Americans – and other FLW circuits. His biggest win to date, however, came on the pro side at a B.A.S.S. Open on Douglas Lake last year. Not only did it increase Bone’s bank account substantially and earn him a berth in the 2014 Bassmaster Classic, but his win at Douglas over more experienced pros did wonders for Bone’s self-confidence.

Bone now has switched to the pro side in the Walmart FLW Tour, and his first test will come at Lake Okeechobee in February. He’ll be fishing out of a Ranger Z119 pushed by a Mercury 225-horsepower engine.

“I’m looking forward to it,” says Bone, 34. “I’ve always been a very competitive person and I want to be considered among the best at the top level. So far it’s all worked out pretty good.”

For various reasons, Bone didn’t fish all the FLW Tour events the previous two years. His last full season came in 2011, when he collected almost $16,000 fishing out of the back of the boat and placed third in the Co-angler-of-the-Year running.

“It came down to the last day of the last tournament that year, which was at Pickwick,” recalls Bone, who rates jigs and square-bills as his favorite lures. “I had a 38-point lead and all I needed was 2 pounds and 14 ounces to lock it up. I bombed. It was a crazy deal; the pressure didn’t get to me, basically it just wasn’t my time and I wasn’t on any fish. I had an awesome year otherwise. I never practiced for any event – just showed up and went fishing – and made the top 20 in four of the six tournaments.”

Bone is convinced that his competitive nature plays off the skill level of his competitors. That being the case, he had plenty of inspiration in 2011. Spencer Shuffield won Co-Angler of the Year then, and Keeton Blaylock was second. Co-angler stalwarts Mike Helton and Richard Peek rounded out the top five. Of those, Bone, Shuffield and Peek have now gone pro.

One of the more obvious advantages of interning as a co-angler is that it enables a fisherman to study the techniques and strategies of more experienced pros who might specialize in various approaches. Although Bone grew up fishing the deep waters of Lake Lanier with his mentor and fellow farrier Doug Workman and his brother, the late Daniel Workman, his years spent fishing out of the back of a boat have provided the tools to make him a formidable pro.

He fished his first tournament out of the back of Daniel Workman’s boat in 2000, but Bone has been a dedicated bass fisherman since he was 10 and was running his own boat soon after his 18th birthday. In his formative years, spotted bass on deep structure were the usual targets. 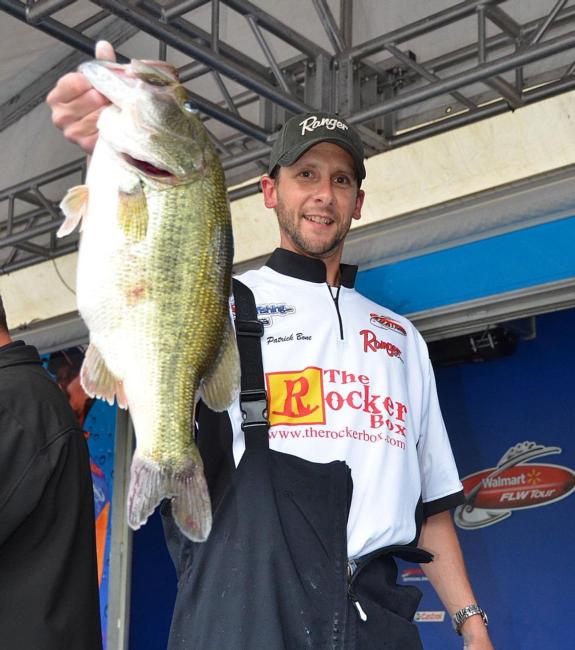 “I’m more familiar with fishing offshore, but I caught most of my fish at Douglas out of water about 8-feet deep,” notes the Georgia pro. “In fact, my favorite thing is to fish docks – the tighter the better. I really like to take them apart. I’m fairly versatile, though I wouldn’t say that’s my best trait. I think it’s my work ethic that I apply to what I want to do in life. In the farrier business, I went a long way fast. I passed the certification level when I was 20 and that’s pretty unusual.

“The biggest thing is that I have the same outlook on everything. Being a farrier and making a living for your family (Bone has a wife and son) is hard work. I’ve developed a good work ethic that carries over to my fishing.”

If a survey of all the top FLW pros over the years were made, no doubt a strong work ethic would be as one of the common denominators that helped the standouts reach the stars. What wouldn’t show up, under the header of career background, is professional farrier. In that at least, Bone is one of a kind.