More Than a Fisherman 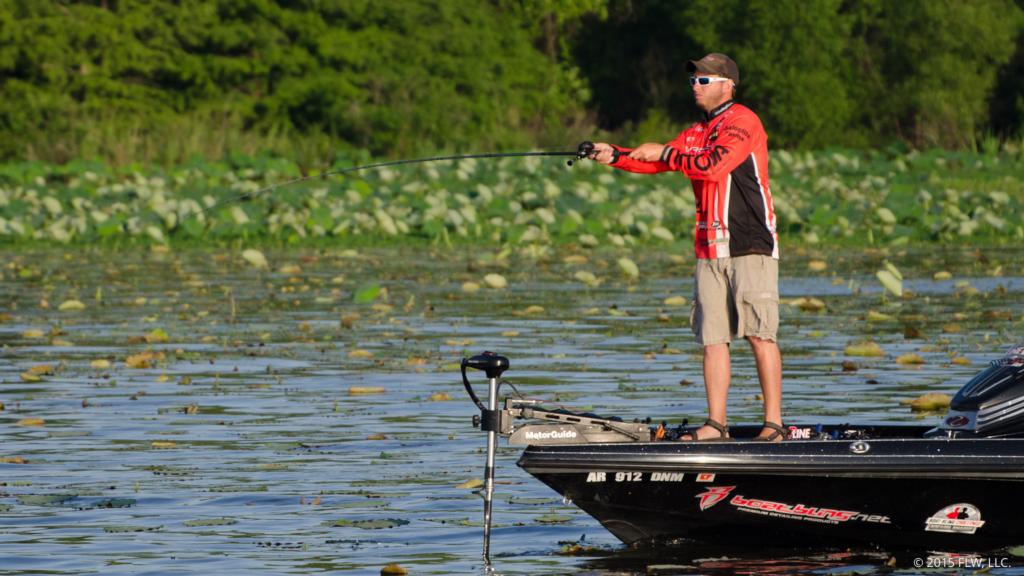 Cody Kelley tried to pluck an early bite from the pads near the state park. Photo by Kyle Wood.
It’s not just the fishing that’s important when you become a professional angler
July 6, 2015 • Cody Kelley • Angler Columns

The competitive fishing world is a small one, and when narrowed down to the competitive bass fishing world, it is even smaller in the grand scheme of things. This, of course, isn’t to say that this small group doesn’t have an absolutely huge impact. It does.

The flashy trucks, LED boat lights and celebratory screams whenever a fish is hoisted over the gunwale of a boat influence the fans that are watching. I’m not knocking any of this, because let’s face it, who doesn’t like to see a 5-pounder get boat-flipped by an excited pro?

To be completely honest, though, those things were about all that I saw when I first began pursuing my goal to reach the Walmart FLW Tour. In my mind, a professional angler’s day went something like this: Wake up, fish, weigh in, interview, re-tie and get some sleep before day two (and hopefully days three and four). For a select few, this might be the case, however, for most of us it isn’t even close. There’s so much more that anglers do besides fish.

Something that truly sets professional bass fishing apart from any other sport is the accessibility to the athletes. Anyone can walk right up to any of the anglers in the mornings or at weigh-ins. With this type of “open” format comes something great: the ability to do more than catch and weigh fish.

As anglers in the public eye we are instantly given an opportunity to help, influence and motivate thousands of people. As an example, this year I have been blessed to have a chance to travel the country representing Special Olympics of Arkansas to raise awareness for all of the absolutely great things that the organization does. Getting to work beside the athletes is truly inspirational and something that has completely changed my outlook on day-to-day life. Working with a group like Special Olympics is only one way to use the platform that FLW provides for giving back.

Everywhere we go, there are kids soaking in every word spoken and every action of the FLW anglers. This goes for all anglers. It doesn’t matter if you are a High School Fishing angler or a full-time Tour pro. When you put on your tournament jersey for the day, you instantly have the ability to influence tomorrow’s fishermen.

I believe that the rapid growth of the sport is an amazing thing, but I think that it is important for all of us to realize the effect we can have on the younger crowd just by taking a second to talk with kids. Maybe it’s a quick high five at the boat ramp, or stopping and asking what was the biggest bass he or she ever weighed (90 percent of the time they swear it was bigger than Dad’s).

I know that many of you reading this were inspired by an older angler when you were younger. I know I was. Maybe this person wasn’t a professional, or even a tournament angler, but that didn’t matter. When you’re young and see someone older catching fish, he seems like the best on the lake, and you instantly want to be just like that person.

FLW does a fantastic job of connecting the anglers with the communities we visit while we are at events. Just having a few anglers take the time to go speak with kids at a local school has a lasting impact. I can’t imagine how many people could be influenced if all FLW members began taking a little time to reach out to their communities.

Anyone who has ever volunteered with an organization definitely knows that there are countless ways to help. Call your local Game and Fish group to find out where fishing derbies are being held. Stop by for an hour to interact with some of the contestants. Many high schools have fishing clubs now and are more than happy to have a tournament angler come and speak with the students about lessons learned while competing. There is no doubt that a small amount of time given back to the community always has an impact greater than what we could imagine.

So as this season goes on and we as competitive anglers focus on winning tournaments, let us not forget about who and what made us realize that we could achieve our goals in the first place. Take that little extra time to talk with kids, spectators or the newcomers. I promise that it all comes back to you and the industry in the end. Who knows, maybe that kid you gave that high five to will be tied up beside you at the dock one day, and that’s when you’ll know that it really was all worth it, and you’ll know you were more than just a fisherman.