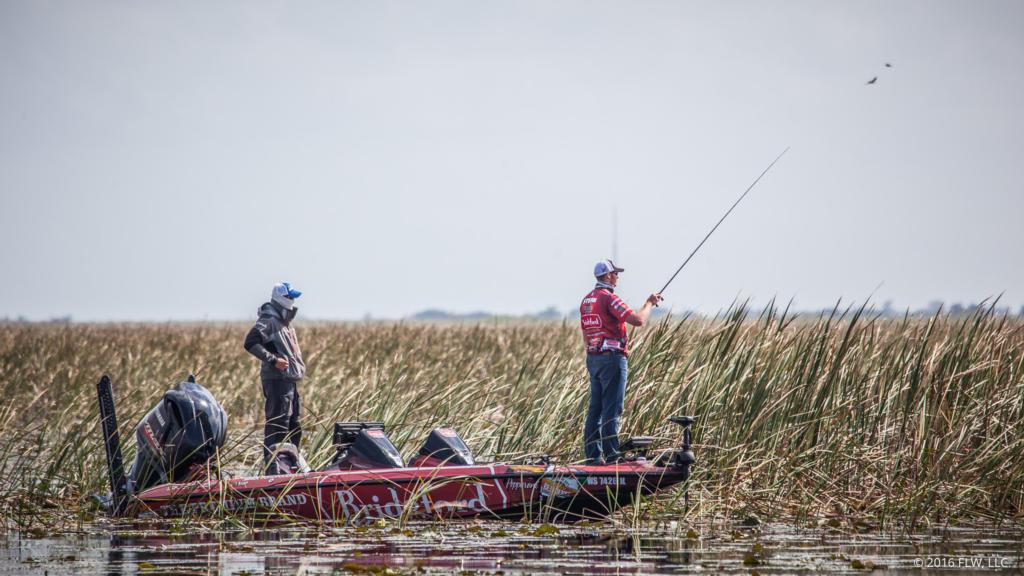 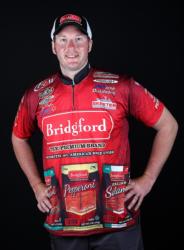 After fishing three tournaments on Lake Okeechobee over the past three years, I swore to myself that I would never fish anywhere on Okeechobee other than the Monkey Box area again. PERIOD!

This area routinely produces the most consistent bags and more money finishes than any other area on the lake. Naturally, when I saw Lake Okeechobee scheduled for the 2016 Walmart FLW Tour, I figured I knew where I needed to fish to get out of Florida with a decent finish. What I didn’t expect was the curveball Mother Nature would throw at us prior to the start of practice.

All of Florida had been getting pounded with rain for the weeks prior to the event, which raised Lake Okeechobee’s water level by several feet. This influx of water changed the entire lake and gave it a completely new feel. Most of the hay grass, lily pads and hydrilla were submerged. The cattails and bulrushes had 5 to 6 feet of water on them. There were also significant current areas available to fish.

I had already made up my mind to spend my entire practice in the Monkey Box area, so that’s where I started, spending almost the entire first day dissecting areas that had always been productive. Yet, I found little success. 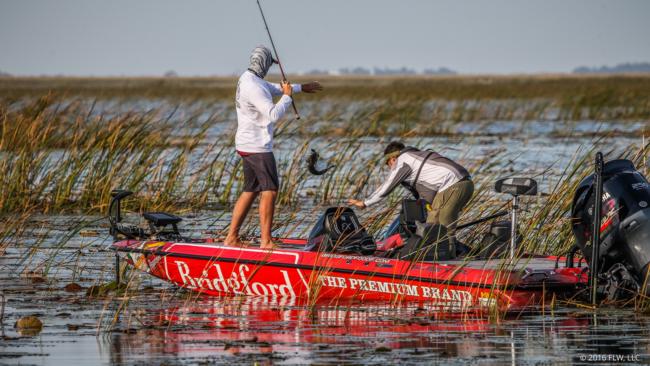 Usually, I can fish through the hydrilla flats with a Dirty Jigs Swim Jig and catch fish, plus there are mats to punch, but this year was different. Since the hydrilla was almost completely submerged there were very few mats, and the weedlines created by edges or grass transitions were not visible. Usually you can still “see” weedlines in submerged grass with today’s electronics, but because there was significant weed growth throughout these flats the edges were harder to decipher on the depth finder. Following a weedline was quite difficult.

The extra water also made it much harder to work baits deeper into the grass and made it more difficult to get bass that were buried deep to react to a moving bait fished 5 feet above their heads. These were not ideal fishing conditions if you didn’t have the exact location of where the fish were holding. The lack of visible weed cover also meant spending more time fan-casting, which is less efficient than making high-percentage casts directly to a weedline or hydrilla mat.

After spinning my wheels for the majority of my first practice day, I decided to call an audible I never imagined doing. I decided to go south.

I made this move with about an hour of fishing time left and figured that if I got down there and disliked it that I could forget about it and would only lose a little bit of practice time. In hindsight, this was the decision that saved my tournament. My practice partner Mark Fisher and I caught six or seven fish in the last hour of daylight, which was encouraging after struggling all day up north. None of the fish were big, but it was enough to make me want to spend another day of practice down south.

I went back to the South Bay area on the second day of practice and immediately started catching fish on a Dirty Jigs Swim Jig. The only problem is that they were all male fish with only a few approaching the 3-pound mark. One thing that did stand out was that the bites normally came in groups. I’d go awhile without a bite, but when I did get bit it seemed like I could fan-cast that area and catch several more.

The male bass were using these areas to spawn and grouping up in them. Plus, it seems like in Florida if you can find the male bass the females usually aren’t too far away. Knowing this, I picked up a Dirty Jigs No-Jack Punchin’ Jig and moved to the heaviest cover that was closest to the areas where I was getting consistent bites from the males. After fishing through bulrush beds, cattail clumps, floating debris, lily pads and thick hayfields I noticed that my pitching bites were all coming from the cattail clumps, and those fish were significantly better quality.

The flipping bite wasn’t nearly as consistent as the swim-jig bite, but the fish I was getting to bite were averaging 3 pounds, and I caught one close to 7 pounds. There were prespawn and postspawn females mixed in. I ended the second day of practice with one main area that produced a lot of quality bites. I felt a lot better about my practice.

I spent the last day of practice trying to find more areas to flip and found one other good concentration of big fish. I had two fish close to 6 pounds and several other quality bites in this area.

Unfortunately, it just so happened that Bradley Hallman found these same fish and ended up winning the tournament off this spot. I had a middle-of-the-road boat draw and had every intention to start in this spot, but there were already three boats on it by the time I got there.

I audibled and went to the area I found on the second practice day. This wasn’t a bad decision as it produced enough fish over three days to result in my 13th-place finish in the tournament, and I got out of Florida with a good start to the 2016 FLW Tour season.

This just shows that preconceived notions are never good, and that you should fish the moment. I know I’m not going to rule out the south end of Lake Okeechobee anymore.