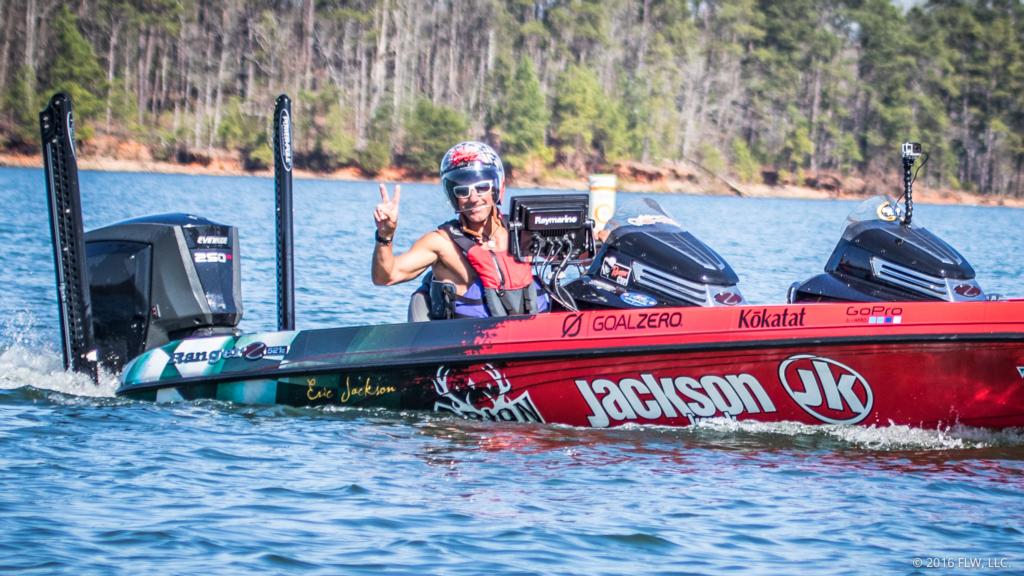 If I were to quickly summarize the lesson learned during my second tournament fishing as an angler in the Walmart FLW Tour, and the third tournament of my life on the front of a boat, it would sound like this:

“Learning and performing are two different things. In performing on tournament day, you will be fishing with your personal skills, but also with an equal amount of luck, of which, that luck can’t be ignored.  You can use your skills to try to keep the luck on your side, of course, but to ignore luck completely is to ignore a factor that plays a part of every cast.”

The story behind learning that is a little longer.

I am beginning to understand and formulate my own way of thinking about how luck and skill interact and how to make them both work towards my advantage on tournament day. Dealing with skill and luck during tournament fishing is like raising kids. They are with you at all times, and you never know just how they might command your attention throughout the day. Indulge me as I make this analogy, and then I’ll tell you what happened during the tournament that supports this idea.

Raising kids, as any parent knows, combines both luck and skill. The skill is in handing your child, being attentive, caring, teaching, and recognizing what they need. Luck is in the external influences, the random fall, the random mood swing, etc., that you can’t control. I believe tournament fishing is just like that, like raising a kid, and that lesson is going take some time to really appreciate and understand. You can do everything within your power to provide for, care for, and protect your child, but you’ll find that there are both positive and negative experiences that your child will experience, that are not of your doing. They happened because you put them in position to experience them (your skill set) but, you didn’t take any action to create that experience. A good example is taking your 4 year old to the playground to play with other kids, and during that playtime, they fall down and skin their knee. Or, during another play session, they meet their lifetime best friend. LUCK and SKILL working hand in hand – for or against your personal goals.

I learned this lesson, the lesson of luck, at Hartwell, and it is a great lesson to learn; and one that would drive me crazy if I didn’t come to terms with how it plays a part of being a pro fisherman. Here is how I came to this understanding, one that I will challenge constantly because I want maximum control over my personal standings at each tournament, which means finding ways to minimize the effect of bad luck and increase the effect of good luck (all while increasing my skill set, of course). 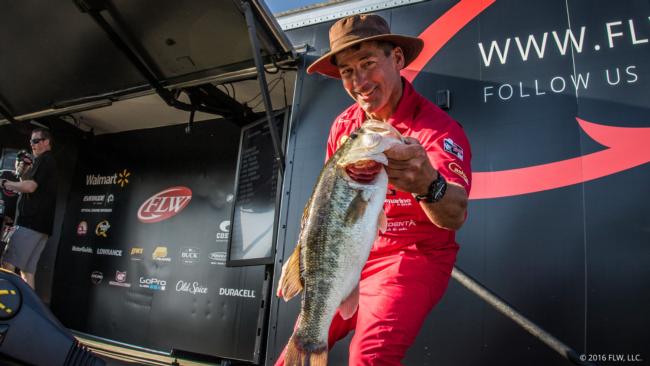 During the takeoff on day one, I was boat number 157 out of 167. We got to watch 156 boats take off and head down the lake. About 150 of them or more went left out of the boat ramp, heading south. I went north. I figured that either I knew something they didn’t know, or vice versa. We got to my first waypoint, way up a creek in dirty, shallow water and in the first 5 minutes I had a 4-pounder in the boat. I was happy with my decision. I caught another 3-pounder in the next 30 minutes and the day was starting off great. My co-angler didn’t have a bite yet, but was fishing well, it looked like to me. We had a dry period for a couple of hours, where I was catching some keepers, but they were barely a pound each. I had my limit by 10 a.m., but only for about 10 pounds. In the next few hours we ran around looking for big fish and we hit up a sweet cut out that had a great looking bank on it. Between the two of us we had three fish in about 50 yards and I was up to 12 pounds. Then Mike Smith, my co-angler, hooked into a BIG fish and fought it for 5 minutes on light line before breaking off under a tree. I was scheduled for a 5 p.m. check-in and it was only 3 p.m., I had some great waypoints left on another creek and felt that it would be easy to cull two or three of my small fish there. I was happy with my finding good fish, but not sure how lucky I was that my co-angler hooked into the big fish on the same bank I was fishing using the same color worm as I was using. I would remember this fish and go for it on day two, hoping it would be biting again.

The night before I proved I was a rookie once again by putting my new stash of Quaker State oil in my Evinrude G2 to top it off at the registration meeting. I got distracted during the process and didn’t remember to put my engine back up for the drive and dragged and bent the skeg on the lower unit. Several experienced people looked at it and agreed that it was fine for the day. On my final run with 2 hours of fishing left, my engine quit, and had error message #196 displaying on the keypad, which means lower unit failure. We had to use my trolling motor for 2 hours to get back to the check-in on time and luckily, we made it. Unlucky that it went out, lucky that we made it, unlucky that I lost 2 hours of good fishing time in the middle of a major tournament, lucky that we didn’t lose our fish by missing the check-in. I was really bummed for both myself and Mike, my co-angler, that we both lost this fishing time. Mike had two fish worth 4 pounds and I had a limit that weighed in at 12 pounds, putting me in 75th place on day one. 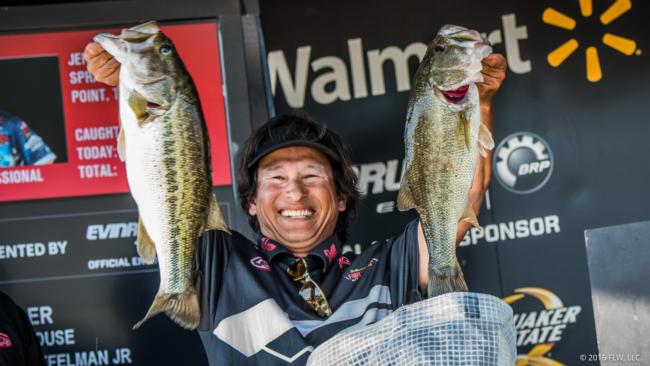 On day two I was paired with Yuki (Hiroyuki Watanabe), from Japan, and he was fired up for the day, but VERY nervous when I told him that we were going against the grain and heading north, when everyone else went south.  “Luckily” for me, he didn’t catch any fish on day one, so he was hopeful that something different might work for him.  We ran to the top of Twelve Mile Creek, and got into the super shallow water, about the color of a chocolate milkshake, with the deepest place being around 2 feet.

My 10th cast using a Strike King Tour Grade Naked Rage Blade (one of my favorite lures), I caught a nice 2 ½-pounder that was almost pure white from living in the dark water. Yuki suddenly looked relaxed and much happier because we were around fish in this place. A few minutes later I caught another 2-pounder on the same lure and Yuki switched up to a spinnerbait.   My confidence was high, as we were working our way downstream, in fairly heavy current for such a small creek and finding nice pockets, deep cuts, and other attractive spots just running the trolling motor along. Our first spot that looked like a great bedding location came up, and I carefully angled my boat in around the corner to assure that I got a few casts in before Yuki was squared up to it. It looked promising. After three casts covering this great looking pocket that was about 12-inches deep I turned the boat and started moving again.  Yuki threw his spinner bait right where I had, but about 6 inches to the right of it and BAM – 5-pounder. I couldn’t believe it. How did I miss that fish? Was that bad luck, or was I doing something wrong? I was happy for Yuki, who was jumping for joy, literally, and helped him land his fish.

The next 5 hours was more of the same. Yuki caught two more fish behind me to my one fish. He was catching more and bigger fish and was way head of me with weight even though we both had three fish. I decided to run to the spot where we caught four fish the day before, including a big fish that broke off my co-angler’s line. I told Yuki that this was a great spot, worth fishing, as there are big fish in here. Again, I carefully ran down the bank, slowly fishing my green pumpkin Ocho, while Yuki had the same, but wacky style. I didn’t get a bite and we were almost to the end of the bank when Yuki hooked into a big one, a really big one! A 7-pounder on light line with a spinning rod. I helped him get it into the boat, and now Yuki was fired up! I was happy for him, again, and glad we were pulling big fish in the boat, but of course questioning why he was catching them and not me. Luck or skill? What percentage was luck, what percentage was skill? What could I do different? My lures went by the big fish before his did. We were not sight-fishing, so the casts were to structure and cover. Was my lure just a little too far from the fish and his right on? That is also partly luck, partly skill. I can drop my lure where I want it on most casts, so can Yuki.    If we did the same day over again, would I have caught a couple of those big fish, as luck isn’t consistent? These questions are what I am trying to answer.

Differentiating between the luck and the skill factors in the fish I catch and the fish I don’t is difficult. Had Yuki not caught a 16-pound limit to my 8-pound, 4-fish bag, I might not be so fixated on this subject. I now believe that the key to becoming the best fisherman on Tour is in part to have the best sense about what is in your control, and what isn’t.

I was told about a study that shows professional fishing as the most stressful profession of any kind. It may or may not be accurate, but clearly if you let bad luck situations be confused with having poor skills in that area, you will spend your career adjusting and changing without ever finding lasting success. That will hurt anyone’s confidence and create unneeded stress. Learning what is luck and what is controllable during training and tournament days may be the single most important lesson in professional fishing. That is what has come from Lake Hartwell. I will apply this to tournament No. 3 at Beaver Lake.

An amazing adventure is unfolding for me. Can I become in fishing what I became in kayaking, or will I become an average, or below average pro? Anyone who knows me knows what I think, but the proof is in the results. I believe it will take me five years to get to the top, which is what it took me in whitewater kayaking. That sounds like a long time, but it really isn’t. It requires a steep learning curve, and a little good luck along the way. See you at Beaver Lake!