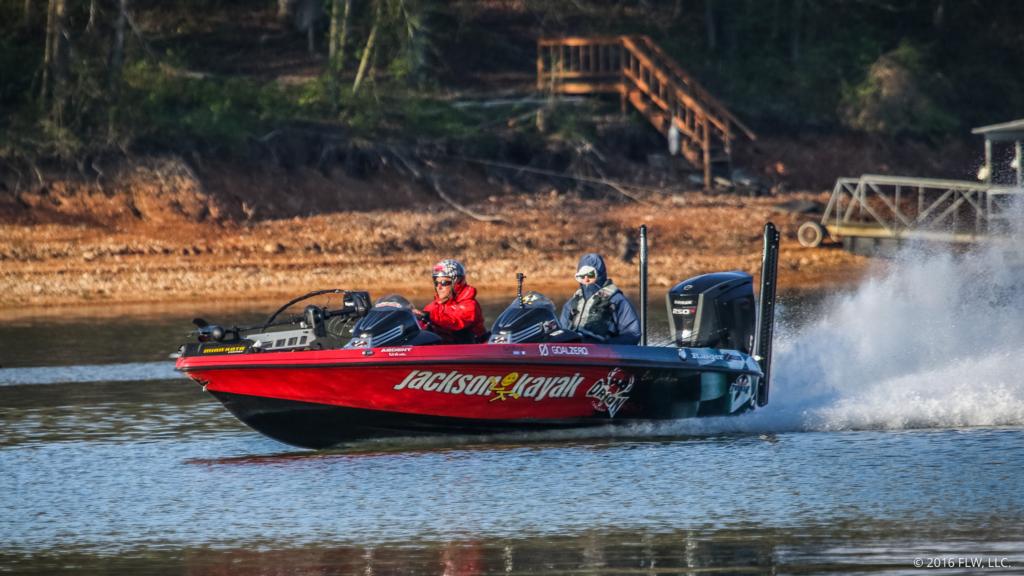 There were 166 pros at Beaver Lake, the third stop on the Walmart FLW Tour, which has now reached its halfway mark in 2016. I placed 166th, with only one fish over two days of competition.

If you have been following my season this year, you know a few things about me already. If not, a quick recap:

I spent the past few weeks since the Lake Hartwell event doing a variety of things, including getting more tournament experience in the B.A.S.S. Open on Smith Lake and then in the Adventure Kayak Fishing World Championships in Delacroix, La. As you might guess, my kayak-fishing tournament went well. I got second place with my teammate Steve Fisher. At the B.A.S.S. Open tournament I was 142nd out of 200 – another bottom-of-the-barrel finish.

As for Beaver Lake, I came a day late to training, driving straight from the kayak tournament, which was over on Saturday. Jackson Kayak sponsored the event, and we had a party Saturday night, where we “celebrated” in good style, and there was no way for me to start driving until the next morning.

After loading my kayaks on the RV and hitching up the bass boat I drove until 1 a.m. Sunday night to get to Beaver Lake. The next morning I woke to fish at 6 a.m. In the hustle of travel I had apparently forgotten to charge my boat up, and it was nearly dead. I had to stop fishing and charge the batteries by 8 a.m. I got a few hours of practice in on Monday, and then a full day on Tuesday.

To make matters worse, I had flipped over in my kayak in Louisiana – yes, the world champion whitewater kayaker was a little careless and flipped in flat water – while standing, landing a redfish, and playing with a camera and a sail on my kayak. I dumped three rods, one Power-Pole Micro stake, three GoPro cameras and an iPhone in the drink. Not having an iPhone for my drive to Beaver Lake, and then not having a way to talk to other pros such as Scott Canterbury, Wesley Strader, Bill McDonald, Charlie Ingram, Barry Wilson, Brad Knight and others who could have, and would have, given me some tips for training, meant I was on my own, in the dark, with no Google Earth and without my usual tools for preparation. I’m not making excuses, but unfortunate incidents like that often compound themselves, and that’s what happened in the tournament. “A cascade of events,” it is sometimes called.

I fished way up the War Eagle Creek, and catching largemouths was easy. I could find them and catch them all day, but they ranged from 10 to 14 inches long. I brought in zero keepers on day one. On day two I fished more in the main lake for largemouths and still didn’t find a keeper all day long until my last cast using a Strike King KVD crankbait. I caught a 15-inch spot to put me on the board with 60 seconds to go before check-in.

To summarize: I came late to training, was unprepared, and then trained without my full arsenal of tools and with not enough time to figure it out. Not to mention, I was too tired from the last tournament and driving to be at my best.

One of two things happens to people competing in events with high personal stakes when they perform so badly that anyone who pays attention to it can only say “sorry,” or wonder what you are doing competing in that sport if you are so bad at it.

You can internalize the result and have the place you finish define you in some way. You might think things like, “Maybe I am not cut out for this,” “People are laughing at me,” “I am a joke.”

Or you can distance yourself from the result and focus on the big picture of WHO you are WHAT you did, WHERE you are going and WHY you are doing what you are doing.

Is your persona the position you finish in a competition? No! Brad Knight won the Forest Wood Cup last year, but he hasn’t won a tournament yet this season. Brad Knight is the person Brad Knight decides to be, and how he acts in his public and private life. His results in competition add or take away from his persona only as much as he allows them. He represents himself with class at every event, win or lose, and does a great job with his wife and daughter at those events. That is what makes him a winner every day. It is what will give him longevity and a fun life. His results are generally impressive, but nobody in fishing has been able to win consistently, and anyone whose happiness is dependent on results will have more bad days than good ones.

Who are you? You are yourself, the person you decide to be, and NOTHING shows who you really are more than the day you really lose. Every angler who wins seems happy and like he has it all together. When you want to get to know someone quickly, watch how he acts on his worst day. That is the real person with no makeup on.

For me, getting last place was NEEDED to know with 100 percent certainty that I really want to be a pro bass fisherman on the elite level with the Walmart FLW Tour. By getting last, I had nobody saying “good job” (other than Bill Taylor, and bless his heart for doing so), nobody who wanted to interview me about my equipment choices, my techniques, etc. I was deadweight in the tournament. Therefore, all I had was my two days of fishing, where I caught about 30 fish and 29 of them were less than 15 inches long.

My wife, Kristine, gave me a big hug and said, “Don’t worry. This will take a little time, and there’s nowhere to go but up.” My 7-year-old son jumped on me and wanted to play roughhouse. My family finances were not improved and were challenged yet again, but everything will be fine on the home front. Kristine knows that I really want to be at the top of the tournament-fishing game and supports it.

Who I am is a happy, motivated person who is thrilled to have such a fun, mentally challenging sport to compete in and a family to share it with. I am good with that. I can go the distance with that being who I am.

Am I the biggest loser, the last place guy? No, I am not. Yes, I earned that position at this tournament, but that isn’t who I am. It is simply what happened at this moment in time.

Can you learn from finishing dead last? Absolutely.

I am more fired up for my next tournament than ever before – a good thing.

I know I can’t expect to perform well if I don’t train well.

I now know that I can go the distance in this sport because I am encouraged by my failure to work harder, not discouraged and wanting to quit after the worst performance I could have in a tournament.