The Importance of Fish Care While Culling 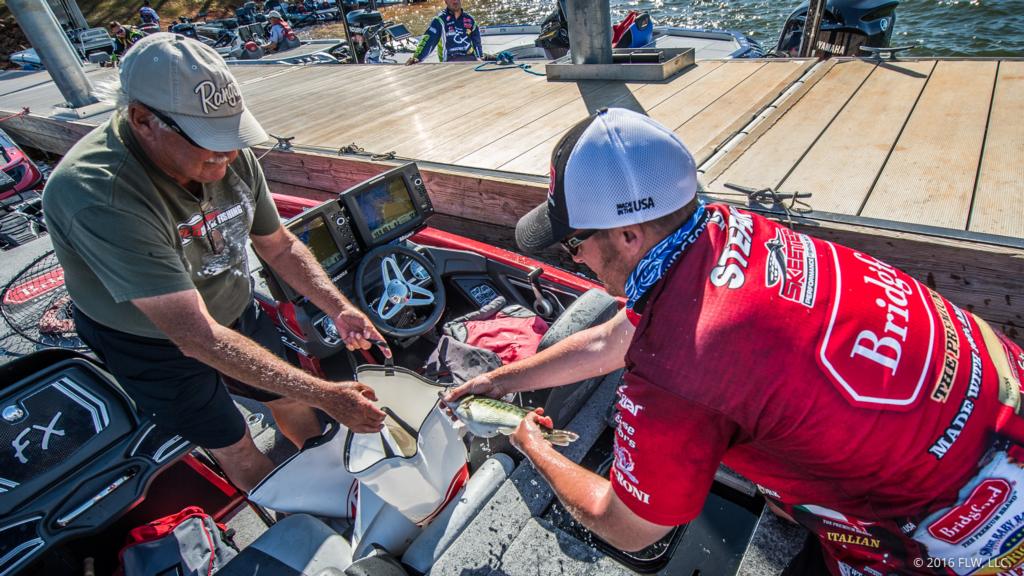 Fish care is important for all anglers, but particularly for tournament anglers, because it can easily change the outcome of a tournament if not taken seriously. In our sport ounces count, and poor fish handling can lead to dead fish and lost dollars.

As tournament anglers, we tend to handle fish the most when culling, and here lately I’ve seen anglers at all levels do some things while culling that don’t make sense to me.

I recently watched a high-level tournament in which an angler boated a giant bass, and the first thing he did was put a cull buoy in the fish. I’ve not seen scientific proof that says a hole in the fish’s mouth will cause death, but I can tell you from personal experience that cull buoys can increase the stress level on a fish while in the livewell and that they could lead to death. The buoyancy of the cull buoy puts pressure on the lower jaw of the mouth, which makes it harder for the fish to breathe through its gills. Also, cull buoys can get tangled and ultimately suffocate a bass if the situation is not caught soon enough.

I also routinely see anglers pull all of their fish out of the livewell and lay them on the floor of the boat to determine which fish are bigger. In my opinion there is never a need to do this. The point of cull buoys is to allow you to easily and quickly identify your smallest fish to avoid needing to pull all the fish out of the livewell. I’m not sure why anyone would do this, but I can tell you it puts a lot of additional stress on fish and can remove their protective slime coating, which may not lead to immediate death, but can definitely increase the potential for that fish to become susceptible to a virus that can cause delayed mortality and negatively affect a fishery’s population.

Everyone has an approach to culling, and there are lots of different cull systems for an angler to utilize. My approach is not necessarily the fastest way, but it’s what works best for me and applies minimal stress to the fish. I use the T-H Marine G-Force Conservation Cull Buoys. These buoys clip onto the jaw of the fish rather than puncturing the fish’s mouth. I choose not to put cull buoys onto my fish until I have caught my sixth fish. I do this because cull buoys can get tangled and suffocate one or more bass. This has happened to me, and I paid dearly. After I catch my sixth keeper I put cull buoys on just the smallest fish. For example, if I have two 4-pound bass and four more that are roughly 2 pounds each, I will put buoys on just those four and then weigh only those four since the other two are obviously bigger. After weighing each of the four bass I put buoys on, I record the weights on the Accu-Cull Culling System, which allows me to easily compare weights to see which is my smallest fish. If I have two fish that are about equal I can determine which is bigger with a quick use of the balance beam. Then I can return the smallest one to the lake.

I know one argument against doing it this way is that it takes more time to cull if you have to track down the fish in the livewell. Yes, this is true. It would be faster to put a cull buoy in the fish immediately after catching them. But I’d rather take a couple extra minutes after securing a limit than put additional stress on the fish, and there are usually only a few fish in the livewell that need a cull buoy anyway.

The penalty at the professional level for a dead fish is 4 ounces, which can lead to a loss of thousands of dollars and angler-of-the-year points that can prevent you from making the championship. Additionally, many tournaments do not allow you to cull a dead fish, which might affect an angler’s total weight by a lot more than the dead fish penalty itself. For these reasons, I take fish care seriously and do everything I can to keep them alive to be caught another day.