Teamwork is a key to avoiding the bad ones 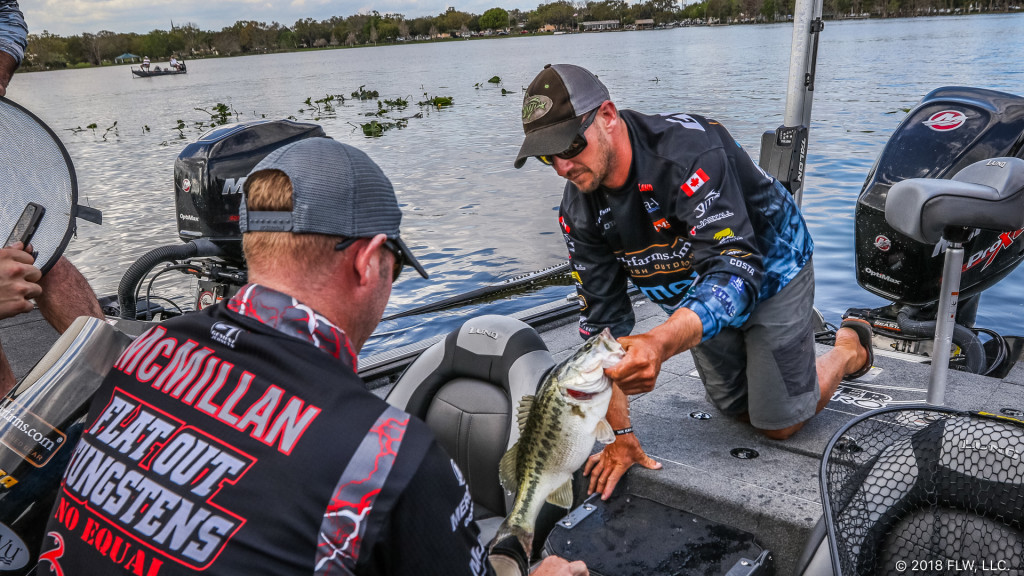 The other night, after we got done fishing at the Lake St. Clair FLW Tour event, Bradley Hallman and I shared a conversation over a couple of beers. We talked about how some pros share information, and the discussion kind of stuck with me. So, I thought I’d share more about it for my first blog.

There are a ton of people that share information on the FLW Tour, but a lot of guys don’t know how Gussy (Jeff Gustafson), me and my brother, Jared, make it work.

Hallman was really intrigued about it because he knows how I fish, and he knows we fish so much alike, yet every time he passes me I’ve got a spinning rod in my hands – and that’s definitely not our shared style. I guess I can see how that’d be confusing. The way I look at it, I’d rather get 10 grand than nothing. If I can get $125,000 for winning, I want it, but I’ve got to go home with $10,000 every time if I’m going to fish full time.

In my opinion, an angler can be a home-run hitter or a points guy. I’m not sure which is better, but I think in the long run it benefits Gussy and me to share our strengths so we can be more consistent.

For me, that’s all to do with Gussy. I can spend two and a half days doing my own thing, and when push comes to shove I know I have Gussy to fall back on to catch a limit. Lanier is a prime example. Hallman won, and he basically went for the home run. He found what he found, and it was awesome, and he was able to make it work for the win. I look for stuff like that every time. In the first day and a half of practice that was my whole game plan. I fished for largemouths for a day and a half at Lanier, and I did the same thing at Smith Lake, trying to win with them. Then when I sucked it up and couldn’t make it work I got a waypoint from Gussy and spent half a day looking for other stuff. I got a check at both of them.

Gussy always catches five bass, pretty much. He’s not Thrift, who’s done it like 88 times in a row (61 times, actually), but he’s pretty consistent about finding places where he can catch five in an hour. And my goal is to find places where I can catch a 4-pounder. It works well for both of us.

Finding someone to share info with isn’t easy. Our story goes back a few years, to when I met a guy from Gussy’s hometown by the name of Bryan Gustafson – same hometown, no relation. I met Gussy through him, and then in our rookie year we said “hi” and stuff in passing. When I started back on the Tour in ’16 I told Gussy he could come stay at the house for Okeechobee. He was really struggling on Okeechobee that year, and I gave him two or three spots, and he realized I wasn’t going to cheat him. Ever since then, we’ve been 100 percent.

It’s definitely a neat deal. I know a lot of people work together, but I think our relationship is different than others. It’s unique, because in three years I’ve never caught him lying to me. And I don’t know if anyone else who shares information can ever say that. In 20-plus tournaments we’ve fished with each other, he’s never led me astray.

It honestly really hasn’t benefited Gussy a lot yet. I can think of a few times it’s benefited him, but it’s a little more one-sided, in my opinion, because my style is more of a gamble and doesn’t pay off as much. But it will eventually. A lot of my making the Cup was due to Gussy, but a lot of not winning Angler of the Year is because I didn’t figure out enough stuff on my own. At Smith and Lanier, I had only two spots found. If I’d listened to Gussy right at the get-go and spent two days instead of half a day looking, I probably would have made a top 10 in one of those tournaments instead of just barely getting a check.

It’s almost clicked for both of us a few times, but something has just happened every time. At the Potomac last year I told him we had an area we could go and catch them; I just didn’t know it was going to be as good as it was. At Smith this year, after day two of practice, I was pretty convinced that I was going to win in this one spot. Then I ran it for, like, six or seven hours on Tuesday in practice and never had a bite. I had gotten on a little deal that was going away, and it was as good as anything else I’ve found in my career.

I don’t know Hallman’s situation, as far as who he talks to, but he’s a straight shooter. He’s a really good fisherman, and he’ll tell you he’s just as good at finishing 180th as he is at winning the tournament. But his mindset is the same as mine: Swing for the fences. The difference is, if I didn’t have Gussy, I might be right there with him in the hundreds sometimes.