All About the Jerky J 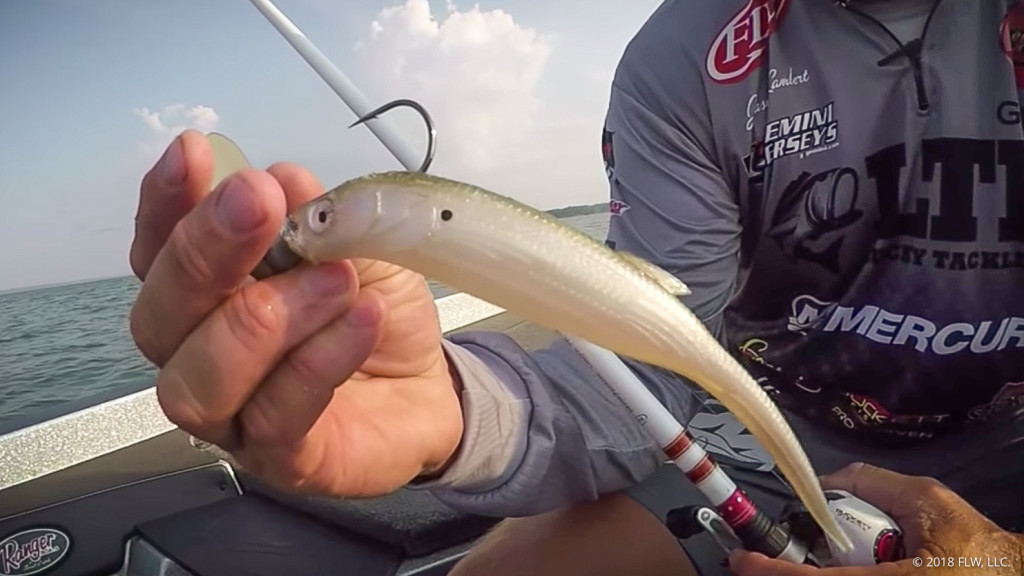 I’m torn about writing this blog. On the one hand, I want to tell everyone about how awesome the Castaic Jerky J is. On the other, it pains me to reveal information that I think gives me an advantage on the water. It’s a conundrum of sorts, I suppose, but since a lot of information about the Jerky J went public after the FLW Tour event I won on Kentucky Lake, I suppose now is the time to share a little more of the back story of the bait and how I’ve learned to incorporate it into my fishing.

I started fishing the Jerky J several years ago, but I really started figuring it out in about 2012 or 2013. I actually started fishing it on reference from Greg Lamb, one of my great friends over at Lake Chickamauga. Once I figured out how well it worked I started playing with different heads and presentations. As you’ve seen in previous stories with FLW, I’ve thrown the Jerky J on giant vibrating jigheads as well as a wobble head, and at one point or another I’ve used it in a variety of depths and for several techniques. The one technique that rose to the top and has been the biggest benefit to my career is throwing it on a wobble head when ledge fishing on the Tennessee River.

The main reason it works up and down the entire chain is the gizzard shad, which is the main meal for the Tennessee’s big offshore bass. The Jerky J, especially the Giant Jerky J, is an awesome gizzard imitator. It’s a 7-inch bait, and when paired with that wobble head it has an action that very closely mimics how they swim. It’s a little different than the traditional paddle-tail swimbaits that we’ve all come to know as “swimbaits,” but it is a swimbait nonetheless. 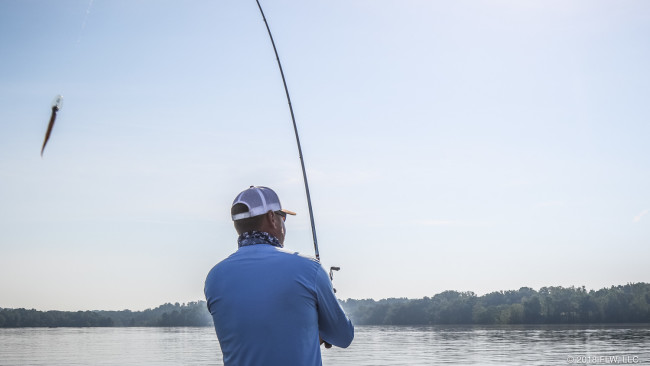 The straight tail on the Jerky J is less intrusive and less “noisy” than a paddle tail, and most of the action comes from the head. Therefore, it’s a subtle presentation, and to me is just a little something different that most bass fishermen didn’t throw.

You noticed I said “didn’t” in past tense, right? Ever since the Kentucky Lake FLW Tour event, most of the wobble heads in the country have been bought up, and Castaic has completely sold out of Jerky J stock in basically every retail outlet and warehouse.

The Jerky J has been a treasure for me for several years, and while others knew about it, most guys never got the details squared away. I took the preparation a little further by manipulating heads to work like I wanted and spending many hours casting in the pool to get the presentation just right. The result for me has been great success on the water, and the result for you will come at ICAST in July, where we’re going to introduce the new Castaic version of the wobble head to pair up with the Jerky J. I’ve been working on it for about two years, and while I’m excited, I’m once again torn because now everyone can buy the exact setup that I’ve been using in competition.

I should point out that I still fish a paddle-tail swimbait a lot. There are many situations where it is still king: finesse swimbait situations, spotted bass lakes, smallmouth lakes. I always revert back to a little 4-inch paddle tail in those scenarios. And almost all shallow-water swimbait fishing for me is done with a paddle-tail bait, whether on a jighead or a hook with a belly weight. I still always have a big paddle tail on the deck on the Tennessee River too, and I still throw it a lot. It has and will always have a place in my arsenal on the ledges.

But when that Jerky J bite happens (and it doesn’t always happen, contrary to popular belief), the bite can get crazy, as you saw back in May on Kentucky Lake.

Until next time, long live the Jerky J.