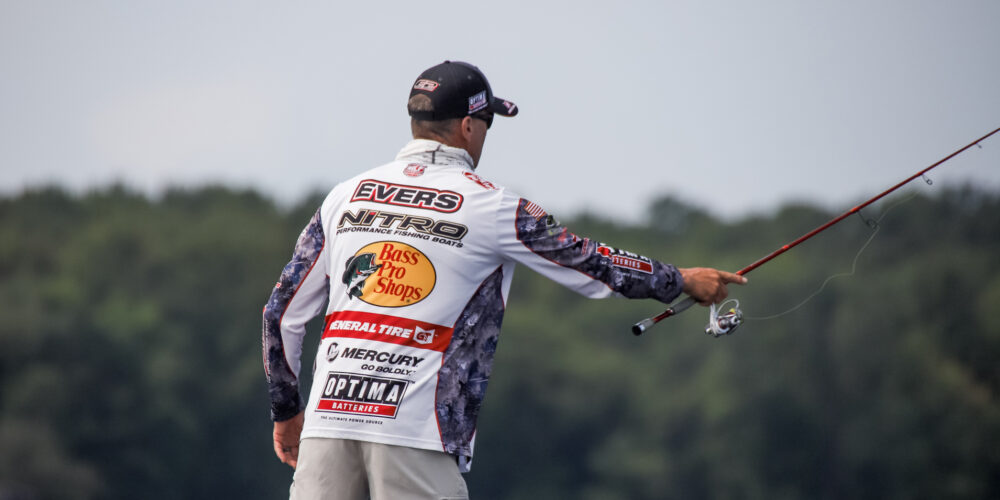 Late summer can be tough fishing for anybody, and that includes me.

There are a couple of things that we always talk about when thinking of hot weather bass – like punching heavy cover or targeting schools that are busting shad or looking for offshore brush – but none of those approaches are bulletproof. In late summer, they work some of the time, but nothing works all the time, and on those days when none of the regular patterns seem to be working, you’ll find me doing something pretty unusual.

Before you say it, I know what you’re thinking: (1) Aren’t those the toughest bass in the lake to catch? (2) Aren’t they the least reliable? (3) Aren’t they just small fish?

When most bass anglers think about suspended fish, they think of bass that are way offshore, suspending off the side of deep ledges or channels and not really relating to any piece of structure or cover. These bass are not only tough to locate (though modern electronics have made that easier), but they’re almost always in a negative feeding mode that only changes a couple of times a day — like early and late or at night or when a big school of shad comes by.

The suspended bass I like to target in late summer are holding near visual targets like wave breaks, docks and piers, or bridge pilings. These fish are quite a bit easier to locate and catch.

It’s hard to say why bass suspend at this time of year. Maybe they’re holding in the thermocline — the well-oxygenated layer of water between the hot shallower water and the cooler, but low-oxygen depths. Maybe the thermocline is starting to break up, and they’re scattering in the water column.

I don’t pretend to know what they’re thinking, but I can tell you how I catch them in August and September.

What I like about wave breaks, docks and piers, and bridge pilings is that they offer shade that the fish can hold in all day long, and they give me a target that I can throw at and know I’m in an area that’s likely to be productive.

The depth around these targets usually ranges from 18 to 30 feet deep or more. Since the fish are suspended, the bottom depth is not important as long as there’s plenty of it — at least 18 or 20 feet.

And because these fish are suspended, I believe they’re mostly looking up for their food. I try to use that to my advantage. Even though the fish might be holding 15 feet deep over 30 feet of water, my favorite bait to start is usually a topwater like the Berkley J-Walker in bone. It might take more than one cast to pull the fish up from those depths, but the strikes can be explosive, and once you get a hit or two, the whole school can get active. Doubles are not unusual.

If topwater doesn’t work or the topwater bite dies down but I know there are still fish there, I go below the surface to catch them. I’m usually throwing a 1/2-ounce Andy’s Custom E Series Gospel Jig in a shad pattern and using 12- or 14-pound Bass Pro Shops 100% Fluorocarbon line. I’ll count it down until it’s in or just above the school and pump it up and down. The strikes come on the fall.

Another great subsurface lure for suspended bass is a big flutter spoon. I fish it a lot like the jig, but on heavier line (20-pound). Again, the key is to keep the spoon just above the school, where they can see it and strike it on the fall.

One important factor with this pattern is to present your baits from multiple angles. If there’s current, you generally want your lure moving with it because the bass will be facing into the flow, but if there’s no current you can only determine the best presentation angle by experimenting.

Whatever your angle, try not to get your boat between the fish and the sun. A shadow that suddenly appears like that can shut the bite down.