JACOB WHEELER: My Thoughts on Forward-Facing Sonar (Part 1 of 2) 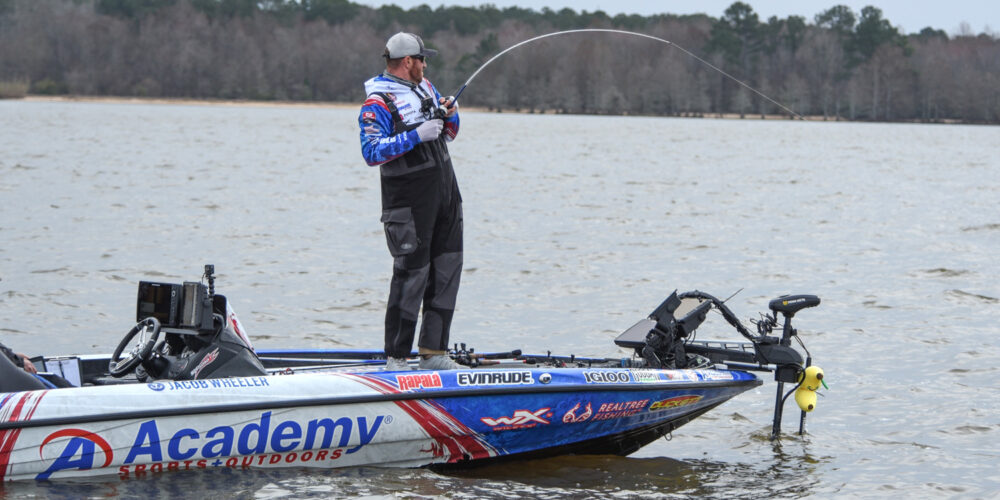 Forward-facing sonar is a hot topic in tournament bass fishing, thanks partly to changes in schedules that allowed the technology to shine. Photo by Garrick Dixon
January 20, 2021 • Jacob Wheeler • Angler Columns

That seems to be the only thing anyone wants to talk about in tournament bass fishing these days. People are now convinced that if you put forward-facing sonar on your boat, you’re going to catch ’em every single cast.

I think we need to take a moment…take a breath…and put this whole forward-looking thing into perspective with a couple of blogs. Yes, being able to see out in front of the boat is a relatively new view of our underwater world. Yes, there are days when it has advantages, especially with smallmouth and suspended spotted bass – no doubt. But believe me, it’s not the silver bullet some think it is.

I’ve used every kind, brand and type of forward-facing sonar and imaging on the market today. For this blog, I’m going to talk about forward-facing technology as a whole.

First of all, this “new” technology has been around for several years now. However, I think these units got so much of the spotlight in 2020 because of the tournament schedule interruptions from COVID-19. Think about it: All tournaments in the U.S. had to stop fishing sometime around March of last year. March is the spawn in many parts of the country and when a lot of fishing is done on the bank.

The shutdown continued through April and May, which is spawn to postspawn, including fry guarding, shad spawns and bream spawns. Much of that’s bank-related as well.

Most circuits cranked back up around June when a lot of fish across the country had formed offshore schools. By July and August, the tours began their trek up to smallmouth country with events being held on St. Clair, Sturgeon Bay and Erie – all places where this technology shines the brightest. Then came all the make-up tournaments for 2020. Events that were supposed to be held in March, April and May were now being held in October, November and December – the time of year when bass get weird, go out in the middle of nowhere and suspend.

Obviously, the “on the bank” time of year was vastly underrepresented and forward-facing sonar got a lot of use at times and locations where it works the best.

Since it’s blown up so big this year, I’ve had people tell me that this new technology is so potent that it will quickly close the gap between top tour professionals and the weekend warriors who just started fishing tournaments.

I beg to differ on that one.

Forward-facing sonar isn’t a substitute for natural intuition and efficient decision-making, which good anglers rely on hourly during the course of a tournament.

If you need proof of this, I present Jordan Lee. A fact that seems to get left out of all the conversations about how forward-facing sonar is ruling the fishing world is that Jordan Lee won the Bass Pro Tour Angler of the Year title without any kind of forward-facing sonar at all. Jo Lee won AOY straight up with 2D, down and side scan and a lot of pure fishing intuition and spectacular decision-making.

On the flip side, there are anglers who’ve purchased these types of units since they first came out, hoping it would be the magic carpet that would help them sail up through the standings, and it just hasn’t happened.

It’s Harder Than It Looks

Another misconception about these devices is that they draw fish on a screen with a red arrow that says, “cast here,” like one of those YouTube thumbnails. I’ve heard people say, “Those pros see dots on that forward-facing sonar and they just throw a lure to the dot and catch them every time!”

I’m telling you, it’s just not that easy. There’s a lot happening on those screens at any given time. There are all kinds of blobs, dots, arcs, lines and dashes moving around all the time. You have to be able to decipher what you’re looking at based on size, distance, spacing, species and the direction things are moving.

A lot of what I know about forward-facing sonar I learned from reading 2D for years. Then, add in more years of deciphering side and down imaging.  It’s a building process. You have to already be pretty good with electronics to understand what you’re looking at with forward-facing sonar.

Can you really see a white dot sitting still, throw to it and watch it “eat” your lure? Yes, it happens. Yes, it’s cool to see. But it’s simply not an everyday occurrence. And one thing is for dang sure, just because you can see a white dot and cast your lure right to it is no guarantee you’re getting a bite.

I’ll get into this and a lot more on the second part of this blog.