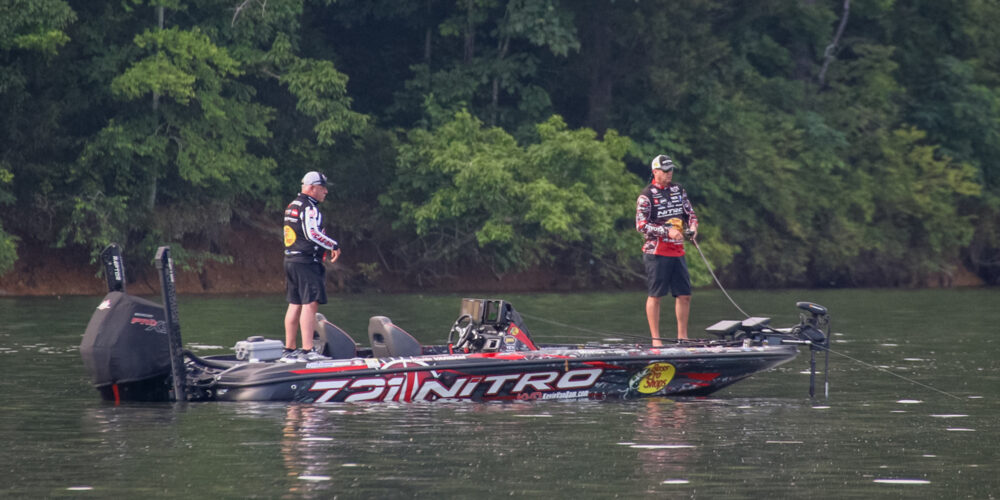 As the postspawn transitions into the mid-summer, shallow fishing options usually begin to dry up across the country. The postspawn feeding frenzy in the shallows begins to wane and the thick shad spawns become more sporadic. The water temperature gets higher, and in general, the overall hub of underwater activity begins to move out deeper. This is when the offshore guys like myself lick their chops.

However, each summer I’m always impressed with pros who are able to maximize the shallow-water bite by chasing shade into the months of May and June in national events. This year alone, there have already been some successful shade-chasing happening in MLF competition. Jacob Wheeler won the Bass Pro Tour event on Lake Travis fishing the shade of docks where the last of the shad spawn was going on. More recently, the shade of docks played a role in Ott DeFoe’s Bass Pro Tour win at the Harris Chain of Lakes.

In between those two events, there was a Pro Circuit event on Lake Eufaula, which is known for its ledge fishing in May, and it was won up the river on a shade pattern. These are examples that running shade into the summer months is a tried and true pattern that still works in the big leagues to this day.

The obvious forms of shade include submergent vegetation, docks and shade lines from high banks or stands of tall trees. This type of broad shade is usually used to prolong an already existing bite, such as a shad spawn or a schooling bite.

Actually running shade as a pattern is a little bit different. The movement of the sun changes the shape of shade during the day. Given that, shade is sort of a ghost pattern because it’s constantly moving. Identifying when the shade is at its sweetest point is critical. In a way, running shade is like running a tide – you’re constantly moving with the sun to fish the shade when it’s at its best point to position fish.

With this in mind, some sort of isolated, or “tight” shadows are best for stitching together a shade pattern you can run with predictability.

While bluffy banks, high trees, big stretches of docks and vegetation all constitute running shade, it’s the smaller, less prominent stuff that can really set up a potent shade pattern. This is especially true on lake with lots of residential development where manicured lawns have replaced woods on the bank.

Single leafy trees or thick bushes that cast isolated shadows out on to the water are excellent examples of isolated shade. Perhaps a big sycamore or oak tree, a willow arching out over the water or even heavy clumps of sawgrass or cattails at the water’s edge.

Similarly, sea walls are excellent sneaky shade throwers on lakes with residential development. Bass will get right up against the narrowest band of shade created by the walls.

Most residential lakes also have a lot of docks, but sometimes it’s the thinner walkways running from the bank to the docks that are the more dependable shade pattern.

Up north, people with lake cabins will often moor swim platforms, big rafts, floats and even pontoons right off the bank – all great isolated shadow casters. Also, I’ve seen sailboats moored in a bay or cove make for a great shade pattern.

Floating marina “fences,” break walls and “tire reefs” are great shade-makers as well. In fact, Bobby Lane finished runner-up at Travis by fishing the deep shade of marina walls. Granted, Bobby was fishing in extremely deep water, but the fish were suspended in the upper part of the water column, using the long shadows cast by the marina walls.

Inside marinas, the long, high catwalks that connect marina docks to the banks are also a perfect band of shade from shallow to deep. Speaking of bands of shade, bridges themselves cast contrasting shadows across rivers and creeks. I’m not just talking about the pilings and columns here, I’ve literally seen fish suspend and school all day in the shade of a bridge.

Another sneaky source of shade is cracks in bluffs. Once the sun gets up and hits big rocks bluffs at an angle, it creates shadowy streaks down the crevices and behind big hunks of rock, really positioning fish in those darker zones.

You’ve probably heard of matching the hatch in fishing, but another version of it is matching the patch, or simply using lures that fit the patch of shade you want to fish.

Big stretches of morning or evening shade from bluffs or tall trees that shade one side of a sizeable cove or pocket calls for faster moving lures that will cover water. Bass that are using shade to ambush are typically looking up, so topwaters like buzz baits, walkers and ploppers are all good choices. Fast-moving subsurface lures like swim jigs, Thunder Crickets, spinnerbaits and jerkbaits will work too.

When shade is smaller or more isolated, you need something that hangs or hovers in that strike zone longer. One of my favorite lures to skip under overhanging bushes is a floating frog. A popper-style topwater that spits and splashes and then sits still is deadly in thin shadows along seawalls or isolated patches of shade from bushes. A wacky rig is another deadly choice for skipping to single shadows formed by isolated docks, pontoons, platforms or bluff cracks.

If you’re tired of dealing with the offshore ledge crowd this summer, try looking for the untapped shadows around the bank and you just might find you got it made in the shade.