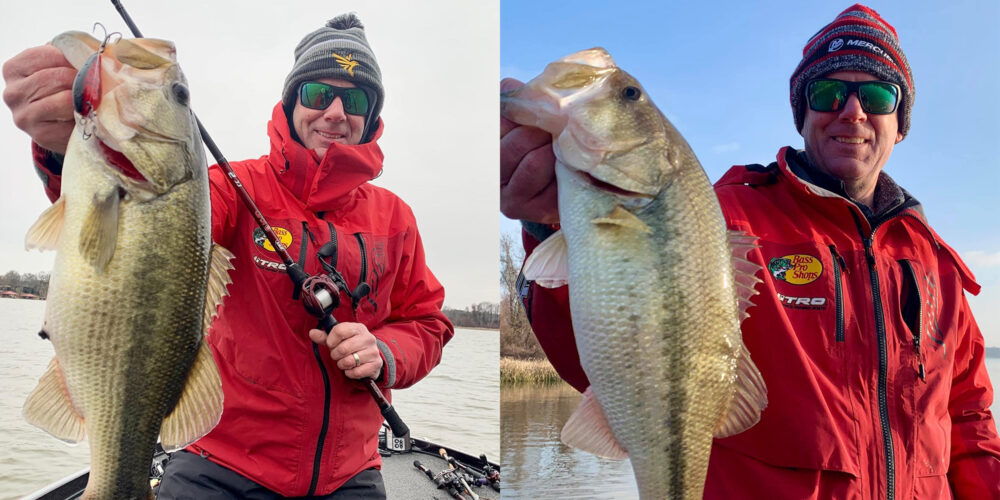 It’s starting to get to the middle of winter in a lot of places around the country. Water temperatures are bottoming out for the year, which puts bass in a state of semi-hibernation. Their metabolism has slowed way down and their activity level has been squelched.

When I talk about the kind of water temperature that puts bass into a passive state, it’s relative. While 48-degree water borders on dormancy for Florida-strain bass in the south, 48 degrees is still pretty warm for smallmouth in Michigan.

When water temps do reach their lowest point in a given region, bass will huddle up in deeper, more stable areas and become inactive. The good news is, bass are grumpy creatures by nature. They don’t like to be pestered, especially during their winter slumber. If something gets in their face, they strike out, mostly out of pure reaction. After all, their mouth is the only defensive weapon they have.

Several of my favorite cold-water reactionary lures for these conditions include a suspending jerkbait, a Red Eyed Shad, a jigging spoon and a metal blade bait. All of these lures are “snappy” reaction lures. They’re hard baits designed to get into a zone where bass are sulking and essentially snap or flare in front of a fish’s face and provoke their inherent instinct to strike in self-defense.

In addition, I’ll add three more reaction lures: a football jig, a punching rig and a swimbait. These are softer lures and may be viewed as “slower” baits but they are used to provoke that same reaction with a fast flash in a bass’ face.

With these reaction tools in mind, here’s a closer look at which ones I use based on super-cold water conditions in these areas of the country:

When the natural lakes of Florida and the lowland impoundments of Texas, Mississippi, Alabama and Georgia get to the 50-degree mark, I’m starting with a suspending KVD 300 Jerkbait and a 1/2-ounce Red Eyed Shad in ditches, drains or “voids” in the grass in lakes like Toledo Bend, Ross Barnett and Toho. When these baits are snatched out of grass aggressively, it trips the trigger of cold, moody bass.

If the lake has matted hyacinths or hydrilla, bass will sulk up under them to nurse brain freeze. Punch a 1-1/2 ounce Tour Grade tungsten weight with a Rage Punch Bug down through their roof and they’ll snap it up out of reaction.

Moving up into the highland impoundments of the south like Lanier, Murray, Hartwell, Smith Lake and Lake Martin with 45- to 50-degree water temperatures and spotted bass become a consideration.

Using my electronics, I’ll scout deep breaks, main lake points and humps, timbered creek channels and channel swing bluffs. Any of these structures mixed with timber, brush or ledge rock is ideal. Don’t be surprised if the fish you see on your electronics don’t want to eat. Remember, you have to make them react to your lures.  With that, more reaction baits come into play.

To reach extra depth with a jerkbait, I’ll go to the KVD 300D, which runs down to 10 feet. In addition, I’ll get out the football jig, the Rage Swimmer and a jigging spoon.

During this time, a 3/4-ounce Tour Grade Football Jig really shines on bluffy, channel-swing ledge rock and “stair step” rock points. Winter bass like to snug up to the vertical faces of the small ledges formed by stair-stepping rock. By “walking” a heavy jig down the stairs, it falls off those little ledges right into a bass’ space.

The jig with a 3.25-inch Rage Swimmer is to target the tops of deep timber where winter bass suspend, contacting the wood to cause a deflection that results in a reaction bite. A 1/4-ounce head will get it to 10 to 15 feet. A 3/8-ounce head will take it to 20 feet and 1/2-ounce will get you to timber tops in 30 feet.

Keep a 3/4-ounce jigging spoon at the ready on your deck in the event you see a ball of shad or stagnant arches that won’t move in deep timber. Dropping a spoon straight to them, and hopping it up in their face can create the type of reaction bite I’m talking about.

Once we move up into northern Kentucky, Tennessee, Arkansas and into the lower Midwest this time of year, we are now talking about seriously cold water, like low 40s and below. Places like Dale Hollow, Cumberland, Cherokee and Table Rock occasionally get cold enough to form ice in the calmer backwaters.

When we start talking 40 degrees and below, lure size, profile and vibration should be toned down. You need something compact and subtle to infiltrate their deeper haunts and to sort of buzz into their space like an annoying fly, triggering a reactionary swat so to speak.

For this scenario, my two primary super-cold water go-to’s are the Rage Swimmer and a 3/4-ounce metal blade bait. Creep the Rage Swimmer along the bottom in a stop-and-go fashion, literally belly bumping the bottom, feeling for any kind of cover and “dropping” the swimmer into any holes, ledges or crevices.

We don’t hear as much about metal blade baits as the other lures I’ve mentioned, but trust me they are a killer in super cold water. Lift and drop them along the bottom in mini hops, like 6 to 8 inches at a time.

The swimmer and the blade bait are usually the last two lures I’ll use before the water turns hard and we start drilling holes… but that’s a topic for another time.