KEVIN VANDAM: There Was a Lot of 'New' at the Kissimmee Chain - Major League Fishing

KEVIN VANDAM: There Was a Lot of ‘New’ at the Kissimmee Chain 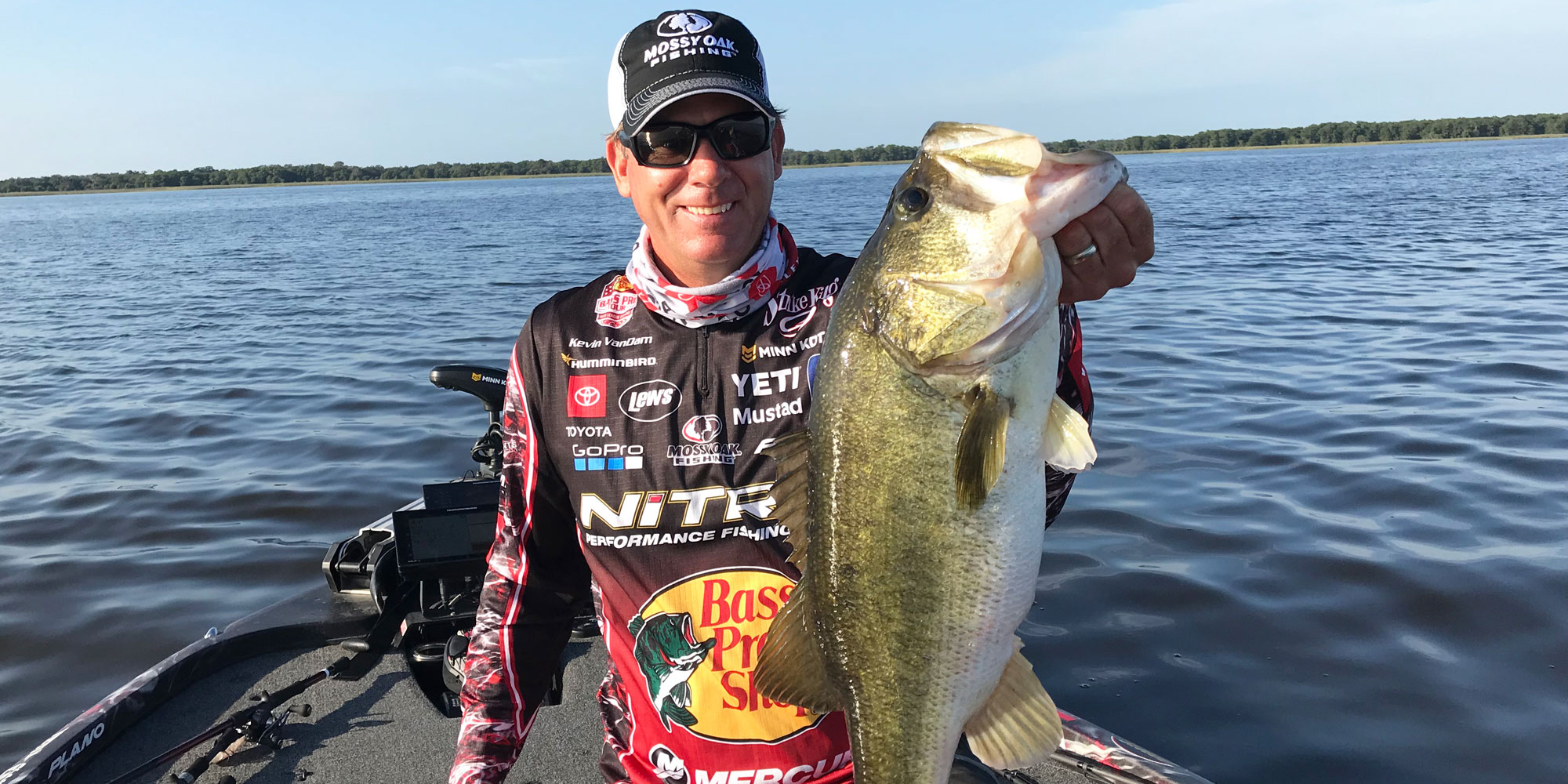 The Kissimmee Chain in June was a learning experience for Kevin VanDam and the rest of the Bass Pro Tour field.

The weather at Lake Toho for Heavy Hitters may have been hot, but the cool part was going to a lake at a time of year where very little history exists. Anymore, it gets harder and harder to find venues where the historical log of national tournaments is a clean slate and Toho in June was just such a place.

With just two days of practice, I rode the entire chain of lakes. I ended up liking Cypress the best because it seemed to have the healthiest grass, plus the water had a little more color to it. The day I practiced in Cypress, I caught a couple of 5-pound-class fish before rolling the hook over and getting about 10 more bites on a Strike King Thunder Cricket. The weather was cloudy, windy and rainy and it seemed like the fish were really biting in Cypress.

I spent a lot of time in Toho, too, and found a few good places in there as well, but the grass just seemed to be really scattered in Toho. Beyond that, I rode most of Kissimmee and Hatchineha as well, but I didn’t find anything that really suited me on those lakes.

Days 1 and 2: Success at Cypress Lake

Given my practice, I was all in on Cypress the first day. I ran straight to my best stretch of grass of in there and went the first hour without a bite. I stayed with it, though, and my first bite of the event was a 7-10, which got me right back in the game.

John Murray was fishing the same area as well and caught back-to-back 7-13s, so I knew those big fish were still in there. I went on to catch another 4-pounder and a 5-pounder on the Thunder Cricket, which put me in 11th after the first day with 17-5.

I returned to Cypress the second day, and the conditions had completely changed. It was slick, calm and sunny, so I switched to a 4.75 Rage Swimmer on a Mustad UltraPoint KVD Weighted Grip-Pin Swimbait Hook and caught a 5-pounder right off the bat. Then I went a while without a bite before catching a 4-pounder.

With those two fish, I knew I was in the Knockout Round and I started running around practicing. With all the rain, current had started running through the chain, so I tried fishing some current places in Cypress, which only produced non-scorables. For the third period, I decided to lock back up into Toho and try a couple of offshore places up there.

On my very first stop on an isolated grass clump in Toho, I caught a couple of solid 3-pounders and realized I might have underestimated the Toho bite. I ended the day with six bass for nearly 20 pounds, which put me in eighth place and headed for the Knockout Round.

Knockout Round: Had to Make Moves

In the Knockout Round, I headed back to Cypress to start the day, which got me out of the blocks fast. I caught a 3-pounder pretty quick on the swimbait and then came my coolest fish catch of the week: I was Taloned-down, fishing a big isolated grass clump which was surrounded by bream beds. I was watching my 360 and I noticed a big white-hot dot suddenly appear on the screen.

It was suspended up high near the clump. I fired a Strike King KVD 300 jerkbait out there and on the third jerk, a 7-10 smoked it! Every day I use that 360 Mega Imaging, it amazes me more and more.

After that big one, my Cypress bite died and the SCORETRACKER® started lighting up. I knew I had to move back up to Toho to some of the offshore grass I fished the day before.

In Toho, I was staking down in front of the isolated clumps, framing them up on my 360 and literally watching the screen, waiting for bass to swim into the beam. Once I saw fish on the screen, I would cast a Strike King 4.0 squarebill over them, crank it down and get them to react on it.

I caught a couple of scorables off the first offshore clump I fished in Toho. Then I noticed Bryan Thrift fishing towards me. That’s the double-edge sword of the Knockout Round – I was in Group A and Thrift was in Group B – so we never saw each other during the week until the Knockout Round. As it turned out, Bryan was fishing some of the same clumps as I was. He has 360 too, so I’m guessing he was fishing them in a similar manner.

I knew there was no future in Bryan and I dividing up the same clumps. The Top 8 cut line had become pretty steep, and the thought of that $50,000 Big Bass award started to play in my head.

By afternoon some clouds, wind and storms were starting to form and I felt like those were the best conditions for Cypress. With that, I locked back down to Cypress because I felt like it had the best potential for a giant 9- or 10-pound bass to win the $50K.

As it turned out, I never got another bite in Cypress and ended my week in 19th place. That now puts me 17th in the points for the season going into the final event at Sturgeon Bay, a special place in my heart.

I’m looking forward to getting to the Great Lakes and sewing up a REDCREST berth with a shot at Grand Lake in February!

Quick tackle-storage tip for you: bladed jigs like the Thunder Cricket have always been a challenge to store properly, but the Plano EDGE Series Jigs/Bladed Jigs Utility Box solves that problem thanks to silicone columns that keep the baits place without crushing or kinking the skirts.

SKEET REESE: New Projects, Full Schedule Ahead for Next Season