KEVIN VANDAM: They Don’t All Spawn at Once! 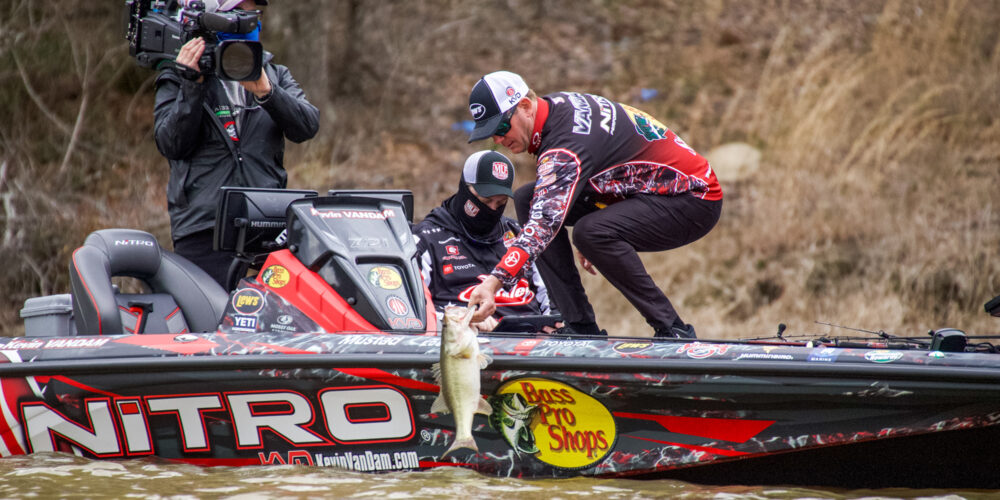 If you're going to catch good ones like this, keep in mind: Fish don't all spawn at once. Photo by Phoenix Moore. Angler: Kevin VanDam.
May 7, 2021 • Kevin VanDam • Angler Columns

Take the title of this blog and remember it during the springtime. It’s a bass fishing law; one I know well. But even I forget it sometimes.

The first three Bass Pro Tour events of the season certainly tested my memory of this mandate. At Eufaula, Rayburn and Raleigh, fish were right on the verge of spawning. In all three events, forecasts for stable conditions and fast warming water drew me towards the bank to intercept the first wave of spawners. But in each case, the wave was not near as big as I’d hoped and the reason is…they don’t all spawn at the same time!

Landing on the first major wave of spawn-motivated bass as they flood the bank is the “lightning in a bottle” of bass fishing. If you’ve ever witnessed herds of big bass moving up shallow by the hour – especially on places like Santee Cooper, Okeechobee or Toledo Bend – you know what I mean.

Many times these big migrations can happen overnight. One day, a bedding flat might be completely barren; the next day, it might be covered in bass eating everything that moves. If you can anticipate such a move and be the first one to take advantage of it, it’s like fishing for fish that have never seen a lure in their life. Some of the biggest limits I’ve caught in my career came this way.

The allure of finding this situation in a tournament is lethal. Once you experience it, you want to recreate that magic every time you put the boat in the water in the spring. That’s been the story of my tournament season so far. At each event, I just knew they were going to crash the banks at any time and I practiced for that just a little too much.

The illusion here is thinking that every fish in the lake is going to move up at the same time. And it just doesn’t work that way. The spawn is a two- to three-month process in most lakes. And it usually happens in waves at different times in different portions of the lake, especially in big lakes.

Also, that window of when they move up and eat everything in sight before going on beds is usually a small window in a specific area; it lasts maybe a day. Once they actually spawn and “set down,” then it takes time to catch them. Hence, catching this moment perfectly is very elusive; it’s a fast-moving target. The thing to keep in mind is they don’t all spawn at once and at any given time during the spawn, there are other patterns going on that are not as volatile.

Prespawn and postspawn patterns that surround the spawn are more stable and consistent over time than trying to catch that sudden move to the bank in a single pocket or cove. Also, these patterns are usually more repeatable over large sections of the lake, providing more real estate to work with.

Typically the shallower, upper ends of lakes warm up fastest and the deeper, clearer lower ends are slower to warm. With that, the spawn in the upper end of a lake can be as much as a month ahead of the lower end. If they are spawning at the dam, chances are there are some great post-spawn pattern options far up the lake. Conversely, if fish are making beds up the lake, chances are there are fish far down the lake that are still a few weeks away from spawning.

Both Eufaula and Rayburn provided examples of this. At Eufaula, bass had just started spawning up the river but down at the dam they were still prespawn. Dustin Connell won that event on the lower end twitching a jerkbait around brushpiles to catch staging fish. At Rayburn, main lake bass were just on the verge of spawning, but far up in the river, bass were mostly done spawning; that’s where Ott DeFoe won the event catching hungry postspawn bass.

We all want to land on a big wad of fish invading the bank. Sometimes conditions seem so perfect for it to happen, but it just doesn’t. The fact is nature doesn’t follow a rulebook on when every fish should report to the bank to spawn. Sometimes working more stable patterns around the spawn is a better play than trying to catch lightning in a bottle.