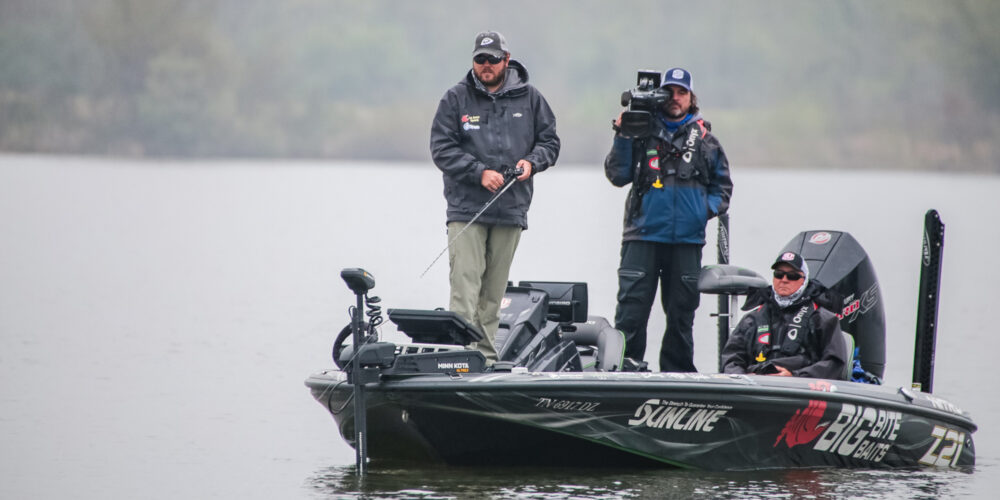 As an MLF pro and the owner of Dayton Dock and Grill on Lake Chickamauga, it’s always interesting to look back over the tackle sales trends here at the store when the year ends. A lot of 2020’s hot sellers were the usual suspects: ChatterBaits, hollow-bodied frogs and plenty of soft plastics. But there was one class of lure that climbed the sales ladder all year long that kind of surprised me: blade baits and tail spinners.

Obviously, these metal baits have been around for years. Guys were using the standard-issue Little George tail spinner and Silver Buddy blade bait here on Chickamauga before I was born. I’ve always kept a few on the racks during the winter when they sell the best. This past year, however, there was a definite resurgence of metal bait sales that lasted all year long.

For years, the metal bait tray in our tackle boxes has been made up of the same color: silver, chrome, lead or basically some kind of gray metal. Historically, they’re pretty blah-looking lures, with old school steel hooks and hardware. In recent years, however, this class of lures has been spiffed up quite a bit with more realistic color patterns, custom paint jobs, bigger eyes, hand-tied mini skirts, scale pattern blades and better hooks and hardware.

Some new renditions of metal baits have actually combined a blade bait with a spinner on the tail to create a sort of all-in-one creation. Also, some companies have broken the traditional size barriers on blade baits, super-sizing them beyond 2 ounces.

All of this has improved the visual appeal of metal baits and also expanded the applications in which they’re typically fished in terms of time of year and water clarity.

The Expanding Range of Metal

Tail spinners and blade baits are often thought of as deep-water wintertime baits for clear water. Last year, however, they were hot sellers from winter right on through spring and summer.

During the spring, some anglers were quietly substituting their traditional noisy lipless rattle baits for blade baits in the grass. The crawfish paint schemes on the blade baits now make them look similar to lipless rattlers, but the metal has a tighter, quieter profile, which can be beneficial in pressured waters. Chartreuse-colored blade baits pushed the water clarity limits into more stained waters up in the rivers as well.

By early summer, demand for bigger blade baits increased and kept the metal going out the door. With some companies pushing the sizes of blade baits into the 1- to 3-ounce sizes, big blade baits have now become an effective ledge fishing option in the summer.

With late summer and early fall, tail spinner sales started to surge. That time of year the shad are tiny and the bass get picky about only eating something that looks and acts exactly like a small shad. When it comes to a match-the-hatch deal, a tail spinner is a perfect bait to swim through balls of small shad suspended out over the river channel.

Now that wintertime is back in full force, we’re back to the cold-water driven sales for both blades and spinners. When water temperatures get into the low 40s the blade bait really shines, especially in multiple species lakes where smallmouth and spotted bass live. That kind of cold water bunches the shad up really tight in deeper water and a blade bait is simply the most efficient lure to catch bass in that situation.

The key to having success with metal baits is finding the shad balled up, especially this time of year. I’ll often idle around for hours looking for bait in bays or ditches off the main river. I prefer to find bait balls close to the bottom. Then I cast a 1/2- or 3/4- ounce blade out there, let it go to the bottom, then just pull the rod tip up enough to make the lure vibrate a few times up off the bottom, let it drop back to the bottom on tight line and then repeat.

If the bait is suspended up higher, I’ll throw a 1/2-ounce tail spinner, hold the rod up and try to “pendulum” the spinner through the bait balls on a tight line. The blade bait works best on the bottom, the tail spinner is better for suspended fish.

Above all, I think the major thing that pushed sales of metal baits this past year was the sheer number of new people fishing. I’ve never seen as many people bass fishing as when COVID hit. Our parking lot here at the Dayton Dock and Grill was full many days of the week. People were getting out and experiencing fishing for the first time and blade baits or tail spinners are both great baits for beginners. They throw well, they’re simple to fish and they catch all species of fish, including whites and stripers.

In terms of buying metal, there are plenty of choices out there. Here are few different good ones to consider: