Big fish are showing up on day one 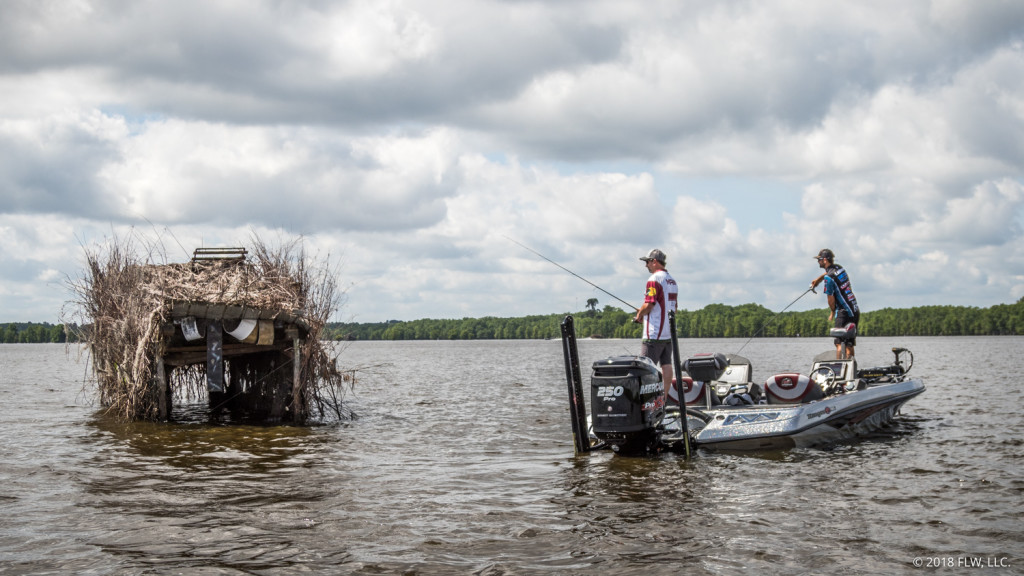 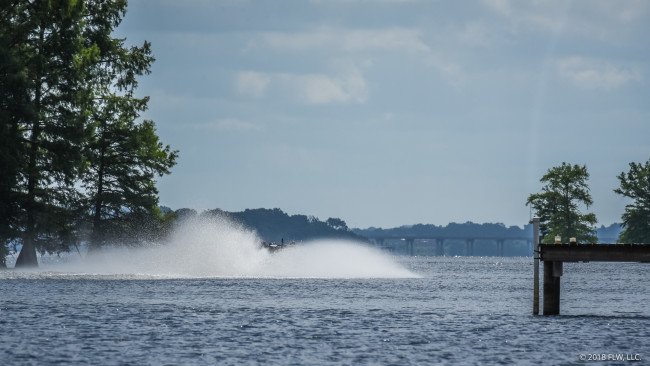 Well everyone, we're wrapping up today's on-the-water updates. The All-American anglers are set to start weighing in at 4 p.m. CT at the Bass Pro Shops in Bossier City. We will have the weigh-in broadcasted on flwfishing.com. We’re bound to have some surprise bags cross the stage with the quality of the fish in Cross Lake. Prior to the All-American weigh-in, tune into the YETI College Fishing National Championship, which starts at 2:30 p.m. and can also be found of flwfishing.com. 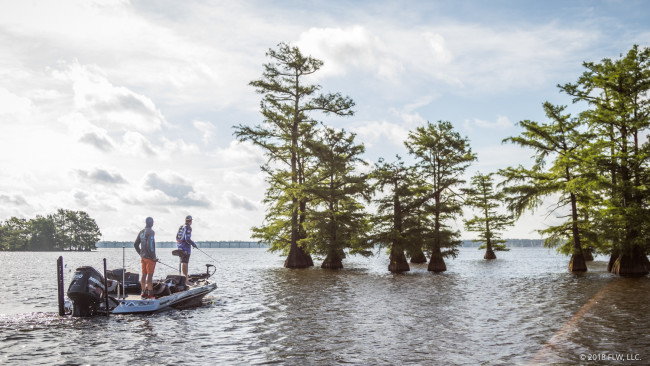 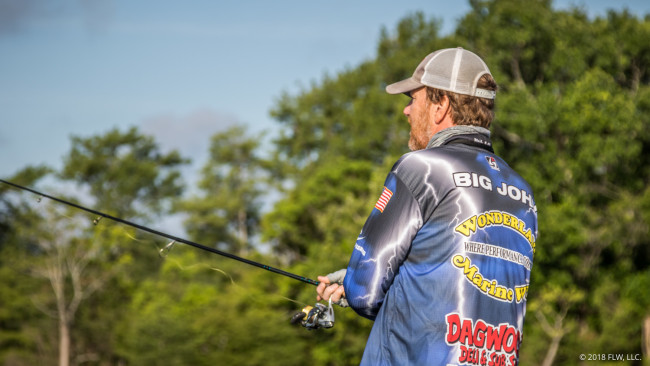 John Devries just hit a flurry and culled out three little ones. Now he has 15. Jason Sandidge has a limit for 11. His co-angler has three. BJ Nelson has a small limit – about 10 pounds.

Maine angler Nick Deering has three in his livewell. We know that he is around fish because his co-angler has four.

Roger Vinson only has to keepers so far. He told us that he has lost three good ones. He will need to capitalize on the remaining opportunities he gets today. 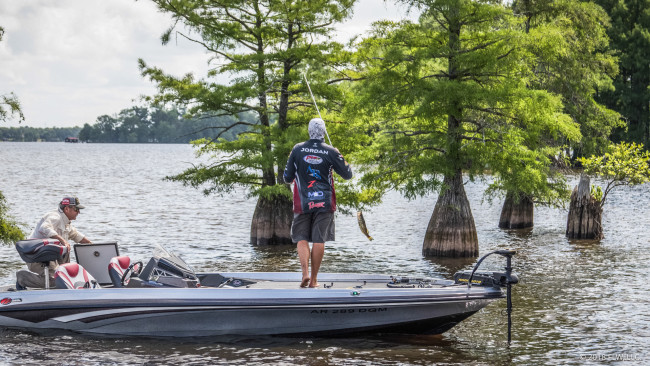 Rob Jordan caught a 4-pounder that will him up a pound. He caught the fish using a Senko around a cypress tree. That brings him to 18-pounds total.

Ben Beloski has his limit filled out. His total weight is about 15 pounds. He will need a kicker to keep up with some of the bigger bags that we have seen. 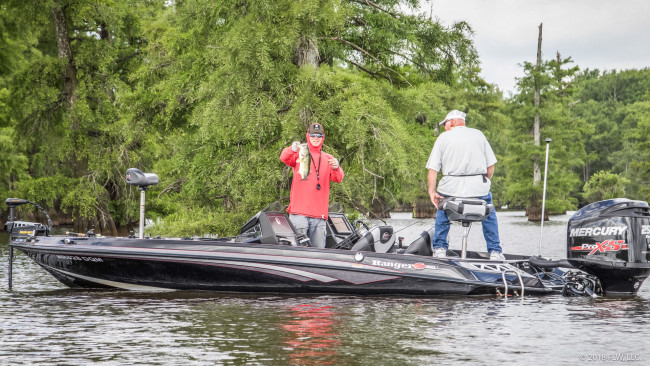 John Shore has four fish in the box that go about 15 pounds. His weight is anchored by a 7-pound kicker. Another fish will complete his limit and help him crack the 20-pound mark.

Kyle Weisenburger is on his way to a respectable limit. He has two 4-pounders and a few smaller fish in his livewell at the moment. Two more decent keepers will give him a good bag. Just now he was able to get bit on a topwater bait. He missed the fish, but he says it could be the start of something good.

Grant Kelly has found a limit. His best five go for 13 pounds.

Brian Trieschman has one keeper. Luckily it’s a good one – a 6 pounder according to him. 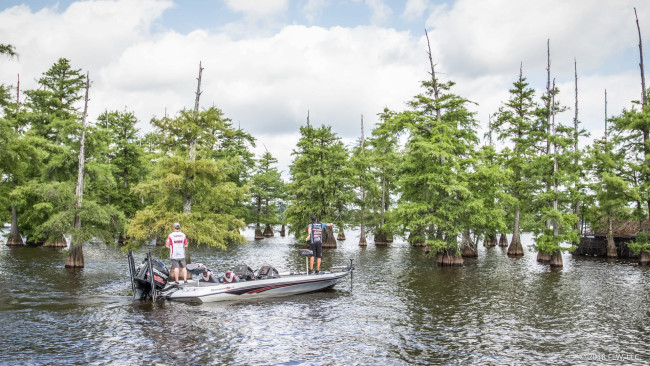 FLW Tour pro Rob Jordan has a 17-pound limit. He has been junk fishing the entire day. All of the keepers have come on three or four baits.

LeBrun just culled his smallest fish for a 5-pounder. That puts him up to around 23 pounds. He thinks tomorrow’s going to be a lot tougher because all the fresh postspawn fish are getting plucked today.

Adam Wagner also has himself a solid limit. He said he has 16 pounds or so. However, don’t be surprised if he’s lowballing his estimates by a pound or two. 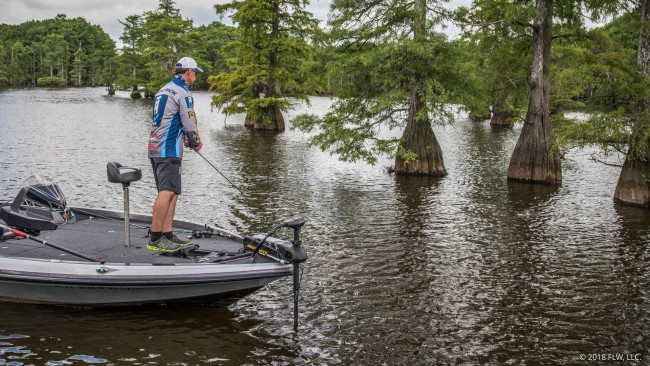 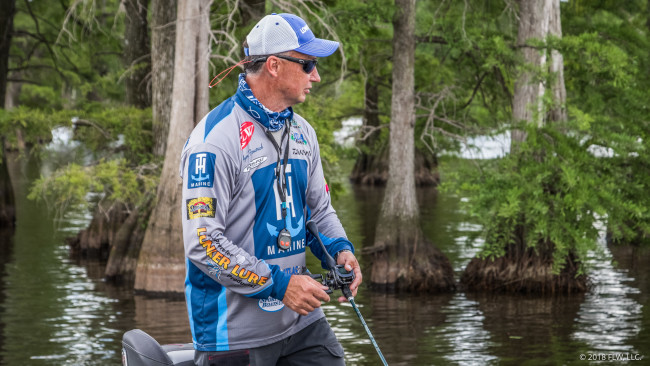 The local now has upwards of 20 pounds in his boat. LeBrun is still getting good bites too as he just pulled a big one off. Expect his weight to grow before weigh-in.

Fitzpatrick is now one fish away from filling out his limit. His fourth fish came on a crankbait. He has also been dabbling around with a topwater bait. 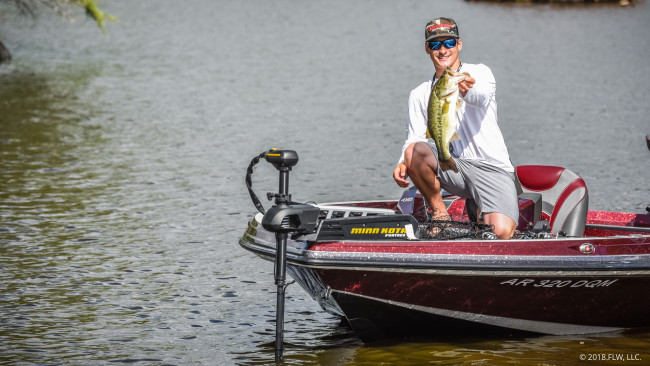 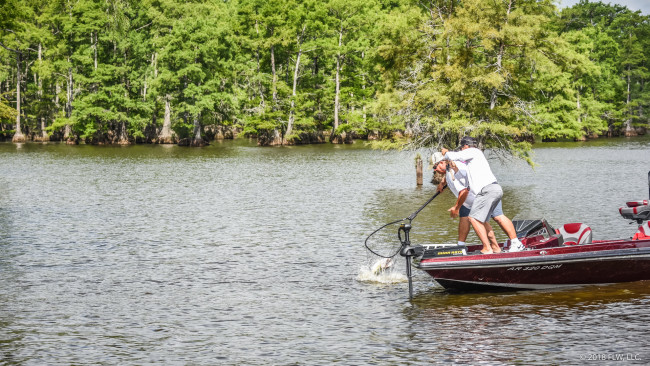 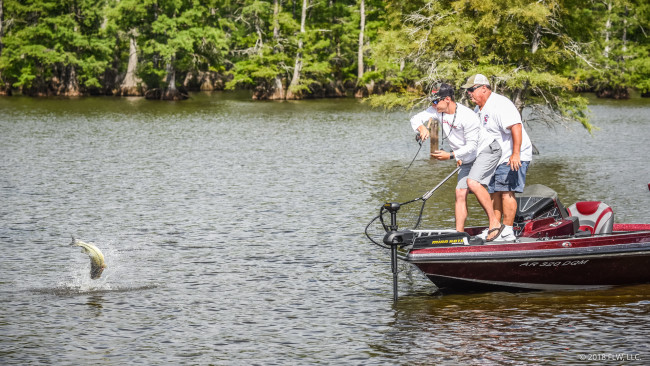 The big fish keep rolling in. Roger Fitzpatrick has a pair of five-pounders in his boat. Fitzpatrick says that he is not getting many bites, but when he does it’s a good one. Loren Torok of Idaho also has a 5-pounder in his livewell. If the anglers can keep catching bugguns we should see some impressive bags this afternoon.

John Debrise has a couple fish that weigh five-pounds total. He is targeting branches that are hanging in the water. A spinnerbait and frog are his go-to baits so far.

John Shore has two keepers in his livewell – one being nice three-pound fish. His co-angler has one in the box.

Currently, the clouds and wind are not helping the tree bite right now. If the sun can poke through anglers should start catching more fish in the shade. 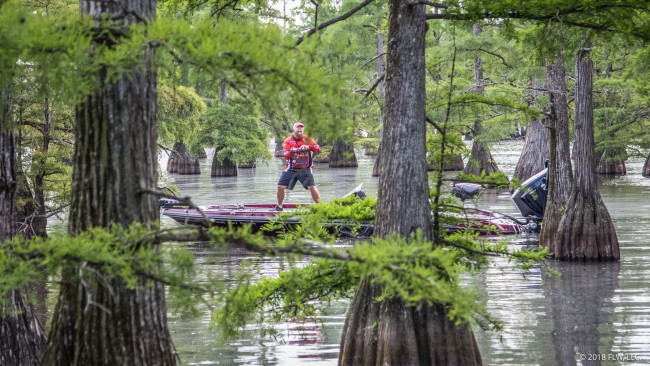 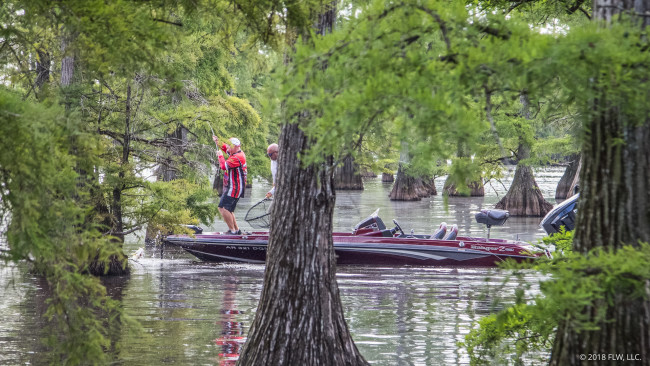 Randy Deaver just landed his first keeper of the day – a 4 1/2 pounder. The fish came near some cypress trees. He’s still fishing alongside the other Louisiana locals.

Kip Carter has the first reported limit of the day. His five fish weigh somewhere around 12 pounds. At the moment he has been flipping docks with a shaky head.

Ben Blaschke has three fish so far. One of his three is a quality keeper. His co-angler caught a bass that will go around 5 to 6 pounds.

Another local angler fishing this weekend is Randy Deaver. Deaver lives less than 10 minutes from the ramp. This morning Randy made a gamble on a crankbait spot where he thought they’d pile up with the water falling, but it was too shallow. Now he’s up in the trees where he has not caught anything other than a white bass. Not too far away are the other Louisiana locals in the tournament.

Jack Dalzell and Justin Berger have yet to boat any keepers. According to most anglers, when the sun gets higher the fishing will improve. 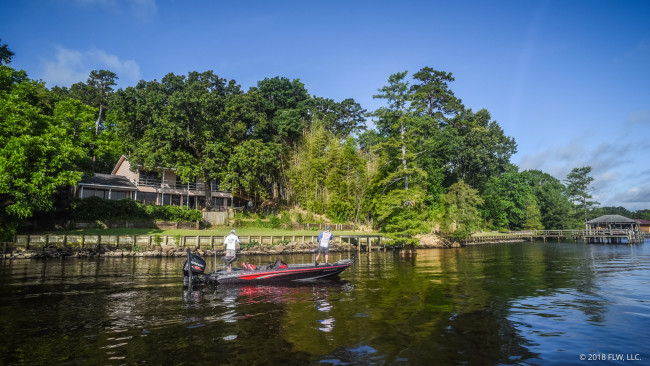 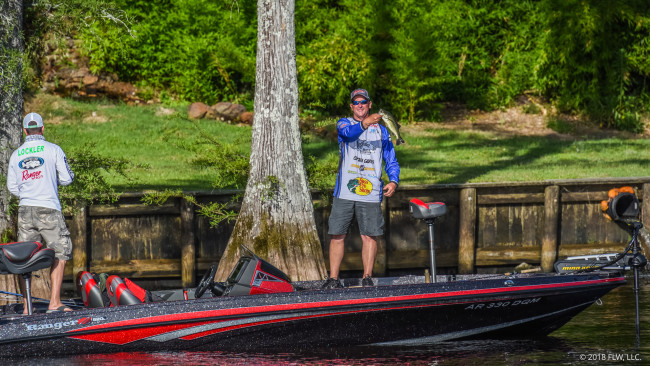 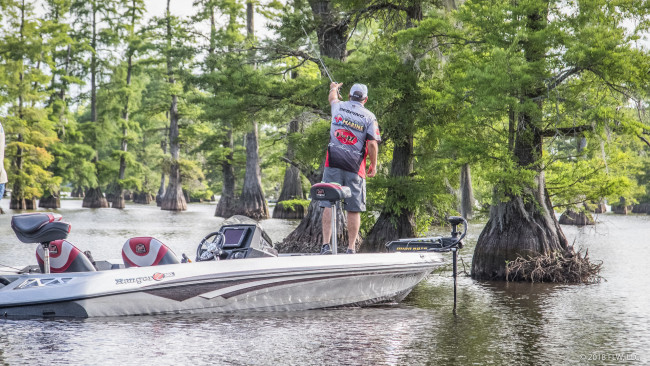 Virginia angler Richard Owen just boated a 1 1/2 pounder as we pulled up on him. He plucked the fish off of a few isolated cypress trees in-between boat docks. Nearby, a house with a waterfall feature is pumping water in and out of the lake. In all, Owen has three fish for 5-pounds.

Randy Despino of Colfax, Louisiansa has a single fish that weighs 2 1/2 pounds. 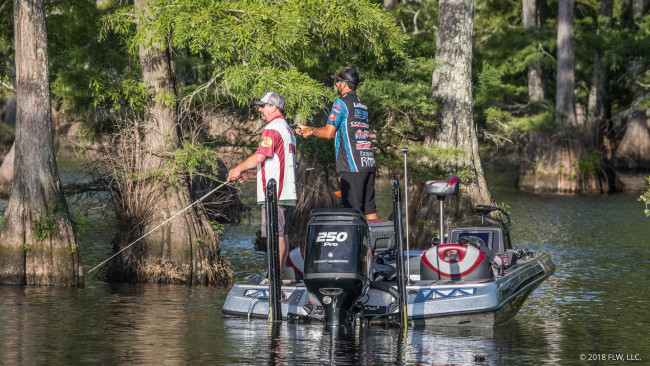 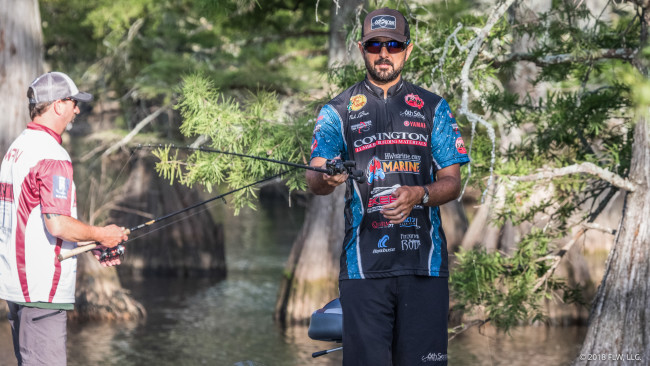 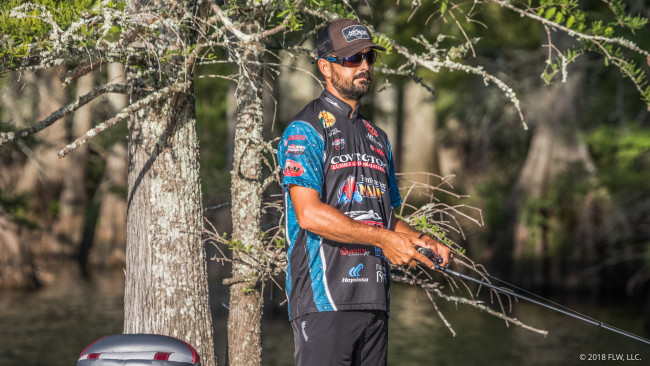 Arkansaw angler Mike Webster just boated a solid 4-pound Cross Lake bass. He was working a pair of cypress trees located near a boat dock. That brings him up to two fish in the livewell.

In reference to the 6-pounder, LeBrun says it’s the biggest he’s ever caught here. After he caught it he pointed up and said “that’s for you pop.” LeBrun says he lost his dad in February and thinks of him a lot at every big tournament. It took him about five minutes to compose himself and get back to fishing. 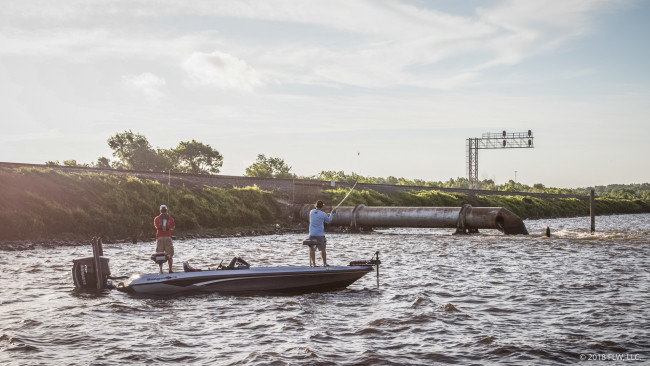 A Bossier City local fishing in the All-American is Nick LeBrun. We found him working cypress trees at a fast pace. He said he is looking for a school of active fish that is normally there in the mornings. However, they have not shown themselves yet.

Chris Panetta is fishing near a fish hatchery on the lake. The hatchery appears to be emptying all three of their fish holding ponds this morning as water and fish are flowing from the drain pipes. Panetta and his co-angler each have one keeper in the box.

Tennessee angler Kevin Powers has one keeper in the boat. At the moment he is fishing a wacky rigged Senko around boat docks.

The 49 All-American boats are out on Cross Lake hitting their first spots. Most anglers are venturing to the western portions of the lake as we only saw a few boats stay east of the 220 bridge. We will get updates on them soon.

Brent Anderson happened to be the first angler we pulled up on this morning. He was fishing an active pump-in station. Unfortunately, a local angler was spot locked directly where Brent wanted to be – so the Tennessee angler decided to move on. 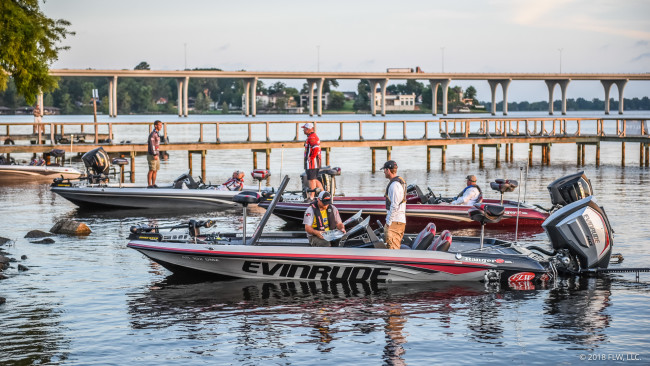 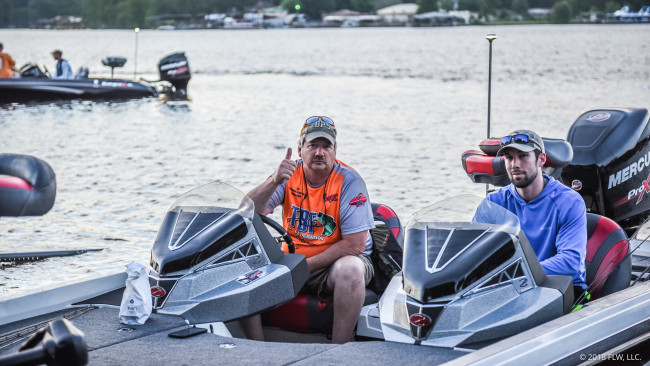 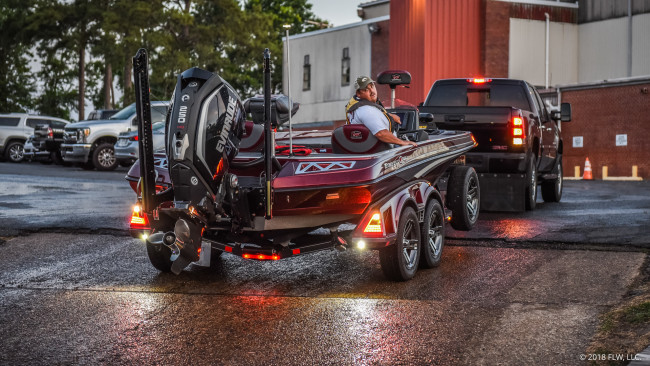 The biggest challenge that the T-H Marine BFL All-American qualifiers will face this week on Cross Lake in Louisiana might be Louisiana itself. Or, at least, the scorching hot weather that’s beating down this region of the country.

Highs are forecast to reach triple digits this week, which is going to make the All-American a grueling tournament. Then again, maybe that’s the way it should be. Championships should never be easy.

The 49 boaters and their co-angler partners who qualified through 2017’s BFL Regionals and Wild Card and the 2018 The Bass Federation National Championship blasted off at the American Legion Hall in Shreveport on Cross Lake’s eastern end this morning at 7 a.m. CT. They’ll start weighing fish at 4 p.m. behind the Bass Pro Shops in Bossier City.

Practice reports were mixed, with most anglers recounting pre-practice trips that included a couple tough days and a couple good days. That suggests they needed a little time to figure out this unique shallow-water fishery. Yesterday was the final official practice day, which followed a nine-day off-limits period.

Cross Lake is the water-supply reservoir for Shreveport. It’s a shallow impoundment of Cross and Paw Paw bayous. Though there’s not a lot of current through the lake, it’s a dynamic fishery with several inflowing creeks, an outflow at the dam, and pump-in and pump-out stations on the east end.

The western end is home to vast cypress forests that flank the bayous. Half the field could easily spread out into these areas and virtually vanish.

In between, there are hundreds of docks, smaller clusters of cypress, islands, points, sea walls, marinas and other targets to fish.

The bass are on the cusp of being fully in their summer patterns, even though it’s just a bit early. Expect them to be caught close to the main lake, near any slightly deeper channels, around docks and on a little bit of everything where there’s shad or bluegills and well-oxygenated, shaded water.

Several participants predict a winning weight of 45 to 50 pounds, but the lake is home to some real giants – we’re talking 10-pound-class bass with Florida-strain genetics. Local tournaments this time of year regularly require 20-plus to win. So odds are high that we’ll see at least a few bags better than 20 pounds, and possibly a winning weight that surprises everyone.

Regardless of the overall weights, to win this All-American will require consistency, toughness and a lot of heart, which are certainly the makings of a champion.