Fishing is tough, but a few giants are being caught 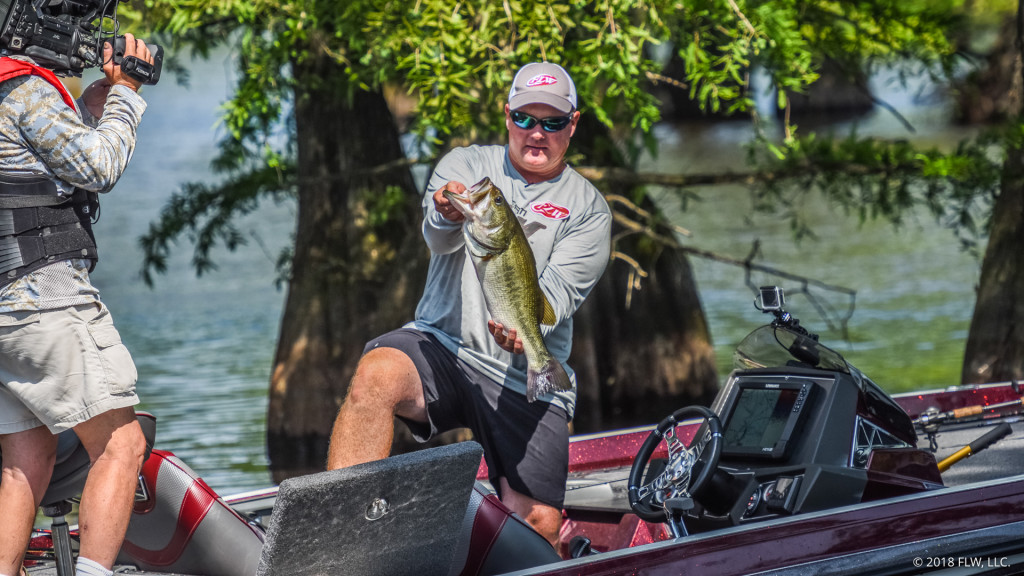 Well everyone, it’s time to close down the blog for the day. There’s no doubt that the fishing on Cross Lake has been the toughest it’s been all week. Still, big fish have been caught and a few afternoon kickers can easily win someone $100,000 and a berth in the Forrest Wood Cup. At 4 p.m. CT make sure to watch the final weigh-in on flwfishing.com.

Rob Jordan is back to where he started the morning. “This is what got me here and this is what I'm going to do,” said Jordan. He also spoke of trying something crazy during the last 30 minutes just to try something else.

Roger Fitzpatrick was in good shape as he started the day in third place . Unfortunately, his day hasn’t gone according to plan. He only has caught one keeper, while his co-angler has four fish for 14 pounds. He’s clearly around good fish, but just needs to catch them. 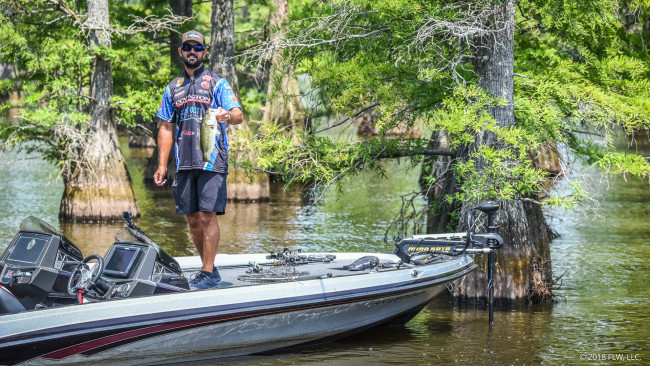 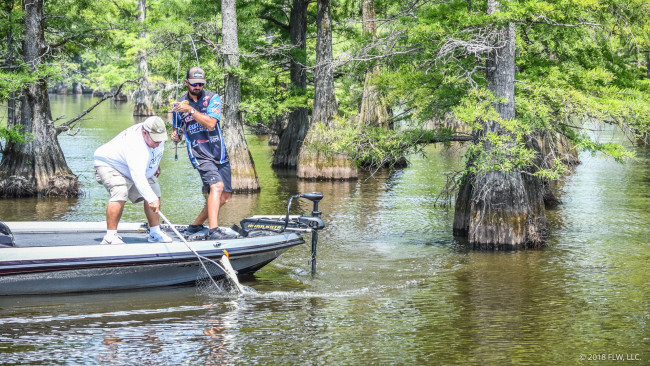 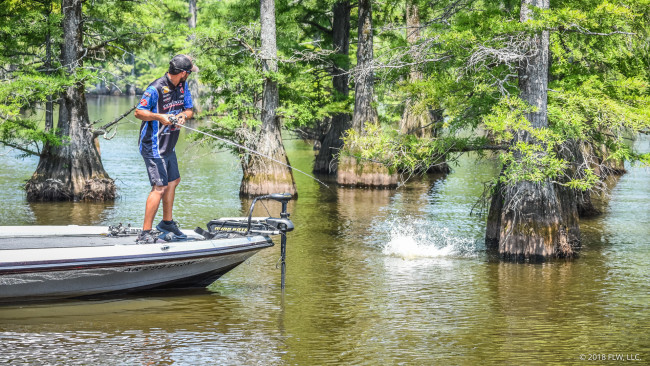 It’s starting to turn into a Deaver, LeBrun shootout on Cross Lake. LeBrun just culled up a pound and a half to bring his total to 15 pounds. However, we have a feeling it could be slightly more. At this point either of the two anglers could have the tournament lead. 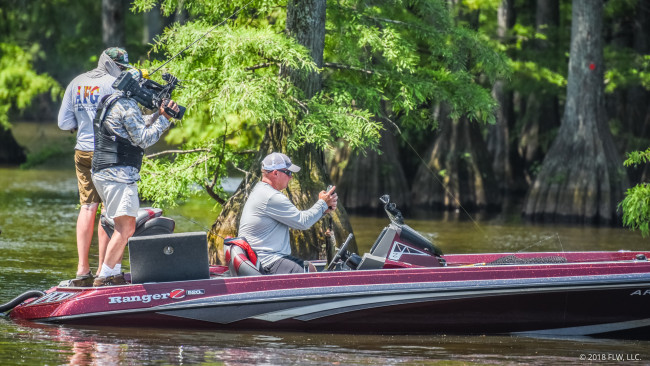 Randy Deaver just made a cull and gained six ounces. He told his cameraman that he has 12-pounds, 5-ounces at the moment. “I’m right on track. I just need one or two more 4-pounders,” said Deaver.

We’re getting the feeling that the bite could start heating up here on Cross Lake. A couple of bigguns have been boated and now we’re starting to see others’ weights creep up.

Marty Sisk just culled his limit up to about 13 pounds. He was flipping trees – “This is about the time they start biting up here for me.”

Not far from Sisk, Rob Jordan has 4 fish for 9 pounds. He just caught three of them in the last 5 to 10 minutes. Jordan said, "it's about that time now."

So far the day-two leader Randy Deaver has about 11 1/2 pounds in his livewell. Nick LeBrun is sitting with 14 is in his boat. Assuming those estimates are accurate, Deaver would hold a slight lead over Lebron for first place. 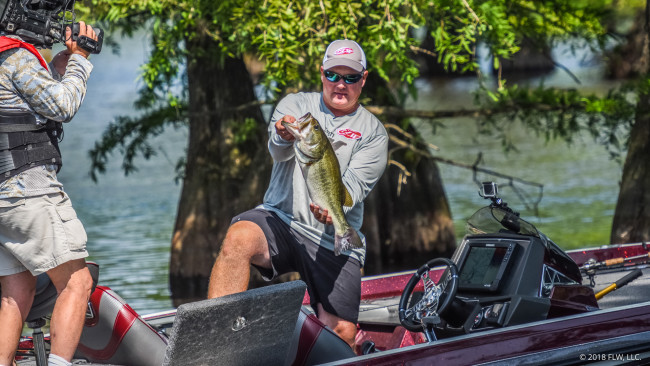 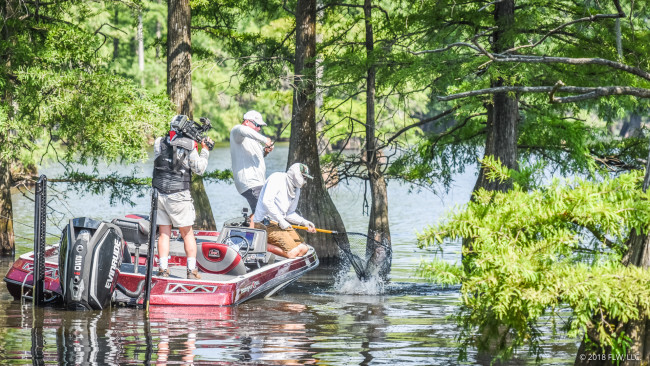 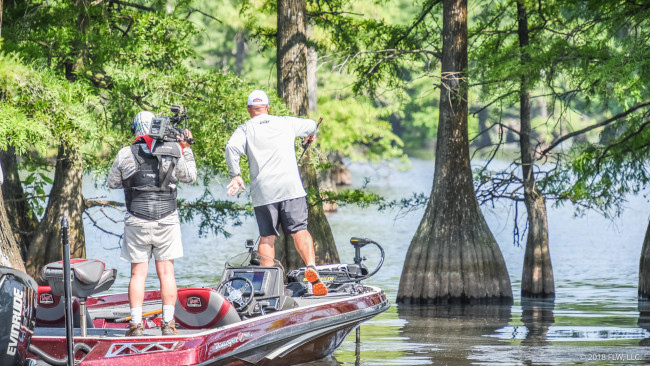 Deaver just filled out his five-fish limit in a big way. After running into a flurry of dinks the Louisiana pro caught a 6 1/4-pounder. That’s a big-time fish on a day like today. He and LeBrun are the only ones with fish over five pounds that we know of.

Blaschke has two, but only one good one. He just lost a good one in the same exact spot on a blind as he lost one yesterday. He says he’s only had four bites. Yesterday he’d caught 15 fish by this point. 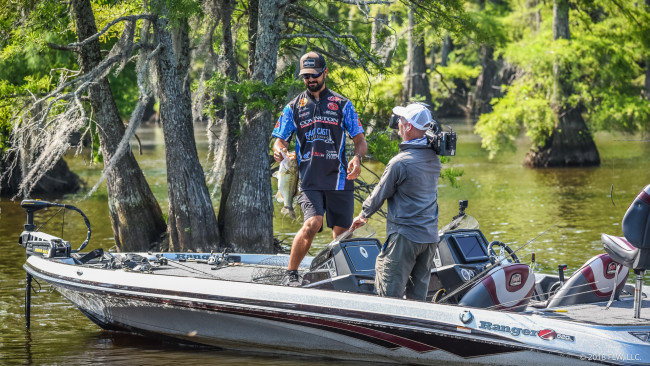 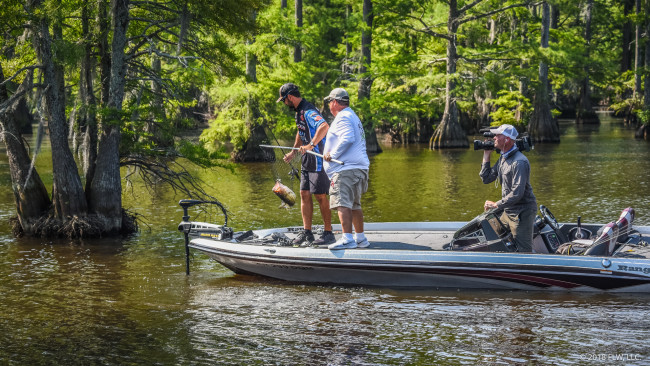 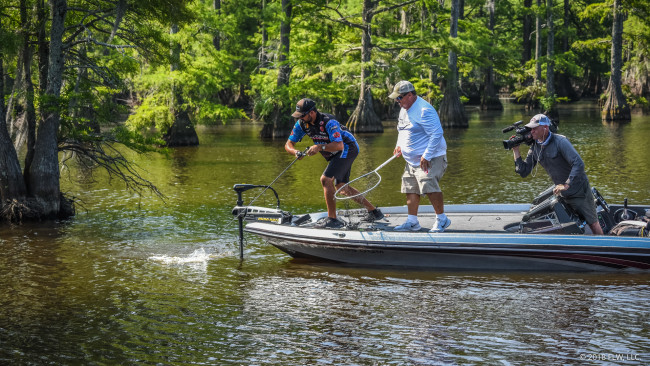 Nick LeBrun just stuck a 5-pounder. The fish came out of the highly pressures cypress trees. He was working a crankbait – a tactic that not many others are using. It seems like no matter what, these anglers are continuing to pay the cypress forests visits. Look for more big fish to come from the trees. 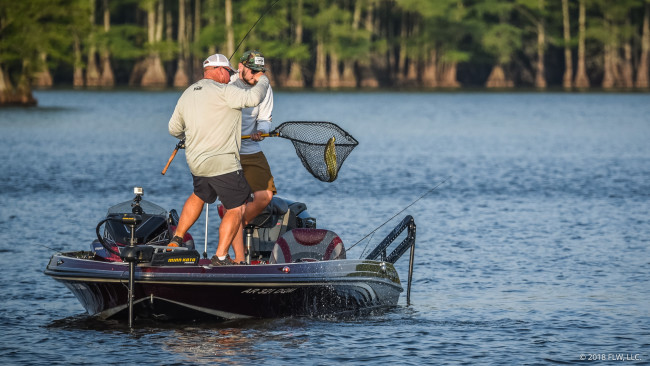 Rob Jordan gave island No. 3. a try. No fish. No bites. No action. Now he is throwing a Chatterbait along a rip rap wall on the main lake.

Deaver is now on the dock game. He just boxed his third fish – a small keeper.

LeBrun left the cypress trees to hit the duck blinds out in front of Richard Fleming Park. The first duck blind paid off as he caught his fourth keeper – a 1-pounder. Now he has four fish for 7 1/2 pounds. 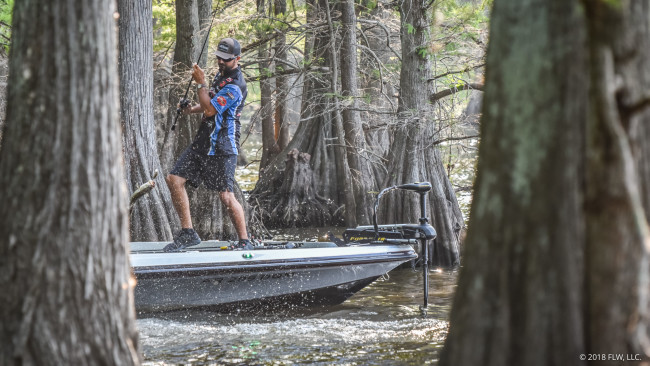 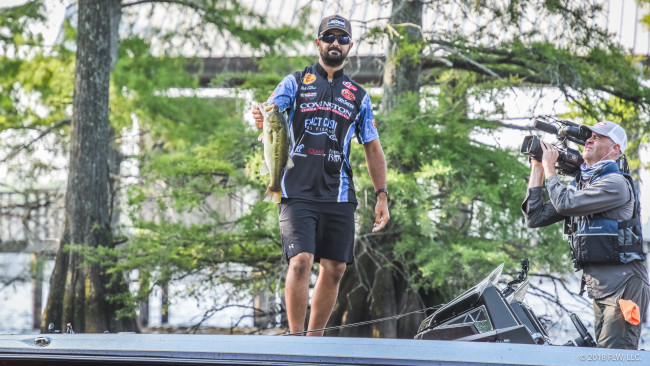 Nick LeBrun is starting to figure things out. He is fishing in an area where a lot of local tournaments are won. Right now, has caught three fish that go about six pounds. Those fish won’t likely win him the All-American but nonetheless he’s starting to catch.

Tyler Morgan has one fish in the box. As we pulled up to him he was winding a spinnerbait near cypress. His co-angler has two. Neither have caught anything with size but at least they’re around fish.

LeBrun has moved to the cypress trees near Richard Fleming Park. He’s still throwing his crankbait. If he doesn’t start catching it won’t be long until he starts throwing a frog. On a side note, the cypress trees aren’t just home to big bass. As we were following LeBrun around the trees we heard him let out a death defying scream. Once we got closer he told us he saw a snake sitting on a tree. Apparently, the Bossier City local has a phobia of snakes. Not a good scenario for a guy fishing around the trees!

Rob Jordan made a lap around an island he caught some on yesterday but didn’t catch any, so now he’s trying island No. 2. 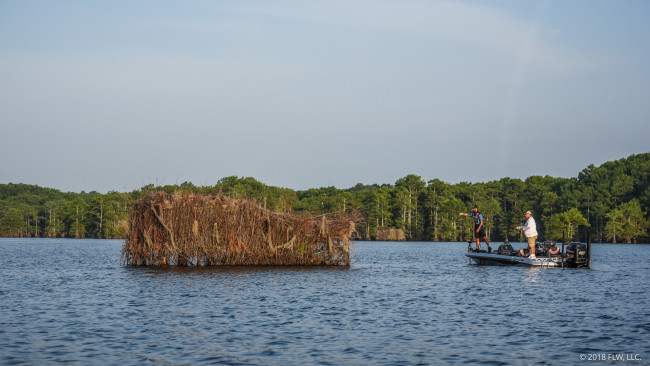 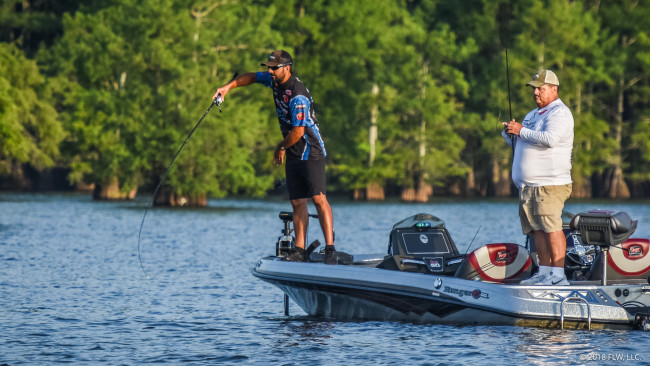 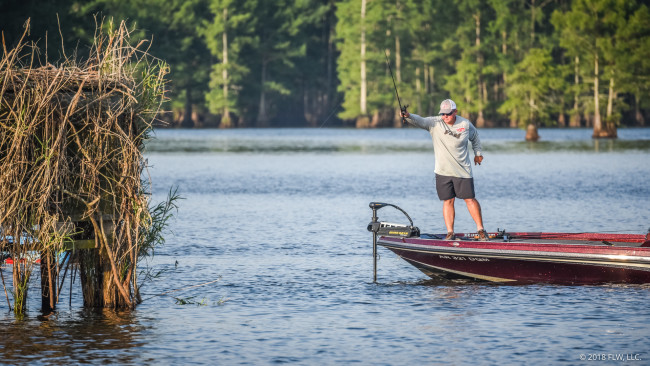 Despite not catching any, Fitzpatrick is on to something. He has now missed four fish on docks. They are hitting his topwater and flipping baits. He says he has not fished docks this early all week and he’s surprised by the number of bites.

LeBrun had his mind set to start on a certain duck blind this morning. However, tournament leader Deaver got there first. Deaver then proceeded to catch a 1-pound, 8-ounce keeper out of it. Now LeBrun has moved to the trees and is still working on finding a keeper. 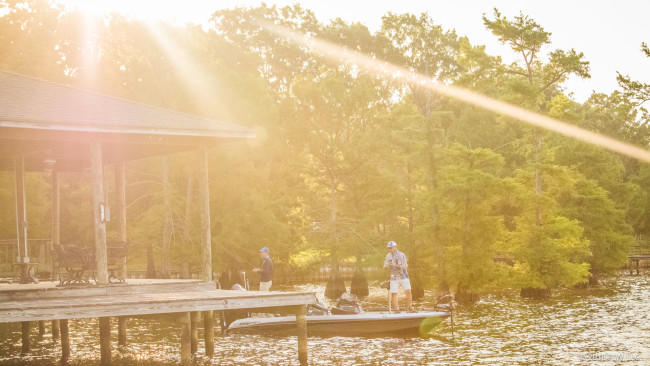 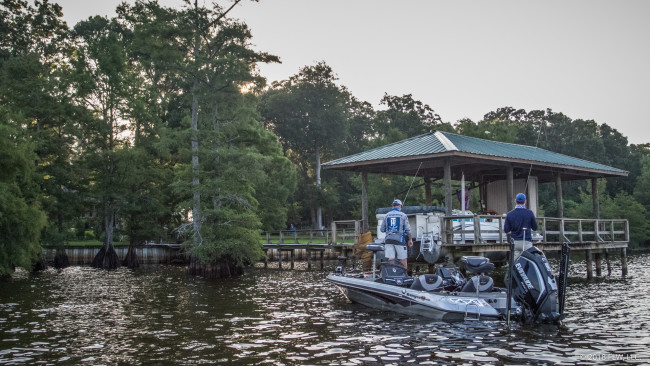 Roger Fitzpatrick decided to change up this morning and fish a bay on the north side. He said he has not had any luck in the morning anyway. He started out throwing a Strike King Sexy Dawg. Shortly after he picked up the flipping stick and missed one on a dock. If he can connect with a few the Missouri pro would be off to a good start. 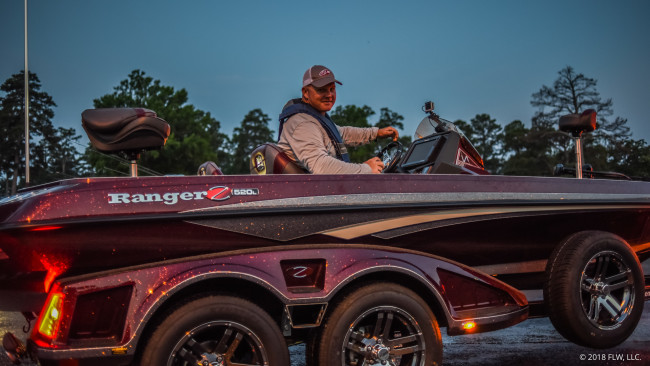 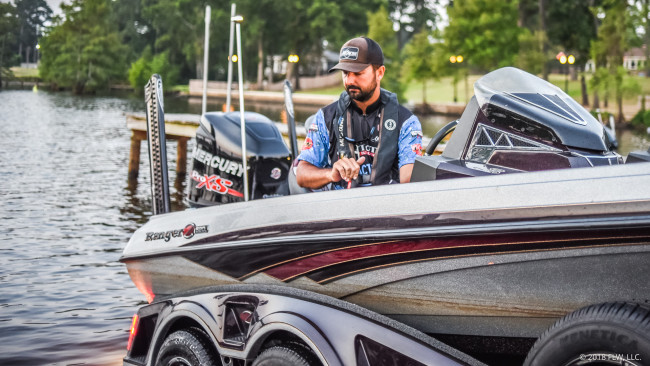 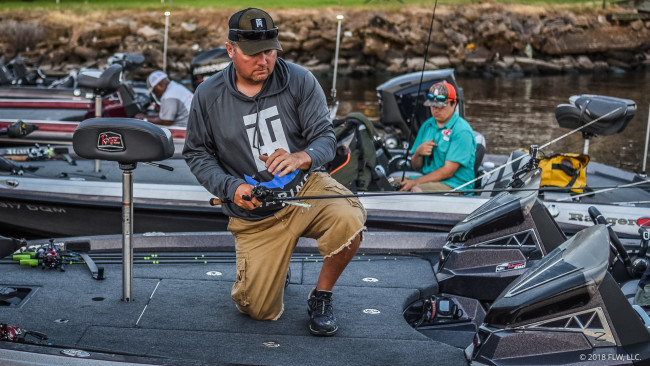 The T-H Marine BFL All-American field has been cut down to the top 10 anglers. Not to anyone’s surprise, the fishing pressure has taken its toll on Cross Lake. The western end’s cypress tree forest has been the most targeted area of the lake from the get go. And now anglers are changing their strategies to stay on the fish.

Local sticks Randy Deaver of nearby Blanchard, La., and Nick LeBrun of Bossier City, La., are leading the pack after two days. Their familiarity with the lake has allowed them to adapt to the fishing pressure the 8,576-acre lake has to offer. For the most part, the top five anglers have either moved off the cypress tree forest completely or are finding productive bream beads. We will see if these patterns hold true or os more adjustments are made.

One way or another someone is walking away with the All-American title – one of the most coveted and prestigious in fishing. The prize for winning includes $100,000 and an invitation to compete in the 2018 Forrest Wood Cup on Lake Ouachita. With so much on the line, expect to see some fireworks on the final day.