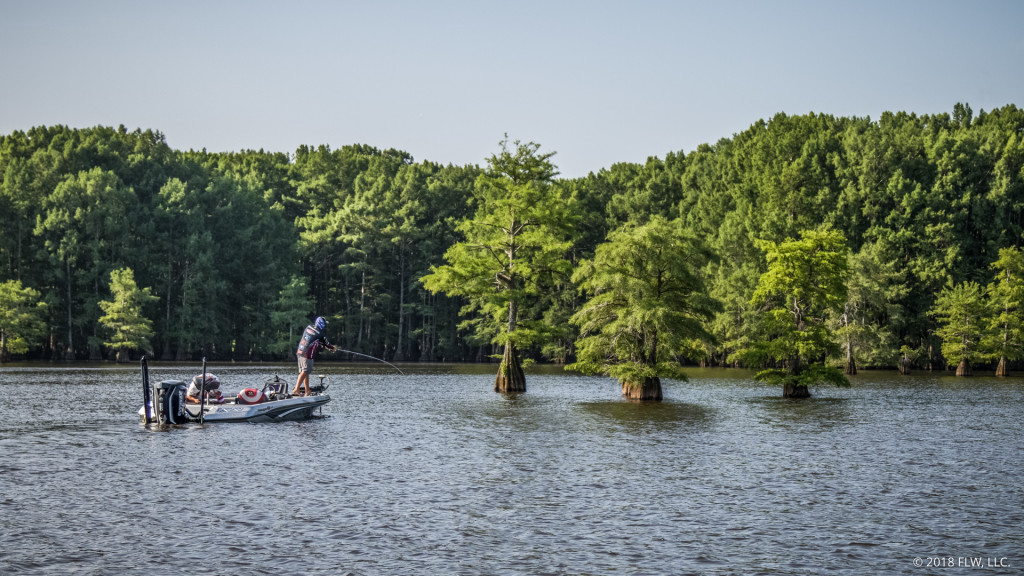 The 2018 T-H Marine BFL All-American is in the books and it’s safe to say that Cross Lake was quite a pleasant surprise. What was expected to be a sweltering, summertime struggle-a-thon turned into a rather impressive display of big bass, with multiple 4- to 8-pound brutes being shown off at weigh-in each day.

The conditions were still scorching, though, with much of Cross Lake’s main-lake water temps reaching into the 88- to 92-degree range. Cross Lake proved to be a healthy fishery and some believe the lake’s low water – down about 2 feet from normal – helped pull many of Cross’ swamp dwellers out of the backwaters and into more predictable locations.

Also, the All-American’s small field of only 49 pros and single official practice day helped limit the fishing pressure on the small lake before competition began.

The day one weigh-in featured eight limits over 20 pounds, with five of those being over 22 pounds. Tournament winner Nick LeBrun of Bossier City, La., caught the biggest limit on day one, tipping the scales to 26 pounds, 9 ounces. After day one, however, fishing pressure began to take its toll. Cross Lake’s cypress trees, duck blinds and docks were the primary bass-holding targets and after a barrage of baits had been soaked around them, the bass wised up.

With many of the top competitors hitting the same targets over and over, the name of the game became finding a different “look” to show the fish in terms of lures. While many competitors resorted to flipping finessier plastics during the week, LeBrun went the opposite way, force feeding the cypress tree bass with a big shallow running crankbait, intentionally contacting the tree bases to trigger reaction bites from big bass.

Behind him other top finishers struck it big with topwaters, jigs, finesse worms and Senkos. Here’s a closer look at how the top 10 fished Cross Lake. 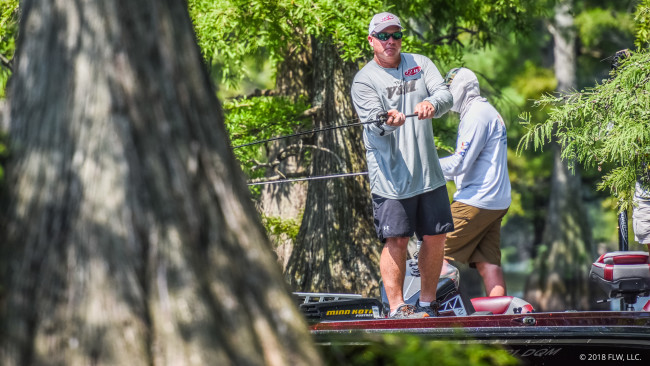 Going into the 2018 All-American, several local sticks were favorites to win, including long-time friends Nick LeBrun and Randy Deaver of Blanchard, La.

During the first two days, the two buddies swapped the lead. In the end, LeBrun prevailed but Deaver didn’t disappoint the hometown crowd either, bringing in 21 pounds the first day and an impressive 25 pounds, 3 ounces the second day.

Deaver admitted that being a local provided a sizeable advantage. Given the lake’s two primary bass covers – trees and docks – Deaver had enough historical perspective on Cross to know which clusters of trees and stretches of docks were best. In addition, he mentioned that one unique pattern that came into play at Cross was being able to skip much further up under docks due to the low water.

“I was able to access places under those docks you can’t normally get to because the water level is usually so close to the platforms,” he says. “But with an extra two feet of gap between the dock top and the water, getting a bait far up under the platforms opened up new opportunity.”

Deaver also says the timing of when to fish which trees and which docks during the course of the day was an added local benefit.

In the mornings, Deaver spent his time in the west end of the lake, fishing the cypress-rich bayous as well as a few duck blinds. After that he would work his way down towards the main lake, picking on specific tree clusters and docks.

Deaver did most of his tree and dock work with a 3/8- or ½-ounce V&M Pacemaker Flippin Jig (blue shadow) paired with a V&M J-Bug and 17-pound test fluorocarbon. When he wanted to lighten up or skip way up under docks, he went with a V&M Chopstick (on a ¼-ounce ballhead shaky head.

Occasionally small packs of bass would school on shad back in the trees, prompting him to fire a small squarebill crankbait into the melee for a bonus keeper or two.

3. Wagner goes finesse for big ones

Former All-American champion Adam Wagner of Cookeville, Tenn., brought in 22 pounds, 12 ounces on the first day to start the tournament in second place. That big catch was largely the result of finesse fishing a Zoom Trick Worm (tilapia) on a 1/8-ounce shaky head on 35-pound test braid to a 12-pound fluorocarbon leader on a spinning rod. Wagner hauled a majority of those big fish off points of cypress trees.

After day one, Wagner had to improvise to stay in the top five. On the second day he incorporated duck blinds into his program, flipping them with a Reaction Innovations Sweet Beaver (green pumpkin) topped with a 3/8-ounce weight.

On the final day he switched to a ½-ounce D&L Tackle jig with a Zoom Z-Hog Jr. to give his tree fish a different look.

Roger Fitzpatrick of Eldon, Mo., worked along main lake banks offering a one-two combo of flipping docks and throwing a topwater in between them.

A Strike King Sexy Dawg tied to 65-pound test P-Line TCB braid took care of the topwater duties while his flipping work was done with a Yamamoto Senko (black and blue) with a ¼-ounce weight tied to 20-pound test fluorocarbon.

“I focused on docks that were either point docks or had some deeper water under them,” Fitzpatrick offers. “If they had any brush or rock under them, those were good, too. I had three docks in particular that were really good – I caught multiple fish off each one during the week.” 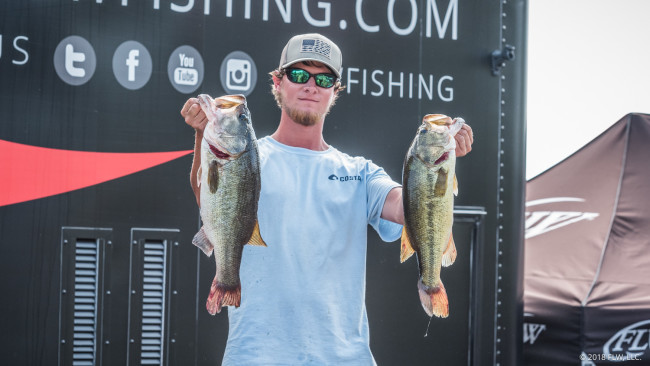 While others chose to get in specific areas and grind with slower tactics, Tyler Morgan of Columbus, Ga., went with a run and gun approach. Using a SPRO popping frog (black and yellow) almost exclusively, Morgan ran as many targets across the lake as he possibly could. His best areas had seawalls, docks and cypress trees all mixed together. Morgan primarily targeted the “inside line” found between cypress and seawalls.

“The higher the sun got during the day, the denser the shade got from those trees along the walls and that’s when the pattern was best,” Morgan details. “In the mornings, the shade was spread out too much and I think the fish would just roam those seawalls. But once that shade shrunk down and got limited, it positioned the fish a lot better.” 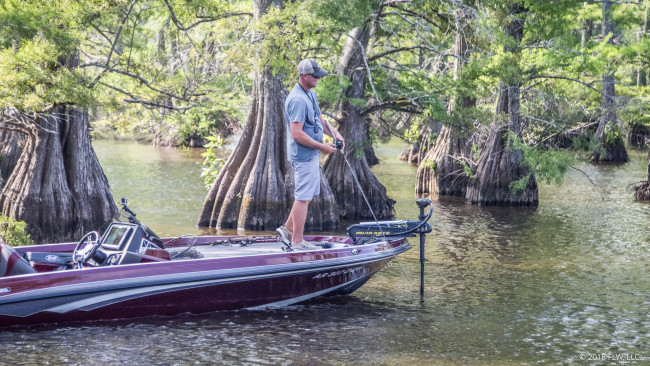 6. Duval mixed a frog and a jig

With his scouting time limited to just the single day of official practice, John Duvall of Madison, Ga., uncovered one key dock that accounted for about half of his catch during the week.

“I fished a lot of docks, but this one was special,” he says. “It had other docks around, but it was a little bit deeper and was in bad shape – it was missing its walkway and had a dilapidated platform, which was not really that big when compared to some of the other docks around it. But for some reason there was a whole school of bass under that thing. I caught multiples out from under it each day – it was crazy.”

To mine the fish from the dock, Duval relied on a ¼-ounce Katch-Her Lures finesse jig paired with a Zoom Super Chunk in green pumpkin orange fished on 20-pound test Seaguar InvizX.

To fill in time while letting the “magic dock” rest, Duval fished a lot of new water each day with a SPRO popping frog in killer gill tied to 100-pound test braid.

“I had one good stretch of bank with trees that produced a couple of good fish, too.” he says. “Other than that, I would just run new water every day and eventually run into a 3- to 5-pounder off something I had never fished before.” 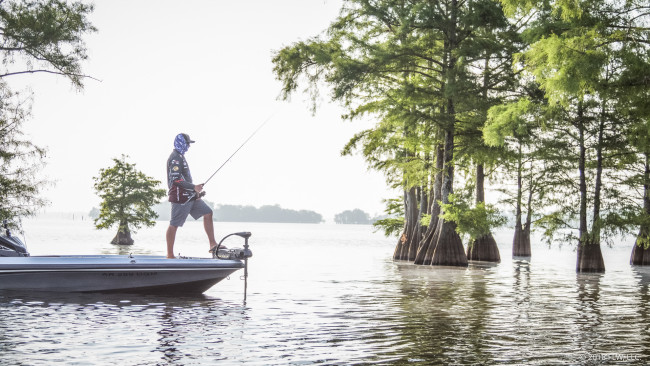 7. Power and finesse worked for Jordan

Part one was finesse. As he neared clusters or points of cypress trees, he would stay way out, making long casts to the outside, more isolated point trees. His finesse outfit included a spinning rod with 20-pound braid and a 12-pound test fluorocarbon leader tied to a 1/8-ounce shaky head teamed with a variety of worms.

Next came the power: After tricking any outliers with finesse, he moved inside the tree clusters and attack them with a Z-Man ChatterBait Custom. The Chatterbait was black and blue and teamed with different swimbaits including a Z-Man SwimmerZ. 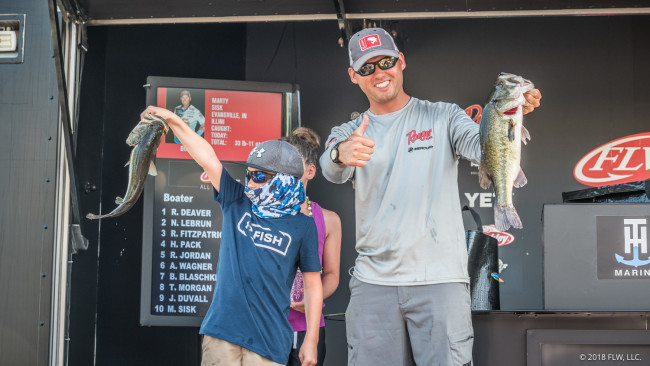 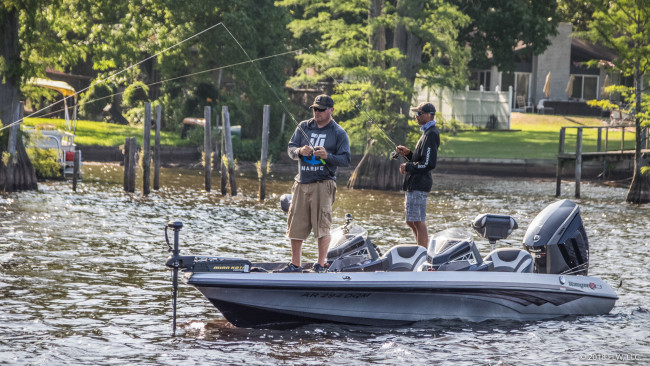 Health Pack of Ellijay, Ga., went with a one-two combo of topwaters in the morning and flipping trees in the afternoon to finish ninth.

Pack targeted rock and rip rap points along the main lake in the early morning hours with a River2Sea Whopper Plopper 110 (loon) tied to Seaguar Kanzen braid. Once the sun got up and the topwater activity died, he moved to trees and docks to flip a Strike King Rage Bug (blue with black flake) with a ¼-ounce weight on 25-pound test Sunline Sniper fluorocarbon. 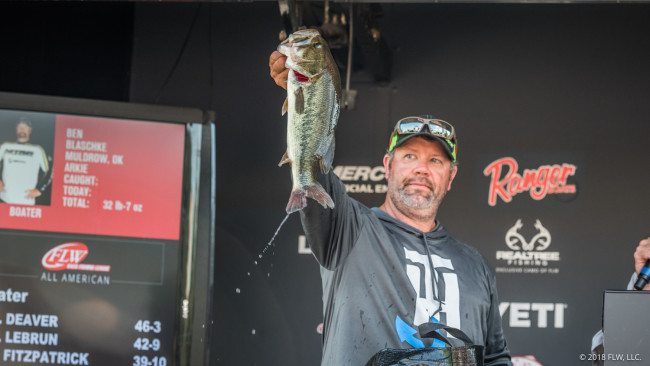 Ben Blaschke of Muldrow, Okla., spent much of his week wacky-rigging a DHP Stick on key cypress trees on points with 20-pound test fluorocarbon on casting gear. When covering water in between the point trees, he used a ¼-ounce Brandenburg Swim Jig with a twin-tail trailer.