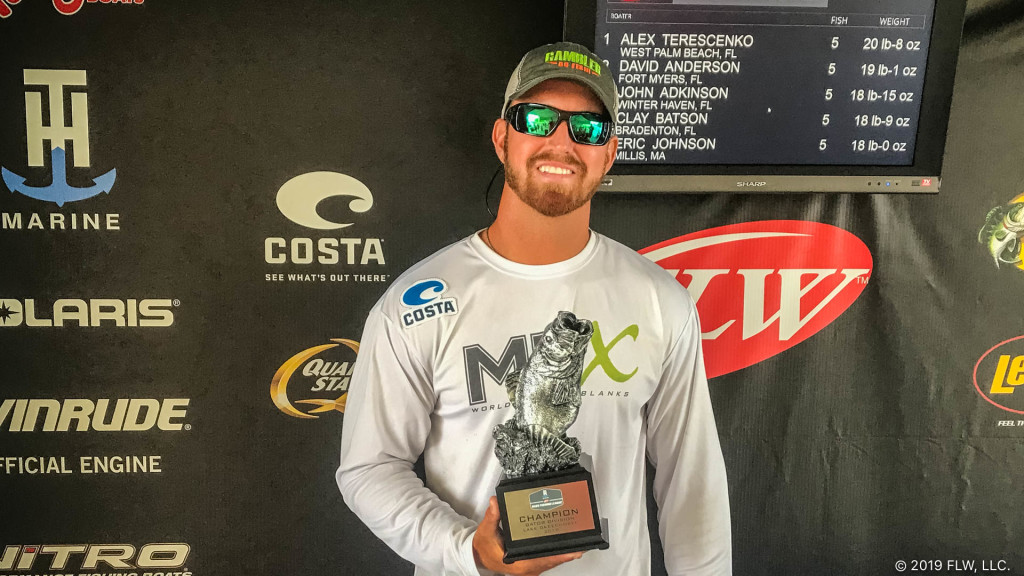 “The lake has dropped 6 inches in the past week, so I was pretty much in open water casting to the outside grass line on the north end near the Tin House area. The cleaner water drew me to the area,” says Terescenko, who notched his first career win in FLW competition. “I fished a 60-yard stretch. During practice I fished through a lot of water, and the rule of thumb on the lake is finding where the dirtier water meets the clean water, and that stretch was where it happened.”

Terescenko caught his fish on a Texas-rigged, Ice Breaker-colored Gambler Lures Big EZ swimbait on a 5/0 Gamakatsu SuperLine EWG Offset Hook and Gambler Lures Hollow Point. He also used a Texas-rigged, Gold Rush-colored Gambler EZ Vibez Swimbait on the same Gamakatsu hook, but 4/0-sized, and a Hawgtech 3/8-ounce tungsten weight with a black and blue-colored punch skirt. He adds that he caught all of his fish on a custom MHX MB904 rod.

“The first thing in the morning I heard fish busting on top eating shad, so I ran the Big EZ over the top of the grass,” says Terescenko. “After they stopped showing on top, I switched to the Vibez swimmer and slow-rolled it just below the surface. I prefer this over a swim jig in heavier grass because the swimbait is Texas-rigged, making it more weedless than a swim jig. Also, the punch skirt from Gambler gives the same flair effect of a swim jig.”

At 11 a.m., Terescenko let the area rest. He ran to some spots that he’d had some success at recently, but found them to be unproductive and ended up returning. In all, the Florida boater caught about 12 keepers throughout the tournament.

Dean Meckes of Clayton, New York, caught a 7-pound, 11-ounce bass – the heaviest of the event in the Boater Division – and earned the day’s Boater Big Bass award of $460. 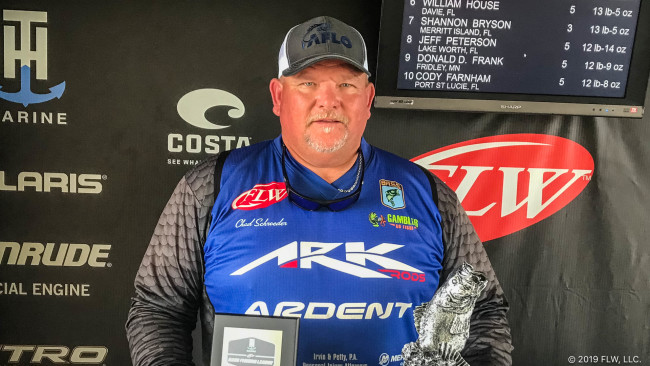 Schroeder also caught the largest bass in the Co-angler Division, a fish weighing in at 9 pounds even. The catch earned him the day’s Co-angler Big Bass award of $230.

The tournament was hosted by the Okeechobee County Tourist & Development Council.