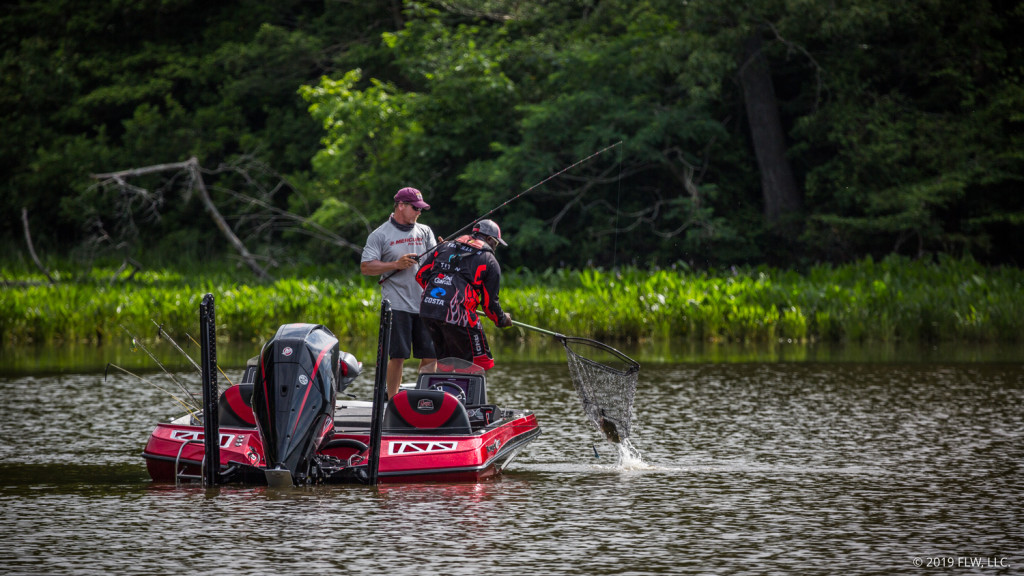 Day one of the T-H Marine Bass Fishing League (BFL) All-American started slow, but the bite is undeniably picking up this afternoon. The tournament, which is presented by General Tire, took off under summery conditions, and it’s only gotten hotter as the day has gone on. Luckily, the weather doesn’t seem to be bothering the fish very much.

As far as weights and leaders go, the FLW Live Leaderboard pretty much tells the story as we know it. Up at the top, Lloyd Picket Jr., Doug Ruster and Joseph Thompson have all bumped up over the 14-pound mark, and plenty of anglers are getting into the double digits and low teens behind them.

The fishing was pretty slow this morning on the outgoing tide for a lot of anglers. Scott Beattie really took advantage of it for a while, though, and some others surely did, as well. That said, the incoming tide seems to be better today, with quite a few anglers adding fish or upgrading in the last hour or so.

With the grass very noticeably lacking, the usual community grass bed pattern has only partially developed. Though there have been plenty of anglers winding stuff over grass, there’s also been lot of hard cover and current-related action. It’s a little too early to say how things will be won, but if the day’s trend holds, we’ll certainly see a lot of the top 10 fishing hard stuff, and maybe even a few folks doing some really off-the-wall Potomac things.

A few boaters have lost big ones, but so far the co-angler side has landed the most fish over 4 pounds. When the live weigh-in starts at 3:30 p.m. ET, we’ll surely see some big ones. If the afternoon bite stays good, we’ll likely see a lot of decent bags in general, even if weights aren't quite up to par with what the Potomac is known for this time of year.