Floyd Cashes in on Guntersville 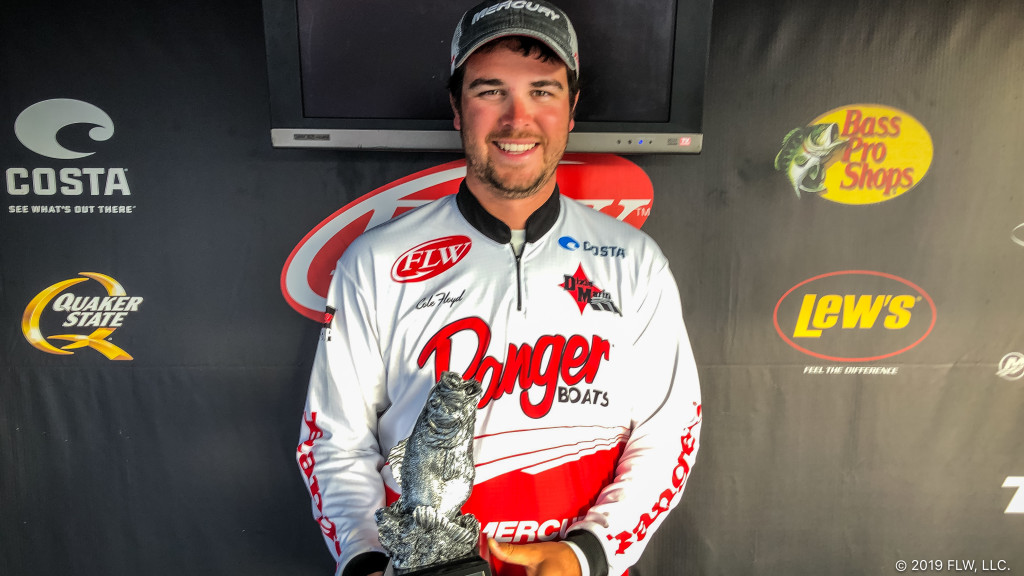 At just 22 years old, Cole Floyd has already established himself as one of the premier young anglers in the Mid-South. His aptitude on Kentucky Lake (and the Tennessee River system in general) is setting up the Bethel University student and YETI FLW College Fishing standout for a stellar pro career when the time comes.

Last weekend, Floyd added to his already lengthy list of accomplishments with a T-H Marine Bass Fishing League (BFL) Regional victory on Lake Guntersville – the tournament was presented by Mercury – with a 44-pound, 15-ounce three-day total, and it all came down to consistency and some really good decision-making.

“The first day I fished an area, and it was just a bunch of schooling fish that were just keepers,” he explains. “I tried to start there and catch a limit, and then I’d go to try to get a big bite or two. As tough as it was, I knew 14 pounds would be pretty good.”

He came up just short of that mark on day one with 12 pounds, 6 ounces, but the spot at which Floyd caught his schooling keepers on day one was good enough to return to each day to get a limit and some confidence for the rest of the day.

He was able to catch one 5-pounder there, but otherwise used it just as a limit spot. After that, his plan worked perfectly, as Floyd caught one or two big ones after he left.

Floyd, who won the LBL Division Angler of the Year title this year for the third year in a row, knew the tough fall conditions on Guntersville would call for some flexibility. After leaving his starting spot, Floyd fished new water every day and “junk-fished” for the most part, weighing in all his fish on several different baits: a Strike King Sexy Dawg, a Strike King Thunder Cricket with a Strike King Rage Twin Tail Menace trailer or a Strike King Rodent with a 1/2-ounce tungsten weight.

The Sexy Dawg, which did the heavy lifting to the tune of 16 pounds on day three, was perhaps the real key bait for Floyd’s victory, though.

That move to fishing topwater in the river on day three was exactly the kind of adjustment needed to win a tournament. Despite mainly keying in on grass early on in the tournament, Floyd and his co-angler, Dalton Steele (who would also go on to win), called an audible after struggling to start the day fishing shallow grass. It paid off for both of them.

Still, there was one other area – more of a specific spot, actually – that was critical for Floyd. It’s a place where he was able to repeat one particular flip each day to buoy his winning total.

The Leesburg, Ohio, native plans to make a push to fish professionally when he graduates from Bethel. For now, Floyd is just focused on adding more wins to his resume.

“It feels good,” he says. “I finished second the last couple years a handful of times, and I really didn’t think I was going to win. I thought I was going to get another second place. To finally pull one off and win a boat and everything is a pretty cool deal. I’m just excited.” 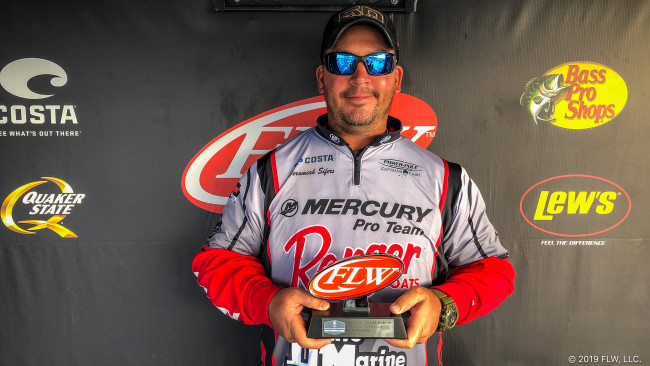 Floyd and Jeramiah Sifers are good friends, and the pair roomed together for the tournament. The former went on to edge out the latter by just 10 ounces, but you won’t hear Sifers complaining.

“If I was going to lose, I couldn’t lose to anybody better,” he says. “I call Cole ‘Little Bryan Thrift.’ As much as I would have loved to win, I’m never going to do this full-time. For Cole and his career, winning a Regional looks awesome on his resume, and I’m very, very happy for him. He is a stick. He can catch them anywhere.”

The 38-year-old tow boat captain, who hails from New Albany, Ind., spends half the year on the Mississippi River, mainly between Cairo, Ill., and St. Paul, Minn. He works 28 days at a time and then has 28 days off, which set up perfectly this year for the Hoosier Division veteran to instead fish a full season in the Mountain Division, in which he finished the year in fourth place.

“I looked at that schedule, and I was off for all five of them [Mountain Division events],” says Sifers. “It worked out for me to fish this, and that’s what I did, and had a heck of a year.

“I should have won the points. I was late at Cumberland, and it cost me about 13 points. I got greedy, and I was catching them so good down there. It took me longer to get back than I thought.”

That wasn’t an issue for Sifers at Guntersville. He fished a clean event with very little in the way of slip-ups. His big bites just went away on day three, when he weighed in just 13-12, and losing a couple fish didn’t help his cause.

“I got up there [to the river], and I kind of got spun out,” he admits. “I was fishing a creek where I had hammered on them pretty hard in the past two days.

“We pulled up and I caught a good keeper, and then I caught my best fish of the tournament. I lost two more. We got back there, and I was flipping this tree and my co-angler threw to the other side of the creek and caught a 4 1/2. It was a key fish, but, hey, it wasn’t meant to be. If it was mean to be it would have happened.”

While Sifers generally prefers flipping – he says he’s won several tournaments flipping deep wood in the middle of creeks – it was moving baits that did the heavy lifting during this event. Sifers relied on a homemade buzzbait with a generic 4.8-inch swimbait trailer, a 1/2-ounce Z-Man/Evergreen ChatterBait Jack Hammer with the same trailer and a Paycheck Baits Repo Man topwater to target wood in and around grass.

“I was targeting mostly wood and grass,” he explains. “You had to have wood and grass. I got probably more bites flipping than I did anything, but my flipping bites … I’d catch 20 fish, but you’d be doing good if they were keepers. 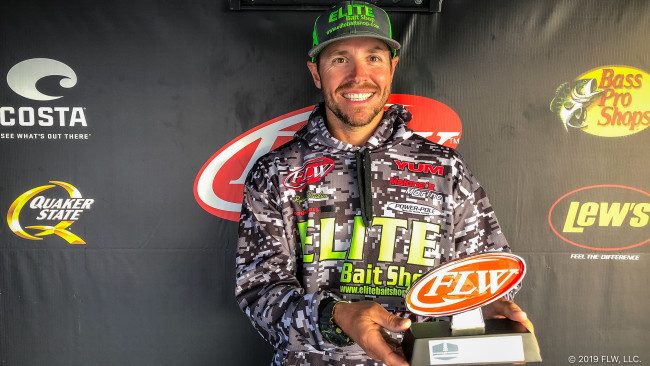 Davidson flips his way to third

Ryan Davidson of Branchland W.Va., only needed three rods on his deck at any given time, all rigged up with the same bait, to weigh in 42-7 for the tournament for a third-place finish.

Each 7-foot, 9-inch, heavy-power Powell Endurance rod was rigged up with 50-pound-test braid with a 3/0 Gamakatsu Super Heavy Cover Flippin’ Hook and a YUM! Bad Mamma in black blue flake. The only difference between each rod was the size of the tungsten weight he had pegged on his line.

“I want the lightest weight that will go through the mat 80 percent of the time,” he explains.

For that approach, Davidson cycled between rods and targeting grass in various depths. He says he didn’t necessarily look for anything in particular. It was all about covering water.

“I’d fish for an hour and not get a bite, and then there’d be a 30-yard stretch and I’d get five bites,” he explains. “You’d have to cover lots of water. One of the keys for me is I probably cover as much water with a flipping bait as most guys do with a winding or moving bait.

“It’s being familiar with grass fishing, and that’s one of my strengths. When I get an opportunity to do that, that’s what I want to do.”

And he did it well. Despite Guntersville having not experienced enough cold weather to push a lot of fish up shallow under mats, and the water being below normal pool for this time of year, Davidson made the most of his bites on days one and three. Unfortunately, some missed opportunities on day two ultimately did him in.

“I got the bites, but I just didn’t land them,” he admits. “I had four fish to the net and didn’t land them. One was a 5- to 7-pounder, and another was a 4-plus. Those two bites alone would have put me back to where I weighed the third day – a 17- or 18-pound stringer. My execution was just off.”

Still, stumbling on day two allowed Davidson to relax and “just fish” on day three, knowing winning would be a long shot. He says he calculated what it would probably take to make the All-American. After securing that much in his livewell early in the day, Davidson was able to settle in and weigh in what ended up being the largest bag of the tournament at 17 pounds.

“My execution was spot-on the last day,” he adds. “Things just went my way.” 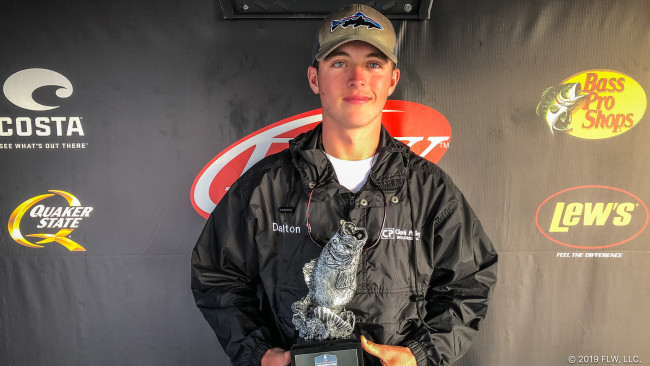 At 17 years old, Dalton Steele of Cherokee, Ala., is off to a great start to what he hopes will be a long fishing career.

After fishing a full season in the Mississippi Division last year (finishing 71st), the high school senior turned in four top-35 finishes in four events in 2019, including a fourth-place finish at his home lake of Pickwick in May. Steel improved to a 14th-place points finish in the co-angler standings.

He parlayed that strong season into a win on Guntersville with a three-day total of 28-2 that included a bag of 16-5 on day one – the largest bag of the day for boaters or co-anglers.

“We [Steele and Blasingame] struggled the first two days and really just tried to find some mat fish flipping and frogging, but we ended up the last day the last two or three hours finding a good ChatterBait bite,” says Steele. “That’s really what I stuck with throughout the tournament.”

Steele followed up his big day-one bag with a disappointing 3-14 stringer on day two, thanks in part to a change in conditions that led to winds blowing out several of his boater’s grass spots. He slipped to second heading into day three, but Steele wasn’t dismayed.

“I just told myself the whole time I could win this thing, and I tried to stay positive with it,” he admits. “I only had two bites, but they were the right ones on day three.”

Those two bites added up to 7-15 on day three, which gave Steele a 1-ounce victory over second-place co-angler Joel Ross.

Fishing with Cole Floyd on the final day was fortuitous for Steele, who put down the ChatterBait in favor of an ima walking bait to catch his winning fish.

“The third day it was the same thing,” he says. “We pulled up to the first spot and struggled. We ended up doing something completely different and running all the way upriver and throwing a spook [topwater].

Steele plans to keep the Ranger Z518L he earned with the victory to potentially fish on the boater side next season in pursuit of his goal to fish professionally sometime in the future. He’s currently kicking around fishing in college while he studies business and finance.

(The top six co-anglers qualify to fish the 2020 BFL All-American.)