Odd conditions are keeping the anglers on their toes 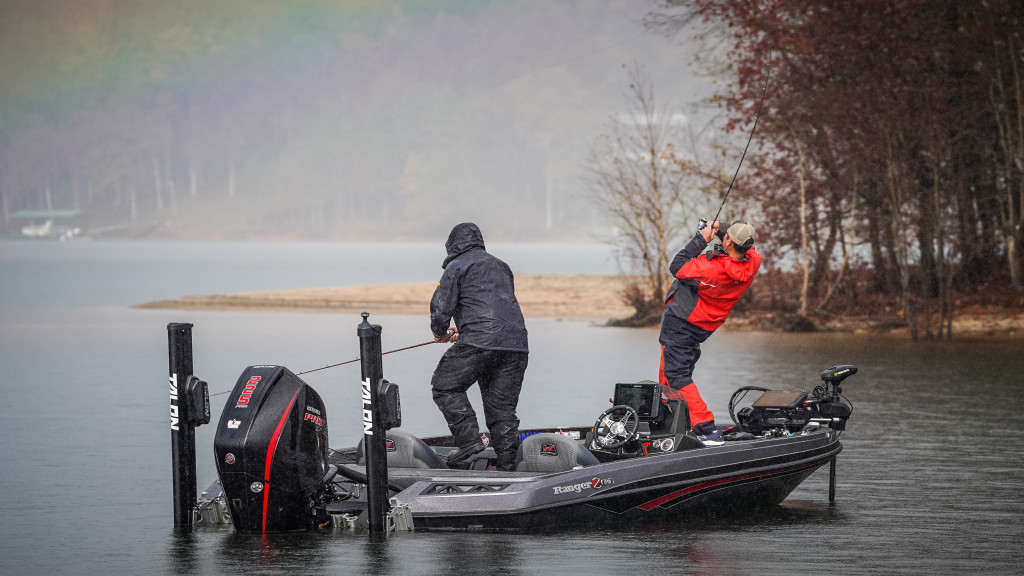 Day one of the Phoenix Bass Fishing League presented by T-H Marine All-American presented by TINCUP hasn’t been quite as wet as anticipated, but it’s still offered far from ideal conditions for offshore fishing on Hartwell. So far this morning, nobody has distanced themselves, but there’s still plenty of time before weigh-in.

Most of the anglers we’ve seen have been fishing down the lake, though there are a few notable exceptions. For instance, Kip Carter and Jayme Rampey both started waaaaay up rivers. Carter chose the Tugaloo, and Rampey went up the Seneca.

Down the lake, most of the anglers are fishing schooling fish offshore or offshore cane and brush. Mitch Crane was on a shoal with literally hundreds of fish breaking this morning, but they proved to be very hard to catch. Ryan Davidson was throwing the tacklebox at fish breaking literally feet from his boat with no success just around noon.

So far, the best baits seem to be a drop-shot or a shaky head. Michael Miller has more than 10 pounds and is throwing a shaky head, and Rampey caught his two limit fish on one. Still, a ton of anglers are slinging umbrella rigs, topwaters, flukes and swimbaits.

Rampey says that he lost a 3-pounder and a 5-pounder up the river this morning. If he had them, he’d be having a banner day. As is, he still hadn’t fished his good stuff around 11 a.m., and was simply filling a limit. Rampey seems to think that a window of sun should get the offshore bite right for perhaps an hour today. It’s likely that window is right now, as it’s been fairly bright for a while now and more rain is headed this way.

The live leaderboard is moderately updated, but there’s enough mystery that we’ve got a lot to settle at weigh-in. The anglers will start checking in at 3:30 p.m., and weigh-in starts live online at 4 p.m. ET.